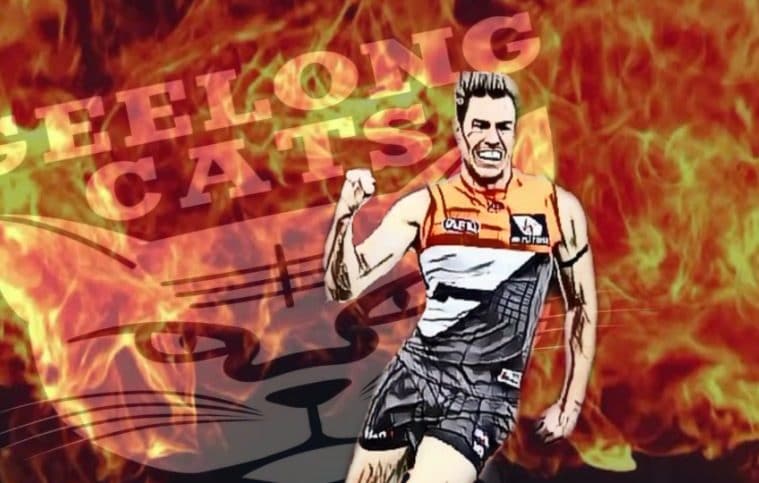 The weight of expectation of the Greater Western Sydney Giants was at its heaviest last September.

After years of threatening, the Giants finally made the last day in September after a thrilling finals series that saw them shed the “millionaire” tag that plenty had attached to them over the years. They brutalised the timid Western Bulldogs, targeting their captain and daring the Dogs to respond.

They didn’t, and the Giants progressed.

Next came the Brisbane Lions, but a spirited display from the Giants to hold on and stand up under intense pressure in the final quarter saw them move into the Preliminary Final.

There, they met a Collingwood team most expected to win and have their shot at redemption after dropping the 2018 decider to the Eagles. But again, it was the toughness and ability to take punishment that saw the Giants hold off a Magpie team that threw absolutely everything at them in the manic last quarter.

The Giants were there – the Promised Land of the AFL Grand Final. After less than a decade, the team that was destined for success seemed about to achieve its destiny. The only thing standing in their way was the Richmond Football Club; the dream destroyers over the last few AFL seasons.

To say the Giants were poor in their maiden Grand Final would be overselling their performance. They were insipid; beaten from pillar to post by a team that treated them with contempt. Entering the game to the “big big sound” of their theme, they gave but a whimper as the Tigers rampaged to the 2019 flag.

There were only two ways for the Giants to go from here. They either knuckled down and redeemed themselves, or they fell into the category of those unable to back up after a humiliating Grand Final loss.

And we know where the Giants finished this season.

And so, as the GWS Giants reeled from a disastrous 2020 campaign, many questions surfaced about the club. They were quick to hose down any speculation as to the future of their coach, re-signing Leon Cameron to a further two years before the team had even qualified for finals. That can either be seen as incredibly confident in their coach’s ability, or a little premature.

No one was kicking down the door of the Giants to sign Cameron away. No one was putting moves in place to make room for him at their respective clubs – why the rush?

But the Giants, in the midst of a terrible season by their standards, had something else to worry about – their star forward was out of contract, and as the season progressed, it became more and more of a worry.

Round 18 marked the end of the GWS season. Bundled out in unceremonious style by successive losses to Melbourne and St Kilda, the Giants finished a disappointing tenth. In 2019, they were one step away from finals. In 2020, they were two steps away from qualifying for finals – an unmitigated disaster for a “win now” club.

And as the finals progressed without them, the news got worse. Aidan Corr didn’t even bother with the Round 18 fixture, announcing that he was out the door. Not a great loss, I hear you thinking? Maybe from the outside looking in, but Corr was one of the better-performed Giants defenders in the second half of 2020. His loss will be felt.

Worse still, the news came that Zac Williams was looking at heading to Carlton to play as a midfielder in 2021.

In truth, I am not sold on Williams in this role. Carlton are banking on him being able to replicate the blistering form he showed in the latter half of 2019, when the GWS midfield took injury hit after hit and Williams was shifted into the guts. However, he was definitely unable to reproduce anything like that form in 2020 and to me, looked just a touch out of shape.

Playing 11of a possible 17 games, Williams took his three-season total to 36 games out of 66. Though many people are saying Williams is a huge loss, I don’t think that will be the case, and Carlton would be hoping he is in tip-top shape or they may suffer a little buyer’s remorse in a year or so.

But Williams’ departure, as damaging as it may end up being to the Giants, paled in comparison to what happened next – Jeremy Cameron announced his intentions of leaving the team and heading to… of all teams, Geelong.

Despite the instant reaction that free agency isn’t working and that the rich were getting richer while the poor were getting the picture – thanks Peter Garrett – something that leapt to mind for me is just what Cameron is getting himself into with a move from one contender, albeit it one that fell over this season, to another. Yes, he is giving himself another chance at success, but he is also putting the pressure on himself to perform.

A repeat of his horrid 2020 season won’t be swept under the carpet as easily in Victoria as it has in what is ostensibly the AFL’s wasteland for big media coverage – Western Sydney.

Looking at Cameron’s 2019, what have we heard? During game broadcasts, there has been the occasional mention of him not having a great year, or not being in excellent form, but as far as scrutiny goes, he has skated through 2020 barely causing a ripple in the AFL Media’s coverage of the game.

GWS don’t sell newspapers and they don’t get clicks in abundance. Despite ticking over 30,000 members, the club is not a big fish in terms of media attention. They have been an on-field power for several years, but it seems that unless someone is doing something horribly wrong in the eyes of the footy media (Toby Greene), they just don’t seem to care.

So, as Jeremy Cameron compiled nine of a possible 17 games where he kicked one goal or less, you hardly heard a word about it. Yes, anyone who follows footy knew about his struggles, but where was the blowtorch on Cameron as he meandered around the field looking slightly disinterested? It seemed to be there for his coach. It seemed to be there for his new captain. But where was the heat for the spearhead coming off a Coleman Medal?

Goalless in four games (as opposed to just twice in 2019), Cameron’s goals per game average dropped from 3.17 to 1.41 in a single year – 55% fall. Yes, the quarters were shorter, but he was finding it incredibly difficult to get into games in any way. Or perhaps he just wasn’t keen on risking his body for a club he had no intentions of being at following this season?

Cameron’s average of 1.41 goals in 2020 is the lowest of his career. Yep, he averaged more in the struggling GWS team that was belted so often in their debut season. That’s how bad he was going this season.

So, humour me for a moment – if he was to have a season commensurate with this one in 2021 wearing the hoops of Geelong, how do we respond? Do we look at his 2020 numbers and performance and simply think that is where he’s at right now?

He’s 27 years old – these are his peak years, and he went backwards. He cannot repeat this kind of insipid performance.

Anything even remotely resembling his 2020 form would be a huge letdown for Geelong, particularly as it looks as though they will be paying a premium for his services, both in terms of his wages and what they have to give up to get him. And I would expect that the media would be far less lenient with his returns than they were this year. The Herald Sun sells pretty well in Geelong.

Jeremy Cameron likes the good life, the relaxed life – fishing… the outdoors. I was thinking of a phrase to encapsulate what his move to Geelong may mean. I thought of the old “out of the frying pan and into the fire” idiom, but it didn’t quite fit.

You see, at this stage of his career, Cameron has never actually even been in the frying pan. He’s been playing his footy in a really good side for the past few years and whilst he has not reaped the ultimate reward, he has never had the heat turned on him. His position has been more akin to a pie warmer than anything like an open flame.

That is all about to change.

Jeremy Cameron at Geelong could be wonderful. He may create the sort of one-two punch with Tom Hawkins that sides would envy. He could have a career resurgence after a terrible 2020 and rocket back toward the top of the Coleman race.

Or he could offer up a repeat of what was a pretty dismal season.

And then, he will learn what it is like to be in the frying pan. All of a sudden, that pie warmer might start looking real good again.