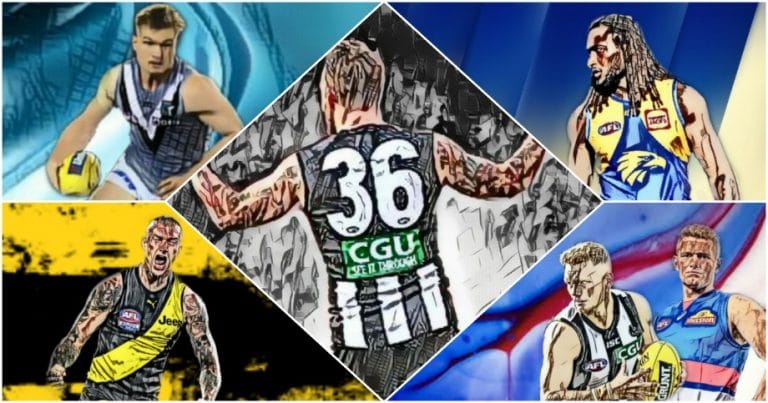 Here at The Mongrel we love to do things a little differently. Last year we introduced the first of our annual specialised awards – The Pluggies, for the best offensive efforts of the season, but far from being entirely swayed by those who kick bags of goals, we’re looking to be an equal-opportunity award giver.

We then went on to award The Doullies for the most outstanding defensive efforts of the season. Both of these awards had their second incarnations over the last couple of weeks.

And so, we’re now looking at the mids.

But wait, isn’t the Brownlow the midfielders’ award anyway? Well, yes it is – nice pick-up; I can see I’m dealing with some sharp cookies, here. We’re more about drilling down into the nitty-gritty of the midfield. Who was best at getting their hands on it first? Who created the most damage going forward? Who did the best tagging job of the season? And who is the man who… ummm, did other stuff that I haven’t yet finalised… better than everyone else?

Initially, I wanted to call this award “The Juddies”. I thought it had a bit of a ring to it, but the more I thought about it, I came to the conclusion that I didn’t want an award named after Judd. I thought it might start taking itself too seriously. I needed an award named after someone that doesn’t think too highly of himself… or at least doesn’t mind taking the piss out of himself. Someone like… Dane Swan?

And just like that, the award for mids from the site not taking itself too seriously was born. In honour of the former Collingwood champ who seems to give less than half a toss about the people who have a crack at him, we have our second annual Swannies. It’s not the Oscars, not the Logies (thank god), and it certainly fits right in with the Pluggies and Doullies.

Ladies and Gentlemen, I give you, the 2020 Swannies. Let’s kick it off.

AND THE WINNER IS… OLLIE WINES

In the best game of the year, the man who put up with so much conjecture around his future over the last couple of years really put his hand up and became the leader Port Adelaide were hoping he’d be 12 months earlier.

Against the highest quality of opposition, Ollie Wines took on the might of the Richmond midfield to notch 28 disposals and a goal.

But that tells only part of the story – Wines was a complete warrior, also setting the pace with ten clearances and 11 tackles. Seven of his disposals drove Port inside 50 and 22 of his touches came in the contest.

On a day where he shared the spotlight with Travis Boak in an incredible win for Port, Ollie Wines finally came of age. Now, having recommitted to the Power, at 26 years of age, Wines will be the one to lead the Port midfield as they look to go a step further in 2021.

THE JOHN HOLMES “Hey, that’s some mighty good tackle you have there” AWARD for the best tackler in the game

AND THE WINNER IS… HUGH GREENWOOD (GOLD COAST)

If there were ever a recruit you’d label an absolutely perfect fit for a club, it would have to be Hugh Greenwood at Gold Coast in 2020.

The former Crow, starved of opportunity in Adelaide, packed his bags and headed to Queensland to automatically become the Suns’ best inside ball winner and from the outset, he led by example when it came to physical pressure.

In shortened game time, Greenwood had 10+ tackles in four out of five games, with the next game seeing him register nine. He was a monster when the footy was there to be won and gave the Suns a presence in the middle that simply refused to be swept aside by strong-bodied mids.

With five of the top 11 games for tackles in the league in 2020, when Hugh Greenwood lays a tackle, you stay tackled.

AND THE WINNER IS… PATRICK CRIPPS

His mighty shoulders may have been unable to withstand the weight this season, but the clearance work of Patrick Cripps can never be questioned. His ability to read the tap and claim possession is the best in the league on a consistent basis.

Against a high-quality midfield, Cripps aided his Blues in setting up a win through the first three quarters before the entire team stopped to a walk and almost let the Cats back in.

After the season, he went in for shoulder surgery, which speaks volumes about his commitment to the team. He probably could have pulled up stumps after the Blues were knocked from contention, but he is a warrior, and when there is a clearance to be won, Cripps is the man.

AND THE WINNER IS… JARRYN GEARY

I love when an unsung player stands up and does something to make his supporters proud, and that is exactly what we got from the St Kilda captain as he was given a job in Round Five.

Sam Docherty tore the competition to shreds in his first four games of the season. Averaging 26 touches per game and an incredible nine rebound 50 disposals to accompany those numbers, Brett Ratten had seen enough. Geary headed forward and stood next to the Carlton co-captain and by half time, we saw Docherty moved to the wing to get him into the game.

Doc was able to amass seven touches in the first half, but Geary got away from him, kicked two goals and helped set up the Saints’ win.

Many have commented that Geary isn’t a best 22 player at the Saints, but if he can conjure performances like that a couple of times per year, his value to the St Kilda team increases immeasurably.

And before you start, yes, I am aware that Geary is a defender by trade and he didn’t play midfield in this game. I guess when you run the awards you can kind of change things to suit you, huh?

AND THE WINNER IS – ADAM TRELOAR

People at Collingwood must hate this bloke, huh?

Has the best average in the league in terms of disposals for the season and he is the one they choose to move on? Not Steele Sidebottom, who was caught “half naked” wandering the streets of Williamstown. Not Jordan de Goey, who is out of contract and has a “hiccup” he has to deal with…

Nup, let’s get rid of the bloke who runs his guts out for the team every week.

Treloar has had his critics over the years in regard to his disposal, but he is a relentless worker and leaves nothing on the table. Without an All-Australian accolade in his career, he is just about the most underrated and undervalued player in the game.

Hope this little bit of recognition finds its way to him.

And yes, I was very tempted to award it to out wingman of the year, Sam Menegola – absolutely robbed of an AA nod in 2020.

AND THE WINNER IS… A TIE

Yeah, I wussed out and didn’t want to split the two.

You know, there are those who STILL doubt the influence of Nic Naitanui on the game of Australian Rules Football.

I’m gathering they missed this fixture against the Saints.

Matched up against the two-headed monster of Marshall and Ryder, Nic Nat took the game over in the last quarter, repelling a spirited St Kilda and putting his side on his back in the process. Not only was his ruckwork absolutely superb, he also added the following stats in the last quarter alone.

He was a force of nature. Some rucks would take those stats for an entire game, but in a contest pitting two legitimate final contenders at the time, Naitanui was immense

Another last quarter virtuoso performance saw Toby Nankervis permitted to head into defence without an opponent, and boy, did Port Adelaide pay for the mistake of not having Scott Lycett go with him.

Nank was a tower of strength in defence, consistently repelling the repeated forward entries from Port.

Not only did the big man do the aerial work, he also led the game in tackles as he applied the pressure at ground level.

He was a game-winner and a game saver for the Tigers in one of the biggest and best games of the season and thoroughly deserves this award.

The way we’re going, this might end up being called ‘The Dusties’ instead of The Swannies at some stage.

People have lamented the fact that Dustin Martin can be wasteful with the footy at times, but he had two of the top seven games of the season for inside 50s, with both coming at the pointy end of the season. I’m sure I am preaching to the choir, but the bloke is a freak.

When Martin gets the ball, you can almost guarantee that he is looking to find someone inside 50. If that means he thumps it 60 to get it there, or lowers the eyes and hits a target, it matters not. He is a weapon unlike any other and the closer the season gets to ending, the better this fella gets.

AND THE WINNER IS – DUSTIN ‘GODDAMN’ MARTIN (RICHMOND)

Last year I decided to name this award after Dustin Martin. He’d just won his second Norm Smith and collected his second Gary Ayres Medal in the process, cementing him as an all-time great.

Of course, he then came out and topped it with a withering four-goal blast in the 2020 Grand Final to not only change the momentum of the game, but secure an unprecedented third Norm Smith Medal.

If those people could now stop doing that, that’d be great. There is no comparison.

Dustin Martin stood up when it counted yet again this season. He dropped the hammer on Geelong and left nobody contemplating just which of the superstars on display that day had it in the tank when it counted. His game-changing goal in the second quarter and relentless attack following it drove the Tigers to an historic third flag in four years and with an accomplishment no one else has been able to achieve, Dustin Martin now finds himself in a position where being discussed as one of the best players in the league is no longer a matter of debate.

And he is perilously close to having his name firmly entrenched in the discussion about the best to have played the game.

The scary thing is… he may not be quite finished just yet.

Martin has now secured back-to-back awards in the last two categories… the latter of which was named after him, anyway. Bloody remarkable player…

And there we go; the second annual edition of ‘The Swannies.

Hopefully it is taken in the tone it is intended, but you just can never tell with some people… they get so fired up over something so small…much like many of Joe Ganino’s romantic partners.

Thanks to everyone who has jumped on as a member and decided to support us. Your help enables us to produce better content and more of it. 2021 will be a big year for The Mongrel, and we hope to give you more than your money’s worth as members. Hit the link below if you’d like to join.