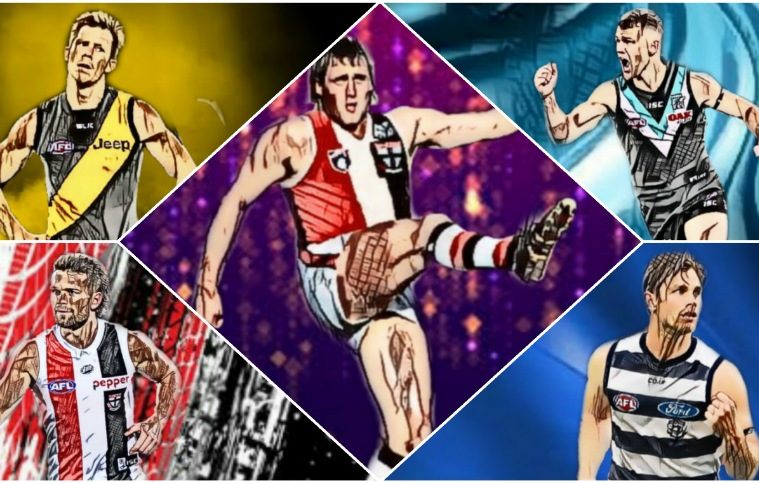 Here at The Mongrel we have a flair for the extravagant. We like to watch football with personality, and none in the AFL have more personality than those who kick the big bags. Let’s face it – we love to see a dominant mid rip the game apart, or a defender completely own the back 50, but there is something about a player getting on the end of a few long balls, and slotting a bag of goals… it’s what you pay to watch the footy to see.

But there is already an award for the big goal kickers, right? It’s the Coleman Medal and as we’ve seen in recent years, only the big blokes can win it. Tom Hawkins secured the award this time around, making it safe with 11 goals in two weeks over Rounds 11-12, but here at The Mongrel, we want to dive deeper into the art of forward craft to look at more than just one award to cover everything.

Hmmmm, slightly sexual, so not quite there yet.

Well, it’s not quite the Oscars, and it’s better than the Logies, so it’ll do for right now. Hell, it worked last year – let’s do it again this season!

Before going any further, these are arbitrary decisions. having watched every game of the season, I feel well placed to make decisions based on what I saw… and I am also in a position to question my life choices. This is not the be-all and end-all of anything – it’s a bit of fun. Relax, and enjoy.

So, without further ado, the Pluggies for 2020…

JOSH KENNEDY kicks 7.0 against the Pies in Round Eight

TOM HAWKINS kicks 6.2 against Port Adelaide in Round 12

CHARLIE DIXON kicks 6.2 against West Coast in Round Four.

JORDAN DE GOEY kicks 5.1 against Geelong in Round Seven

AND THE WINNER IS… TOM HAWKINS

Really hard to go past Hawkins here. Not only did he completely monster Tom Clurey, leading to a huge win over league-leading Port Adelaide, but he did it in such a dominant fashion that it had commentators comparing him to Tony Lockett.

I shit you not.

Hawkins had 12 score involvements, seven contested marks and nine marks inside fifty as he absolutely owned the forward half.

Many were critical of Ken Hinkley leaving Clurey alone on Hawkins, but the way the Coleman Medallist was playing that day, even a double team may not have been enough to slow him down.

BRODY MIHOCEK for his two huge last quarter goals against West Coast in the Elimination Final.

AND THE WINNER IS… ROBBIE GRAY

Yeah, Newnes’ goal was great and I loved how casual he was about it, but he is no Robbie Gray.

Newnes’ shot was a hope for the Blues – I expected Gray to kick the goal to sink Carlton. That’s pressure.

In a kick as impressive as any you’ll see, Gray took the responsibility, went back and broke the hearts of the Carlton fans with the kind of deadly accuracy Port Adelaide fans have come to expect from their superstar for years.

Whilst I am sure plenty will prefer Newnes’ efforts, seeing Gray go back, take the deep breath and do what he does best made me smile. He is one of the modern-day greats.

ERIC HIPWOOD kicks 5.1 in a win against the Western Bulldogs in Round 11

AARON NAUGHTON kicks 6.1 against Adelaide in Round 12

GRYAN MIERS snags 4.0 against North Melbourne in Round 10

AND THE WINNER IS… AARON NAUGHTON

I’m going with Naughton here not based on the fact that he kicked the six goals, but on the fact he played on a veteran, dual All-Australian defender in Daniel Talia, beating him both on the lead and in body-to-body clashes as well.

Naughton has long been looked at as the future of the Western Bulldogs’ forward line and it seems as though only injury will be able to hold him back as time ticks by. Already possessing a game with nine contested marks to his name (one off the record set by the great Wayne Carey), Naughton burst to life in the Elimination Final, almost willing his team over the line with four big contested grabs late in the game as the Dogs drew closer and closer to the Saints.

The Bulldogs forward needs an injury-free run of footy and when he gets it, might end up being the best Under 23 forward in the game for a couple of seasons yet.

AND THE WINNER IS… JACK RIEWOLDT

Firstly, we were told that he was horribly out of form. Remember that?

Then people realised that he was more often than not playing the decoy role to open up space for Tom Lynch. Remember that?

THEN… he finishes the season with more bloody goals than the bloke he supporting.

And then, people questioned whether he should keep playing!!! Far out, the bloke cannot win!

Riewoldt may not be the most impressive of the current crop of forwards – not anymore, but with two bags of four this season, he definitely held up his end of the bargain for the Tigers. If we’re including finals, Riewoldt finished the season fourth overall in goals scored.

Not bad for a decoy.

Liam Ryan desperately unlucky not to get the gong here – as the third option up forward, his season was outstanding.

AND THE WINNER IS… DAN BUTLER

There will be some who dispute this decision and state that Liam Ryan’s season was superior – I’m willing to cop that, as it was line-ball between these two as far as I am concerned. Ryan came home like a train and Butler started like a bullet.

I decided to go with Butler in the end due to the impact he had on his new team right from the outset. Butler was electrifying, hitting the packs hard and manufacturing opportunities that left Tiger fans scratching their heads and wondering why they’d let him go.

Bringing a touch of Richmond pressure to the St Kilda forward line, Butler was supposed to be one of the “lesser” St Kilda recruits of 2020. Turns out he was anything but, setting the tone for the saints’ season with 18 tackles in the first three games and a nine game stretch where he averaged 2.33 goals per game.

Robbed of an AA spot so that Dangerfield and Dusty could slot into the forward line, we’ll do Dan a little bit of justice here and give him this award.

THE JOE GANINO “COULDN’T HIT THE OCEAN FROM THE BEACH” AWARD – Worst accuracy in front of goal.

HUGH MCCLUGGAGE  kicked 8.21 for the season

TOM PAPLEY kicked 26.27 for the season

BAYLEY FRITSCH kicked 22.24 for the season

DAYNE ZORKO kicked 9.15 for the season

AND THE WINNER IS… HUGH MCCLUGGAGE

Nobody comes close to him this year.

McCluggage missed from the boundary, from 20 metres out, from ten metres out… he missed from everywhere! Even the most important goal of the year from him looked as though it may have been touched!

Clug’s year was good – not spectacular, but pretty solid and the one thing that may have elevated it to another level was hitting the scoreboard. In a team that desperately needed someone to slot a few and steady the ship in games, McCluggage turned out to be the worst of all.

HARRY MCKAY kicks 4.1 in a loss against Adelaide in Round 17

JACK MARTIN snags 4.1 in the season opener against Richmond

TOM PAPLEY kicks 4.2 against the Dogs in Round Four

ANTHONY MCDONALD-TIPUNGWUTI kicks 4.0 against the Eagles in Round 15

AND THE WINNER IS… JACK MARTIN

The game between the Tigers and Blues seemed all over, with Richmond holding a commanding 46 point half time lead.

But Jack Martin wasn’t having any of it.

In his first game as a Blue, Martin exploded in the third quarter, slotting all four of his goals in an inspired third quarter to bring the Blues back to within a couple of kicks before Richmond steadied.

Though he didn’t hit those heights again (kicking four in a quarter isn’t easy), Martin gave Carlton fans a lot of hope for the future. On a long-term deal, they’re hoping to see a lot more from him in 2021.

AND THE WINNER IS – JAKE STRINGER

I might cop a bit of flak for this from Bomber fans, but hear me out – there is a solid reasoning behind it.

There is no doubt that Stringer’s best is exceptional. He is masterful in creating opportunities for himself and when fit, can hit the scoreboard in a hurry. The first part of the season saw Stringer look lethal in front of goals. He had ten goals to his name after four games of footy in 2020 before getting injured, and added three behinds to that mix as well.

So, that’s 13 scoring shots over the first four games, right?

He had only 14 score involvements in total in that period. So, if he wasn’t doing something to get himself a shot at goal, he wasn’t really doing much of anything. Minimal output for maximum results? Maybe… or maybe he just wasn’t doing enough for others?

AND THE WINNER IS…  DUSTIN MARTIN

Who else, right? I mean, he’s an All-Australian forward pocket… get off my back!

That’s not hyperbole. That is now a matter of fact. Three Norm Smith medals and a string of best on ground performances in finals means that Dusty’s greatness will only be denied by those with their heads planted deep in the sand.

And there we go; the second annual edition of ‘The Pluggies’.

Hopefully, it is taken in the tone it is intended, but you just can never tell with some people… they get so fired up.