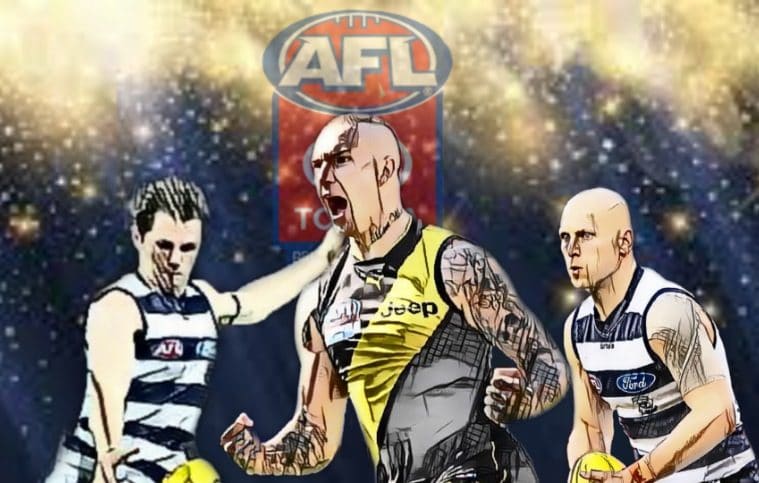 The Dream, The Fairy Tale… And The Harsh Reality

Over the coming few days, expect an avalanche of stories around the dreams and fairy tales associated with playing in the AFL Grand Final.

These flights of fancy will revolve around Patrick Dangerfield finally making the big one after years of falling painfully short. The 2016 Brownlow Medallist is regarded as one of the best players ever to play the game, but when people point to deficiencies in both his game and career, the focus narrows onto two things – his errant kicking and the lack of a premiership medallion.

The dream realised would see him rectify the latter this coming Saturday.

Gary Ablett is the fairy tale story of 2020. After a questionable move to become a Gold Coast Suns player, resulting in multiple club championships, a second Brownlow Medal, a swag of All-Australian selections and zero finals appearances, the man regarded as the greatest midfielder in the modern era has the chance to cap his return to where it all began with a Geelong premiership.

The fairy tale ending would have Gaz’s  name announced following his last game as he walks up to receive his premiership medallion.

These are feel good stories – I feel good just writing them down. They are dream scenarios for players we have watched and admired for years. They are stories we can all relate to and actually share in. Dangerfield’s journey to the top has been arduous, but here he is – one step away from an exclamation point on his wonderful career. Ablett’s story has been one of the prodigal son returning home and helping his team back to the Promised Land.

The stuff people write books about.

However, the problem with dreams and fairy tales is that they are reserved for those with stars in their eyes and their heads in the clouds.

In the AFL, it is the harsh reality that often takes dreams, takes fairy tales and takes storybook endings and crushes them right before your eyes. As the footy world waits to see what Danger and Gaz can produce, the reality of the situation is that there is another whose hopes and dreams lie strictly in the realms of reality.

This man has taken all before him. He has risen to the occasion on the biggest stage in football, not once, but twice. He has stood on the mountain and looked down at those ascending, dismissing them as they near the summit and sending them plummeting back to the valley of also-rans with a fend off and a sneer.

Whilst others have dreamt of what may occur on the biggest day in football, Dustin Martin has taken those dreams and turned them into nightmares. He is the dream crusher – the dreamer’s nightmare.

Remember the hopes of the Adelaide Crows? Remember the journey they were on? They were the favourites going into the Grand Final in 2017 until Dustin Martin tore them to shreds en route to the first Norm Smith Medal of his career.

And then there was the “fairy tale” run of the GWS Giants just over 12 months ago, as they clawed their way into the last game of the year to attempt to wrest the title away from the Tigers.

That did not end well, with Martin once again reigning supreme as the best player on the park, and his Tigers mauling the pretenders to their throne. Dusty picked up Norm Smith number two along the way, inking his name into the record books as one of the greatest big-game performers of all time in the process.

And he would be eyeing the chance to do it for a third time. This time, at the expense of Geelong and their dreams.

We are days away the clash that will see the Cats, coming off an impressive win over the Brisbane Lions, and holding a 5-0 record at the Gabba this season, take on the Tigers. All we’ve heard over the past 48 hours is the talk of the potential match-up between Dangerfield and Martin and how it may play out.

It was the 2019 Preliminary Final, to be exact, and whilst Danger had a very solid first half, with 19 touches to his name, when the Tigers put the foot down in the third quarter, he was nowhere to be seen. I’m sure he hoped to have an impact. I am sure it was his dream to stand up under the intense Richmond pressure.

But the reality of the situation conjured a very different outcome – one that Dangerfield would be desperate to rectify. He added just two touches in the third term as the Tigers tightened the screws on the Cats. He let his team down. When Geelong needed someone to stand up, he went missing.

In that third quarter, the Tigers went from a 21-point deficit to a five-point lead. They were never headed from that point on. The Geelong dream ended that evening, hurled on the growing pile along with the dreams of the Crows, the Lions, and soon enough, the Giants. And doing the damage again was Dustin Martin.

With 2.2 from 22 touches against the Cats despite an injured thigh, Martin’s nine score involvements were a dagger to the heart of the Geelong team. It was Dusty slamming home a goal with just four minutes elapsed in the third quarter, dragging the Tigers back to within eight points. With goals to Lynch and Castagna following, the Tigers surged to the lead.

He is the sand in the Vaseline of the football world. He is the itch that starts the rash, the cough that starts the plague, and he is the obstacle standing in the way of Dangerfield and Ablett realising their dreams.

Hopes and dreams can be wonderful. They give you something to look forward to and hold onto. They fill you with an expectation that maybe… just maybe everything will be okay.

Mike Tyson famously said that everyone has a plan until they’re punched in the face. That is what this Richmond team provide in finals. Geelong will come in with a game plan. Of course they will, but how does that plan fare when the dominant Tiger wearing the number four guernsey puts one on their chin?

The is the reality this Geelong team is forced to face as they stand across from Dustin Martin and his Tigers with the national anthem ringing out around the Gabba. That reality is that they face a team who does not have to hope and dream about what could be and what might be. They are a team of realists that know their destiny is in their own hands.

They’ve been there, they’ve done that and they have reaped the rewards.

They are the reality that ends the fairy tales.

Richmond will take no prisoners. They never do. They stand on the precipice of cementing a dynasty. Are dreams, hopes and fairy tales enough to stop the team that has their feet firmly planted on the ground, prepared for battle?

Geelong, Dangerfield and Ablett will need to deal Richmond and Dustin Martin a healthy dose of their own reality if they are to raise the cup and that is done by matching the Tigers’ intensity, not having any lapses and not hesitating to sit a Richmond player or three on their backsides. Can they do what they failed to do in 2019? Can they overcome the finals specialist and his team? Can they match the Tigers? Can they overcome them?

They carry the hopes and dreams of Geelong supporters everywhere. And with a heap of their stars on the wrong side of 30, it could be this group’s last chance to turn them into a reality.

For those jumping over from the Richmond Tigers Tragics FB group, hit up your man, Clint Brooker in the group and comment away to win a free annual Mongrel membership.