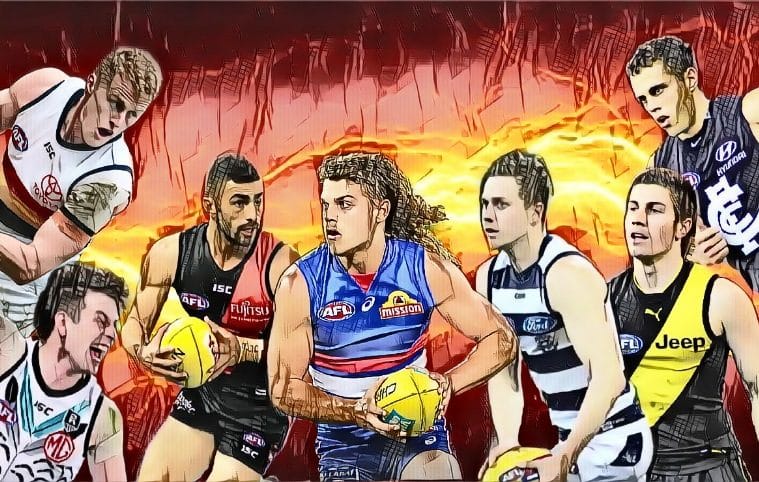 So, as we’re busy celebrating the achievements of the best players in the league this season, I want to take some time to pay some attention to a few of the blokes who had excellent seasons, but for some reason, were not given consideration as All-Australians.

We have already created our All-Australian B-team, located below for your perusal, but what about the players who couldn’t even get a look in as part of that team? Would you call them underrated, or just plain unlucky?

But the team is not!

There’ll be no All-Australians in this team. How can they be underrated? That means no more Brad Sheppard in these teams… ever! No Brownlow winners, Coaches’ Association Players of the Year or MVP winners… those blokes aren’t underrated. So, No Cripps, no Fyfe, no Gray… despite them not making the All-Australian, or our own B-Team this season.

So, without further ado, the Mongrel Punt All-Underrated Team of 2020.

I opted for Dougal Howard here – never an All-Australian, he took on the big jobs this season and established himself as the Saints’ number one defender in his first season in red, white and black.

Sam Collins had a great season in defence for the Suns and won himself a legion of fans with the way he goes about it. Hard, tough and strong in the contest, he is a hard man to move off the spot.

And Liam Baker – might be my favourite Tiger. Tenacious, relentless and on his day, has the capacity to be the best player on the park… a common theme across the back six at Richmond.

Want-away defender, Adam Saad was excellent for the Bombers, standing up under a wave of incoming footy at times in 2020. His imminent departure is obviously leaving a bitter taste in the mouths of the Bomber fans, but his 2020 season was his best to date.

Liam Jones did a mountain of heavy lifting for the Blues, and allowed Jacob Weitering (AA B-team) to have some freedom to impact contests by taking the best forward in many games. Ended up leading the league in one percenters – a huge year from a bloke you hear very little about.

Liam Duggan had a breakout year for the Eagles, moving from half back up through the middle when they needed a bit of grunt. Was it the mullet? Duggan played above his height, intercepting well and constantly took the game on. A highlight for West Coast in a middling season.

Hunter made a huge difference in his return to the Western Bulldogs, and you have to wonder what sort of season he could have compiled if not for his two absences. His 25.3 touches per game had him in the top ten in the league, and he was second overall in score involvements per game. Pencil him in for AA in 2021 if he plays the whole season.

Some people deride Adam Treloar for his disposal. Whilst there is no question he has room to improve in that department, his ability to win the footy is close to the best in the league. Never an AA, a slight increase in his ability to hit targets inside 50 would see him vault into AA contention in 2021 pretty quickly

A bit of smoke and mirrors from Hugh McCluggage this season – good without being great, he managed to convince some he should have been All-Australian. But with a return of 8.21 in front of goal, he can slot into this team instead.

Two power representatives on this line, for very different reasons. Butters is in here for his game-changing play. Little taps to advantage, bodywork that creates opportunities for his teammates – Butters does the little things that create big things.

Brad Ebert makes it on the back of hard work. I love the sacrifice he has made for his team; becoming a half forward when midfield was his preferred position and embracing the role. Great overhead, tackles well and slots the occasional goal. You underrate him at your own peril in the finals.

Harry McKay has the potential to be the best contested mark in the game. With hands like a vice, he comes out of contract next season and will be dipping heavily into any coin the Blues have saved. If he could kick straight, he’d be worth even more!

Playing undersized forward, Bayley Fritsch is fantastic in the air and led the Dees in goals this season, finishing with 16 goals for the season. I imagine he’d be kicking a lot more if the Dees had anyone who kicked well inside 50.

More of a half forward than a full forward, Mihocek’s no-nonsense style will likely see him gain a hefty pay rise in 2021. with Jordan de Goey possibly looking at other otions, the hope is Mihocek stays with the Pies.

And Mitch Wallis was able to conjure some miracles this season, playing one-out in the goal square at points and winning contests he had no right to win. Finished with 18 goals for the year and should have had 20+ but went off multiple times after taking a mark or winning a free kick due to some bleeding.

Huge year for ROB, and I reckon there’d be a few people who mocked him a season or two ago now lamenting their choices. Mark Ricciuto alluded to it during one broadcast that there were people absolutely convinced O’Brien was not up to AFL standard. Suffice to say, he has proven them wrong.

I love Ed Curnow. Ask him to do a job and it gets done – he is like the dream employee. Can play a lockdown role and still win his own footy and when you watch him play you can just tell he hates losing a contest. Absolutely hates it.

So, if I told you that Bailey Smith got more of the footy in 2020 than Marcus Bontempelli, would you call me a liar? Well, I am a liar, but not on this occasion. With 21.2 touches per game, Smith continued his improvement and is looking like the next legitimate Dogs star.

Crisp really stood up for the Pies in the back half of the season, and even in their capitulation to the Cats, was one of the few on his team that could hold his head high.

Mitch Duncan switched from his role on the wing to more of a permanent midfield role this season, and this positional move really aided the Cats in covering the loss of Tim Kelly.

The only player to ever achieve the defensive triple-double (double figures in one percenters, rebound 50s and intercepts in the same game), Tarrant tried desperately to hold the North defence together in 2020, at times inundated by attacking 50 entries. Up against it, he finished second in the league in rebound fifties per game this year. I find it amazing he’s never been an All-Australian.

Finally, with Caleb Daniel (AA Team) getting mist of the kudos, the intercepting and rebounding of Bailey Williams off half back for the Dogs was a real positive to take out of the season.

So, there we go – who’d I miss? Keep in mind that superstars can’t make this team – multiple AA selections, Brownlow or MVP winners… they’re simply not underrated in any way, shape or form.

But they can be overrated.

Look for The Mongrel’s All-Disappointment Team coming in the next couple of weeks – sure to annoy some of you.