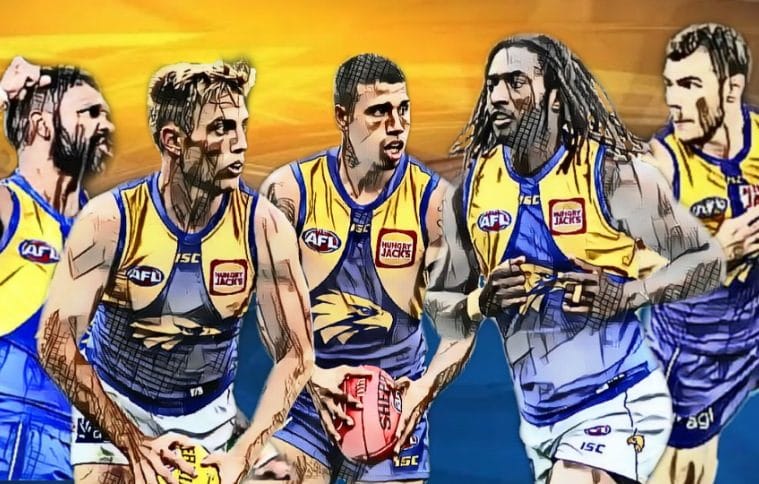 After a horror start to the season, West Coast righted the ship to win 11 of their last 13 games and ended up just outside the top four in controversial circumstances, when grainy video footage was once again insufficient to determine whether or not a shot at goal by Marcus Bontempelli was touched on the line.

The inconclusive evidence saw the Dogs claim four points and cost the Eagles a shot at the top four.

To add insult to injury, or in this case injury to insult, most of their premium talent succumbed to injury at some point in the latter half of the season – Elliot Yeo, Luke Shuey, Jack Redden, Dom Sheed, Jeremy McGovern and Josh Kennedy have all spent some time on the injury list. However, despite their misfortunates, West Coast still showed a fair amount of grit and have managed to win dirty, even though some commentators like Matthew Lloyd have “put a line through them” due to not being damaging in the greasy Queensland conditions.

Winning the flag from outside the top four is a tall order for any side, particularly in the challenging year we find ourselves in. But to put a line through West Coast’s chances to add their second piece of silverware in three years is premature. I think they may surprise people by doing some damage when October rolls around.

There are two reasons people are not predicting they’ll be a contender in this finals series – the first of which is injuries. They’ve had an awful run with outs to close out the season and at one point during the fixture squeeze of five games in 19 days, struggled to fill their midfield, relying on a handful of young players, all of which had less than ten games to their name

West Coast haven’t had an injury crisis like that in recent memory, so it’s fair to say that confidence in them sunk to a new low. However, at the worst point of their crisis, they were able to beat sixth-placed Saints in a gruelling Round 17 encounter, demonstrating that, even when the numbers were against them, they were able to overcome adversity.

Recently, the club has stated that Yeo is out for the season with osteitis pubis, which is a devastating blow. However, they have had some luck with their other stars, with Shuey, Redden, Hutchings, Jetta, Kennedy, McGovern and Cripps (personal) all scheduled to be available for their first final against Collingwood.

It’s no surprise that chaos-ball sides like Richmond are benefiting from the slippery conditions this year. Even without COVID, Richmond would be a strong contender, but adding the dew factor into the equation helps facilitate a game plan that relies on pressure and moving the ball forward at all costs.

This is the kryptonite for West Coast, who prefer to move the ball cleanly by foot in a kick-mark style that has been a hallmark of their game for the past few seasons.

A lot of pundits have put down West Coast’s Queensland woes down to the conditions, and while I do believe this is a factor in some wayward performances, I think there are a few more things at play.

The reset saw a very uncharacteristic Eagles side drop three in a row. They looked lethargic and disinterested and were labelled ‘whingers’ by the media, who assumed their lacklustre performance was due to having to settle into the Queensland hub. There’s no denying that they had a rough time and were probably glad to get back home to their real beds, however, I think there is a little more to the story than that.

Adjusting a game style from 20 minutes down to 16 minutes is not easy. Sides, like West Coast, Richmond and Geelong like to wear down opposition in a grind. To a degree, all suffered early in the season trying to find their feet, while younger teams like Gold Coast used their speed and early season enthusiasm to put teams to the sword.

It wasn’t until Round Five against Sydney that we saw a West Coast side play a more direct and aggressive style to compensate for shorter quarters and this is when they started to rouse from their slumber.

It’s amazing that they have only lost two games since then. One loss came against the reigning premiers on a four-day break and the other against-finals bound Dogs by two points. Perhaps someone should have let Matthew Lloyd know before he tried to grab a headline.

WHERE DOES THE IMPROVEMENT COME FROM?

If they hope to raise the silverware, there needs to be a significant improvement in their engine room – in particular their inside fifty delivery, which has been hit and miss all season. When you have a forward line consisting of names Kennedy, Darling and Ryan, you should be a lot more damaging. West Coast’s patches of scoring droughts have come mainly from rushed kicks inside the forward 50. The fact they were able to win close games despite this is a testament to their forwards, who have been extremely accurate.

Fortunately, there is a high ceiling with their returning midfielders and that has been bolstered by the inclusion of Tim Kelly, who is still adjusting to a system that is very different to the Cats. The talent is all there, and Adam Simpson will be hoping that despite how many games have been missed in this area, that somehow it will all gel over the next month.

WHAT ARE THEIR CHANCES?

For the past three years, the road premiership has gone through Richmond. In order to win it, that’s has been the team to beat and it will be again in 2020. West Coast might have been fortunate that Collingwood knocked them off in 2018 and they didn’t have to face them in the big dance – we will never know, unfortunately, as it would have been a cracker!

Outside of Richmond as clear flag favourites, I like the look of West Coast over other seeded teams, even though they are going to miss out on a valuable double chance. And while you can argue against them with a range of stats, ranging from contested possession to ground ball gets, there’s no denying they have a wealth of big game players who can rip games apart. Luke Shuey, Jeremy McGovern, Nic Nat, Tim Kelly and Liam Ryan. These aren’t just All Australian calibre – these are players that can be a significant influence in any game. God help the opposition if they put it all together in the same game.

You only have to go back to round 18 and witness the games of Nic Nat and Kelly to understand the impact they have. By all accounts, St Kilda should have taken the lead and never looked back in that fourth quarter, but these two players showed that individuals can win games. If they replicate that sort of performance come finals, you don’t want to be the team lining up against them.

On the odd-chance they somehow have a quiet day out, there are plenty more ready to pop up and have a blinder. This is a team that has balance, and it has role players that can contend for best on ground honours. We’ve seen Brad Sheppard finally rewarded with an All-Australian berth, Dom Sheed slot goals under immense pressure and Luke Shuey put the team on his back when they needed someone to stand up. And then there are players like Liam Duggan, Oscar Allen and Tom Barrass, all of who are more than capable of being game-breakers in their respective roles.

And where the Eagles set themselves apart here is overlooked a little too often – they just don’t have the personnel – they have the finals experience. This is something lacking in the equally impressive Lions and Port teams – two grand finals, one elimination and two semis in the last five years. They know how to win big games.

To have any hope of winning, they must avoid any more significant injuries and get lucky with the fixturing. If they get up against Collingwood, they’ll face the loser of Port and Geelong. Even though Port might be a tougher assignment, it might work out better for them to play them at Adelaide Oval, because a) they won’t need to quarantine and can fly back home for another week and b) they have never lost to Port there before and will go in with a bit of confidence. Then will come their biggest hurdle – the prelim, where they will undoubtedly face Richmond, unless Lions can do the unlikely and win the qualifying final.

The prelims will probably be both night games this year and although they have the capacity to beat Richmond, it’s very hard to see it happening when the conditions are a little dewy. That said, West Coast are training with an oily, soaked ball to replicate Queensland conditions, so who knows – perhaps they will overcome their greatest weakness.

But whether is not their only short-coming. Sluggish starts, fades in focus, allowing teams to negate their system with pressure acts – all of these have featured in the Eagles’ 2020 campaign. All of these will have to be addressed.

Considering their rough start, West Coast have done remarkably well to get back on track and, even though they would be disappointed in not seeding in the top four, they still have a chance at another flag. I don’t buy the ‘put the line through them’ mentality that is circulating – they are too good of a team to completely write off. On their day, West Coast is as good as any team in this finals series and is capable of topping all the teams at the top of the ladder. That’s why I think they’re the dark horse this final series. It takes a month of good footy to win the flag, and West Coast are capable of producing it.

However, the Queensland factor might be too much of a hurdle for them to clear and they may not realise their full potential.

I think they’ll beat the troubled Pies on Saturday and should give Port/Geelong a good crack too. I can’t get my head around them beating Richmond in an evening preliminary, and that’s where I predict West Coast will end their season.