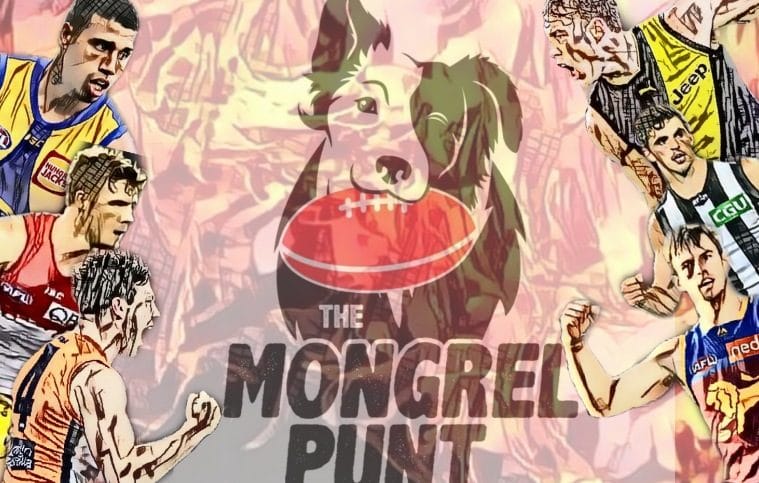 All year, The Mongrel has been compiling a list of the top fifty players in the league. And now… to channel Frank Sinatra, the end is near…

Well, it’s not “near”. For some, the end of 2020 has already sent them into exit interviews, free agency, or in some cases, a different career. As some players prepare for finals, we’ve been busy(ish) preparing our year-end top 50 players of the season.

You may be familiar with the concept of The Mongrel 50, but just in case you’re not, I’ll give a brief rundown.

Every round, we compile a ranking based on stats and votes pertinent to a player’s role. For instance, defenders are assessed on spoils/one-percenters, intercepts, metres gained and disposal efficiency as well as several more. A player has to hit a certain number in each category to register points. The player who does that most often will obviously rate higher.

It’s the same for mids, forwards and rucks – all assessed on criteria pertinent to their actual positions. It’s no use trying to award a forward points for rebound 50s, or a defender for tackles inside 50. So, we disregard the stats that don’t matter to a position and concentrate on those that do.

We then add the coaches’ votes and our own Mongrel votes to the mix as well as a small bonus for any player who scores points on a winning team – after all, winning games of footy is what it’s all about.

And what we end up with is a mix of all positions, and the Mongrel Punt’s top fifty players of the season. My vision with this was to be able to have a list representative of the best players on the best team.

Let’s jump in with the first ten players in our countdown.

A solid season for Lynch saw him well and truly assume the position of the number one forward target inside the Tigers’ forward fifty… as if there were any doubt.

He ranked sixth in goals kicked, sixth in marks inside fifty and tenth in contested grabs.

Despite averaging career-low numbers in disposals and marks, Lynch was able to stand up at vital times in games, and was a tower of strength in inside fifty marking contests.

I have a feeling he will play a huge role over the next five or so weeks.

Was a surprise selection in the All-Australian team after establishing himself as the Cats’ best two-way midfielder in 2020.

Relishing the relative freedom in the midfield after the departure of Tim Kelly, Guthrie took to the role with determination and there is a definite argument that he was the Cats’ best midfielder of the season – yes, including Dangerfield.

He ranked 11th in the league in effective disposals and 16th in overall touches, with 22 per game – not quite at his career-best, but in a year with shortened game-time, Guthrie was able to improve on his 2019 figures, +3.6 in disposals for the year.

Some of his defensive work earlier in the season was excellent, with his shut down of Jack Billings being one that leaps immediately to mind. Who he plays on in games against Port and Richmond in coming weeks will be enthralling to watch.

An injury-interrupted run had an impact on his position here, and really, with just 13 games to his name, it’s quite an achievement making the 50 at all.

Started the season brilliantly, averaging 17 touches and two goals per game through his first seven outings, but his susceptibility to injury must be a source of concern for GWS – as if they didn’t have enough to be concerned about.

Over the past four seasons, Greene has missed way too many games, and despite his obvious impact, really needs to put together a full season of consistent football.

His impact on games and ability to single-handedly turn the tide was evidenced with his Round Four performance against Collingwood. Matched up against Brayden Maynard, Greene won several vital one-on-one contests that even saw his direct opponent applaud after one of his efforts to take a contested grab,

I thought this may be the year Greene went from infamy to being one of the true superstars of the competition, and whilst he is close, injury may have prevented him taking that step again.

It really seems like he’s been around forever, doesn’t it? At just 27, Parker has a heap of good footy left in him and he compiled another quality season for the Swans as they battled through an injury-impacted season.

Missing Josh Kennedy for large parts of the year, and with both Lance Franklin and Isaac Heeney missing, the Swans were lacking star  power, but still managed to take the game up to some of their more fancied opponents.

Parker has been a warrior for the Swans, and with some young talent really starting to shine, he may be a part of the next successful era in Sydney as well.

The understudy to Lachie Neale in 2020, Lyons has elevated his game in 2020 to not only play the secondary midfield role, but to take over games at points for Brisbane.

When Neale has been tagged, it has been Lyons putting the midfield on his back and carrying them.

He ranked tenth in total inside fifties, fifth in overall score involvements, second in total stoppage clearances and ninth in total contested possessions as he powered the in-and-under work for his team.

A picture of consistency, Lyons topped 20+ disposals in 14 of the 17 games in 2020, more than holding up his end of the bargain as the second midfield option. Also impressive were his clearance numbers, with 6+ clearances on six occasions in 2020.

Lyons was a bargain pickup for Brisbane and he is proving to be a valuable asset. He will need to be at his best as Brisbane push for a better finals run than they experienced in 2019.

With just 13 games to his name, Pendles’ performance when he was on the park has been spectacular again in 2020 as he became the Collingwood games record hoder and also the longest serving captain of the Pies.

Pendlebury is closing in on a number of statistical record and will undoubtedly top several all-time stat categories by the time all is said and done.

He ranked sixth for inside fifty deliveries per game, tenth in disposals per game and 12th for effective disposals per game as he continually employed that special ability to make time stand still when he has the ball in hand, allowing him to make the correct decision with the footy.

Before an injury kept him out of the team for four weeks, Pendles was averaging over 25 touches per game and was on track for yet another Copeland Trophy. As it stands, he probably will not win it this season, but there is no doubting the influence he has on a game. he passes the eye-test every single week.

Missed All-Australian selection, which raised the ire of many Tiger fans, but there is no doubting the standard at which Nick Vlastuin controls the half back line for Richmond – it is elite.

Whether locking down his own opponent, or drifting over to help a teammate, Vlastuin’s importance to the tight Richmond defence cannot be overstated.

Ranked third overall in total intercepts, Vlastuin is tough, uncompromising and fearless when it is his turn to stand under the footy and wait for contact.

With 7+ intercept possessions on nine occasions, Vlastuin is a weapon that teams cannot quite work out. Against the Kangaroos, Rhyce Shaw sent Jasper Pittard to play as a defensive forward on him – the result wasn’t pretty, with Vlastuin notching the lazy 11 intercepts for the day. Where the hell was Pittard?

Of those nine occasions where Vlastuin notched 7+ intercepts, he notched double-figures five times. If this were cricket, you wouldn’t want Vlastuin to hit 50 – a century would more than likely follow.

An interesting one – I fully expected Kelly to take a while finding his feet in the West Coast system, and with Yeo, Shuey and Sheed in the mix, I didn’t think he actually needed to do in blue and gold that which he did in the hoops at Geelong. In Geelong, it was more or less him and Dangerfield controlling the midfield.

At West Coast, the dynamic was much more diverse.

A relatively sedate start saw him fail to hit 20 touches in four of his first five games, but as soldiers started falling, Kelly lifted his game. he had 20+ in four of the next five games and lifted his workrate at clearances as well.

He finished the season ranked eighth in total inside fifty deliveries and third in total goal assists, demonstrating his class with the ball in hand in the forward half.

Kelly now faces the challenge of being the main man in the West Coast midfield in finals, with Elliot Yeo ruled out and Luke Shuey working back from dual hamstring injuries. TK will need to turn it on and channel some of the 2019 form for the Eagles to make some noise in the finals.

Putting it out there – he is the most underrated big defender in the league. Perhaps only equalled by Liam Jones at Carlton in that regard.

He finished second overall in one-percenters (spoils) in 2020, playing the role as deepest defender, and having to carry much of the load with Jeremy McGovern struggling to stay on the park.

Barrass’ game against St Kilda, once McGovern went down injured, was a defensive masterpiece. Notching the rare defensive double-double, Barrass had 16 one percenters to go with his 11 intercepts as he stepped up to the plate and ensured this Eagles defence was going to remain impenetrable. He added six rebound fifty disposals in that game to round out one of he better games of a defender for the season.

Barrass looked like a man who wasn’t enjoying his footy in 2019, but this season he has turned the corner, and at 24 years old, is coming into the peak of his powers.

The second-best wingman of the season, in my book (sorry – nobody was close to Sam Menegola for impact this season).

Gaff jumped out of the box in 2020, arguably the Eagles’ best performer through the rocky first month of the season. In the first four games of the year, he averaged a huge 29 touches per game before drawing a little too much attention to himself and drawing a tag in the following rounds.

Gaff found himself the target of plenty of defensive attention from that point on, but was also forced to adjust his game later in the season as the Eagles’ midfield took several blows in the injury department. Forced into the middle for stretches, Gaff had double-figure contested touches twice as the season wound down, impacting his run and carry.

With some troops scheduled to return for their clash against the Pies, Gaff’s outside run will be vital on the expanses of Optus Stadium as West Coast looks to get into the nitty gritty of the post-season.

And so, three Eagles, a couple of Tigers and a mix of others get us rolling in the year-end Mongrel 50.

Who should be rated higher?

Check out ranks 40-31 coming in the next couple of days.