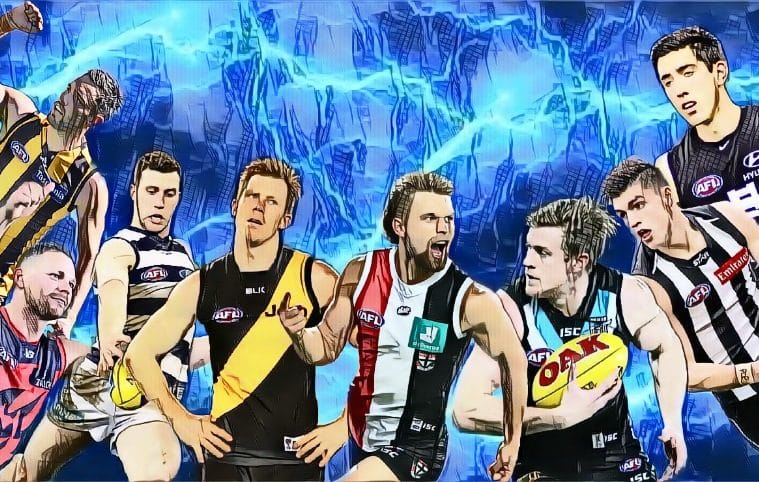 Ah yes, the snubs and the disrespect… all part of the annual naming of the All-Australian team, it seems.

There are only 22 places in the All-Australian team, and to be honest, the selectors have a hell of a job. That’s no excuse for selecting players completely out of position, though, is it? Dusty in the pocket. Midfielders on the flanks despite genuine forwards missing out – it’s a bit of a joke.

Your favourite missed out and you’re pissed off – there is not much that will placate you.

Every season we compile a team of the next-best All-Australian team and there has been people who have actually preferred it to the official version. Let’s see if we can continue that trend, or have it grind to a sudden halt with the 2020 version.

Let’s get into it.

Now look, Lloyd was never going to make the team, but I have watched him all season and if you think he is a player that a) doesn’t play on anyone, and b) doesn’t win contests, I reckon you’ve got your head stuck up your backside from about three seasons ago. He stepped right up in the absence of Dane Rampe.

May wasn’t good enough to make the forty… shocking call. He has been monstrous in the back half of the season.

And Ridley has been the shining light in a dismal year for the Bombers.

Geez, this is a strong half back line.

A killer in yellow and black, Vlastuin off the half back flank makes the lives of forwards a misery. Beautiful reader of the footy, stands up in big moments and shirks no issues.

I thought Weitering was a lock for at least a bench spot. Darcy Moore was tough competition, but surely he’d be worthy of a backup role. Nup… apparently not. Selectors don’t watch Carlton games.

And another I had to make room for in this team was Brayden Maynard. He had a great 2020 and not only took on big jobs, but provided valuable run and carry for the Pies.

The rest of the midfield, I reckon they got about right, so Gaff and Oliver across this line strike me as about right for the season.

So, this half forward line has 87 goals between them. Yep, they do what they’re supposed to do as forwards.

Now, let’s move onto the players who were actually selected in these roles.

Dixon, I have zero issues with – the best contested mark in the league deserved the CHF spot over Tabs as he was a dominant presence in more games than his Freo rival.

However… a pair of blokes with 22 goals between them for the season got the nod to man the half forward flanks in the actual team whilst genuine forwards got screwed.

I like Bont and think he is a wonderful player, but to have him anywhere near goals in a team of the year is just plain wrong. Ditto Dangerfield. 11 goals each for the year. Gunston or Butler had more than both of them combined.

Oh, but it’s not just about kicking goals, right? The disposal numbers of Danger and Bont surely justify their selections, right?

Well, they are bloody midfielders! They should be getting plenty of the footy. Poor effort here from the AA selectors. If they were good enough to get in, it should have been as mids, or on the bench.

I feel for Papley – again, Dusty is a monster and can get into the team on his merits as a midfielder. 15 goals for the year for Dusty, opposed to 27 from Papley. I can’t understand it…

Josh Kennedy was the obvious choice for the backup full forward, whilst Jack Riewoldt has played a selfless role for the Tigers, often in the role as decoy leading forward and still managed to slot 28 goals.

How the hell did Max Gawn leapfrog Todd Goldstein in the first place? Gawn’s main strength – hit outs, right? He was sixth in the league. Know why? Because he missed three games in a 17 game season. Goldstein missed none. He is a warrior – got absolutely stitched up this season.

Parker had another excellent season, sneaking forward to snag a few late in the season… with six goals I am surprised they didn’t slot him in at the other forward pocket and relegate Liam Ryan to the B-team.

And Jarryd Lyons has played the role of unsung hero for the Lions this season, often overshadowed by Lachie Neale, yet powering their midfield in times of need.

I know this is heavy on defenders – I found that there were several standouts this season who just didn’t get recognised.

Jonas was brilliant early in the season before settling into his regular unassuming Jonas-role.

Luke McDonald had a career-best season, playing as a tagger early on, before slotting into the role of rebounding defender and being one of the bright lights for the Roos.

Hugh Greenwood led the league in tackles and gave the Gold Coast Suns the element of toughness they were sorely lacking.

And Jayden Short is just about the most underrated run and carry bloke in the league.

There were more I would have liked to slot in… maybe I should do a third team?

And finally, this is the third season I have put together this B-Team, and one bloke is now making it his own.

How unlucky is he? The selectors just do not rate him at all.

Sorry fellas, I’ll have a word to KB, Richo and the rest of them and see if I can get you in the A-team next season.

And here’s our effort as a team from yesterday – I reckon it’s a bit better balanced.