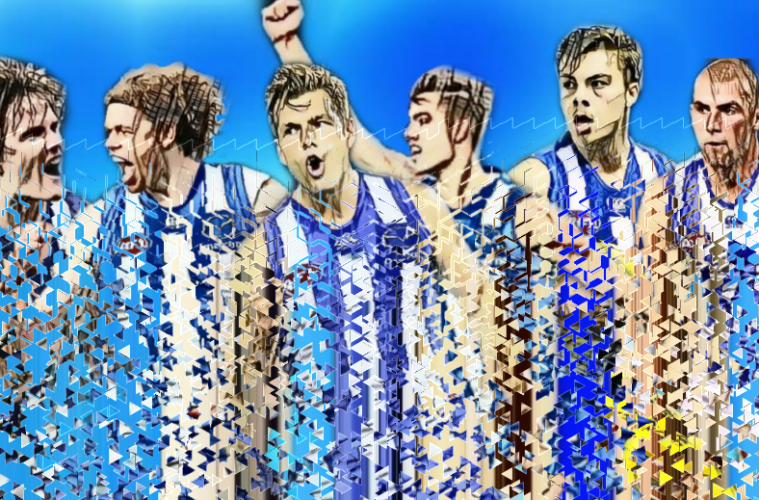 What in the world is going at with the Kangaroos at the moment?

After a horrid season, North Melbourne is in the process of dismantling its list in the hopes that a rebuild will be painful, but no longer than it absolutely has to be. But what has happened at Arden Street in 2020?

We’ve all been in relationships, right?

Well, most of us. Things seem to be going great. You ponder whether this is “it” and whether this person is the one you are going to spend the rest of your life with. You look across the table, or couch, or bed if you’re lucky, and your eyes meet.

It’s a match made in heaven.

As little as 18 months ago, North Melbourne were in love with Ben Brown. With the big full forward in the process of producing his third-straight 60 goal return, all signs pointed to a happy, healthy relationship between the team and the player. It was thought that as North Melbourne went ahead to push for a spot in the eight in 2020, it would be on the back of Ben Brown once again being one of the top three forwards in the game.

It was a pretty safe bet, right?

Brown was coming off a second-place finish in the Coleman Medal race each of the last two seasons after a fourth-place finish in 2017. Many tipped him to finally take home the prized medal in 2020 as the Kangaroos challenged for finals.

Many were wrong, including those pulling the strings at Arden Street.

Brown found it difficult to get going in 2020, kicking multiple goals just once through the first eight rounds of the season, before injury hit in his ninth outing of the season. He did not pull on a North Melbourne jumper again for the season.

And now, he never will again.

Yes, we’ve all been in relationships, and when contract negotiations stalled between Brown and the Kangaroos, the looks exchanged were no longer those of star-crossed lovers with dreams of what could be. They were of a couple drifting apart more and more by the day. The memory became brighter than the hope for the future as the North Melbourne season spiralled, and it ended with a disastrous 3-15 record.

As the season came to a halt, it became apparent that all that was once smooth sailing in the Brown-North relationships was now on the rocks. And it was taking on water, fast.

Over the last couple of days, North Melbourne has asked Ben Brown to start looking for a new home. Unprepared to commit to him in any capacity, contract negotiations have ended and Ben Brown will now look to find a new place to play football. Even worse, in announcing to the world that Brown should look elsewhere, the Roos effectively diminished his trade value. If he has to leave, why pay a heap for him?

And he’s not alone in parting ways with the club.

This morning, Jared Polec, one of North’s newer beaus, was asked to start seeing other people.

Others weren’t treated so well.

Jasper Pittard, who came to North Melbourne from Port Adelaide along with Polec, was simply dumped. North didn’t even take him out for coffee to break the news. He got the relationship-version of being told it’s over via text message.

Now comes word that North are happy to entertain offers for Shaun Higgins. They’re not only dumping those they were all doe-eyed about – they’ve turned the corner and become pimps as well!

So, what has gone so terribly wrong at Arden Street this season? And how did it come about?

The 2020 AFL season should serve as a warning to any club thinking they can squeeze a competitive season out of the team and avoid a rebuild. And in case you need another example, Exhibit B comes in a brown and gold ensemble.

The injury to Ben Cunnington robbed the Roos’ midfield of its grunt, leaving 22 year old, Jy Simpkin to shoulder a huge load in the middle. Initially, he did so and managed to more than hold his own against some of the league’s best. However, after the first six rounds where he averaged over 23 touches per game, he hit a wall and the Kangaroos felt the loss of his stellar play keenly. Simpkin would hit 20+ possessions in just four of the next 11 games as the weight of carrying the midfield became a little too much to shoulder. He got some help from Jed Anderson, but if we’re being honest, Anderson is a good, hard-at-it backup. He is never going to be an elite midfielder.

Rhyce Shaw moved Shaun Higgins to the wing in the hopes he could generate more outside run, and whilst Higgins got plenty of the footy, the impact of those disposals were questionable at best. He had 5+ inside fifties just once for the season. He was equal 56th in the league. As a wingman with over 21 touches per game, that is nowhere near potent enough.

North struggled in defence, with the retirement of Scott Thompson and the injury to Majak Daw forcing the club to sign Josh Walker. This turned out to be one of the club’s wins of 2020 as Walker’s no-nonsense approach exactly what was needed. But North had needs elsewhere and no one to fill them. As such, Walker was moved forward.

Their small forward stocks were depleted as well, with Kayne Turner injured for the majority of the season. He was soon joined by the promising duo of Curtis Taylor and Tarryn Thomas. The Roos were forced to use Josh Mahony as their small forward, despite being the youngest player in the league, and one of the lightest.

Throw in the fact that the best tagger in the game at one point, Ben Jacobs was unable to get on the park for the second successive season, and you start to get the picture that the situation North found themselves in is as much the fault of injuries as it was poor list management.

But there is plenty of fault to go around when it comes to North’s 2020 performance. And list management does not get away unscathed by a long shot.

Mentioned earlier, Jasper Pittard failed to register another game following the club’s Round 11 loss to Melbourne. A defender by trade, and a pretty good one through the first third of the season, Pittard was trialled as a defensive forward on Nick Vlastuin in Round 7 and again in Round 8 against Sam Docherty, but it was not his ideal position. It was as though Pittard’s failure to deliver in this new role was enough to turn the coach off him. And if there is anything else to it, I am unaware.

Despite being added to the leadership group to commence 2020, Pittard was now no longer required. It seems a little strange. From belief in a player to washing your hands of him in a matter of months.

Mason Wood was tried as a half forward. Then tried again. And again.

He played eight games, notching just three goals in total, and less than three marks per game. In effect, he was taking up space as he failed, and failed again. Then again.

Polec was dumped from the team during the season. Some in the media speculated that he was not applying himself in the way expected of one embodying the “Shinboner Spirit”. Brought to the club to provide outside run, Polec had 23+ touches in five of his first eight games of 2020. After being dumped, he would fail to add another game with that many touches until the last round of the season.

Too little, too late, apparently.

But in dumping Polec for basically doing exactly what he was brought to the club to do, Rhyce Shaw aided in eroding the confidence of proven ball-winner, and one that could have been a part of whatever revival he has planned for North Melbourne.

I’m assuming he has one…

Whilst North fans may be looking hard at the list management of the team and laying blame at their feet, the decisions of the coach have left plenty to be desired, and much that can be questioned.

However, whilst there are some storm clouds on the horizon, and the rain seems to be tumbling down right now, not all doom and gloom going forward for the Kangaroos.

Well, not yet, anyway.

Their stocks of up and coming stars are strong. Nick Larkey and Cam Zurhaar have the potential to be either a duo to reckon with up forward, or fall into the category of good players who don’t work hard enough. It was David King that highlighted the fitness of Zurhaar and how he should be focused on becoming 2021’s version of this season’s Christian Petracca this off-season. Whilst Zurhaar plays the kind of game I want to tune in to watch, he doesn’t do enough. The way Brayden Maynard was able to run off him in Round 13 should be replayed again and again to get him off his backside in preparation for the upcoming 2021 season.

In that game, Zurhaar finished with ten touches and was held goalless. Maynard had 26 touches, six tackles and rebounded the ball five times. He also ran for a huge 667 metres gained.

Larkey’s 2020 run was halted by injury and poor delivery, but with just one game of 4+ marks from his ten appearances, he needs to impact the game more often. An increased fitness base will improve that greatly.

Luke Davies-Uniacke’s development would have the Roos breathing a huge sigh of relief. After two seasons where he surpassed the 20-disposal mark just twice, LDU did it four times in his nine 2020 outings. And it wasn’t just the number, it was the poise, the willingness to take the game on, and the explosiveness that made the North fans smile. He might be their next genuine star.

Suspect in recent seasons, North’s list management now has a huge challenge at its feet – fix what they’ve broken. They’re in the midst of their cleanout, and doing their reputation no favours in the process. Recruiting players to the club only to offload them less than two years later speaks of a club devoid of a clear direction. It is an issue they need to rectify immediately – they have had enough trouble attracting free agents without the reputational damage thrown into the equation.

If they are investing in youth and in a rebuild, targeting some of the players on the fringe at GWS and Gold Coast would be advisable. Brayden Fiorini, Will Brodie, Jackson Hately and Jye Caldwell would be long-term investments who are finding it difficult to crack into the best 22 at the youngest AFL clubs.

They have made the unkind cuts (yet somehow Shaun Atley looks set to become 250-game player at the club in the next couple of years) and are ready to build with purpose, but there can be no fluctuating on this direction, irrespective of whether they finish 18th or 12th next season.

And what should this plan entail?

Nothing worthwhile ever is.

This has been a disastrous 12 months for North Melbourne and its fans and you get the feeling that after getting it so wrong heading into 2020, the club has to get it right heading into 2021. It not only needs to restore the faith of the playing group and the supporters, but of the AFL community in general. Players are watching how the Kangaroos have treated Polec, Pittard and Brown and they aren’t as silly as you’d think.

How North travels over the next 12 months will have a bearing on who opts to join the team and who opts to look elsewhere.

They cannot afford to get things wrong again. The drums will start beating if they do, and they play a tune no Kangaroos supporter wants to hear.