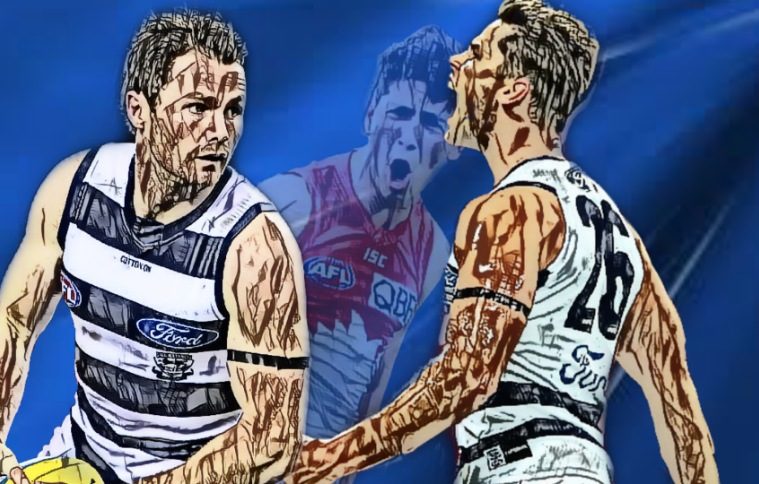 With only one day left in this weird and wonderful 2020 home and away season, it’s time to take a look at a game that ended up being far more interesting than many would have predicted – welcome to a not-so-quick yarn.

Early Sunday afternoon, fifth-placed Geelong met 16th placed Sydney for a match-up where a win for the Cats would secure a top four finish for the 11th time in the past 14 years.

With so much on the line, you would have been forgiven for thinking that the Cats were going to run away with an emphatic victory, but it wasn’t quite that simple.

Geelong came out flat and Sydney was well and truly up for the fight. The Swans jumped out of the gate full of energy and earned themselves an early 19-point lead. The Cats pegged them back on the scoreboard and were within two goals by halftime but looked unconvincing.

Sydney let some chances go begging and their ten-point lead at half time was about two goals short of where it should have been.

The third term was more of the same early on, with Sydney looking more likely and managing to convert a couple of half chances into majors. Towards the end of the term the Cats got things on their terms and Patrick Dangerfield began to have a real impact up forward.

This continued into the final term as Danger bagged two big goals to give his side an 11-point buffer with ten minutes left. But Sydney didn’t quit.

Coming home strong, the Swans threatened to spoil Geelong’s party right up until the final siren, fortunately for Geelong, Marc Blicavs denied a quick snap from Sydney youngster James Rowbottom which would have made it all square at 69 apiece, but it wasn’t to be for Sydney.

The final score was Sydney 9.9 (63) to Geelong 10.9 (69). Among the best for the Cats were Sam Menegola, Paddy Dangerfield and Jake Kolodjashnij. While for the Swans, their usual cast of Jake Lloyd, Josh Kennedy and Luke Parker were prolific.

Let’s be honest, the Cats got away with one here. They managed to hold their nerve at the death and eke out a victory after only playing one and half decent quarters of footy, but Sydney left the door open for them, particularly in the first half.

Tom Papley alone could have ripped this game apart had it not been for errant kicking in-front of goal. His two goals were marred by his five behinds which all came from kickable opportunities.

Basic skill errors, poor decision making and a lack of desire from Geelong would have had fans scratching their heads.

Conversely, Sydney spent most of the day moving the ball with confidence, making decisive decisions and fluidly hitting targets. But when push came to shove, Geelong was just too good to let it slip away and a brief lapse early in the fourth from the Swans was all it needed to turn the tide.

Without being too harsh on the victors, credit where it’s due for staying in the contest and having the class to come from behind and snatch the four-points, but following a shaky month the Cats need to find their groove if they’re serious about a deep finals run.

YOU LOVE TO SEE IT

Gee, he’s not bad is he? It’s great to have Gary Ablett back on the footy field and firing. Arguably the best field kick in the history of the game, there’s no doubt he still adds an awful lot to his side across half forward. If he’s not hitting his targets on the chest, then he’s putting it exactly where they need to be. A joy to watch even in the twilight of his career.

Three goals and two behinds for Danger in this one, including two pivotal goals in the final term. After Richmond gave the rest of the league a blueprint for beating Geelong’s forward line last week, Chris Scott put his faith in his main man and Danger delivered. Not always the most reliable set shot, it was a relief to see Paddy kicking through the ball and keeping his composure under pressure – I wonder if he will keep it together in finals?

Sydney has found one here, 20-year-old Justin McInerney can play. Two goals and 16 touches saw him as the Swans second-most prolific forward behind only Papley, but what impressed me most was his class. The kid is a smooth mover and was rock solid in-front of goal, not only converting his two half chances but making them look easy. Like a few of the Swans youngsters (more on this later), McInerney has had a terrific final third of his 2020 campaign and I’m excited to see what he can do in the future.

Just one grievance for you this week and maybe it’s a bit harsh, but I’m sick of seeing good teams come out with this ‘to cool for school’ attitude against lesser sides. It’s been a mainstay amongst the top eight throughout this season and the worst part is, often teams don’t learn, like today for example – the Cats got the choccies despite barely getting out of second gear.

Without discrediting the Swans too much because they gave it their all, Geelong is a far better side and with a double chance on the line, it’s inexcusable for them to require a rocket up the backside to show a bit of G’nD. It’s this kind of complacency that will see the Cats sent home early into their finals campaign. They’ve had a down month and the time is now to pull their fingers out.

Five wins and 16th on the ladder isn’t what any team wants from its home and away season, but there’s plenty of silver linings for Sydney to take from this bizarre 2020 campaign, namely it’s youngsters. I’ve touched on McInerney, but another one I really like is James Rowbottom. At 20-years-old he’s already tough as nails, unafraid of winning his own footy and relentless in his effort. Already reasonably filled out for someone of his age, I reckon he’s about 10kg’s away from being the perfect man to fill the inevitable void that will be left by Josh Kennedy’s retirement in the next few years. Dylan Stephens is another who looks like a steal, and Tom McCartin just oozes potential. Along with the likes of Nick Blakey, who found a home on the wing after a horrid start to the year, Will Hayward, who should be the next Gary Rohan and of course Jordan Dawson, who took huge strides this year, there’s plenty of talent for the Bloods to develop in coming years.

One quick question though, what did people make of Ollie Florent’s year? Personally I was a bit disappointed, I had high hopes for him to really develop into a reliable midfield stalwart, but inconsistency seems to have stalled his development.

The heat is on. They’ve said it themselves, “this is our year”. Whether they face the Power or the Lions, the expectation for the Cats will be victory and rightly so. This particular Geelong outfit has had its struggles in finals of recent years, but its experience alone should be enough to get it into a Preliminary final at worst – anything else will be considered a disappointment.

The real question for the Cats going forward is, can they beat the Tigers? It feels almost inevitable that if Geelong are to go all the way this year, they will need to beat Richmond. And I’ll be the first to admit that I’ve been tough on the Cats here, but it’s only because I know they have the personnel to get the job done – but do they have the mental toughness? I’m not so sure.