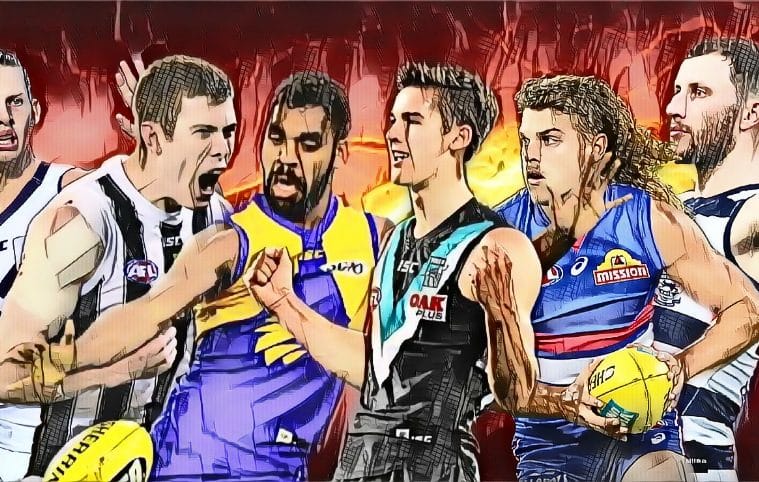 We’ve made it. There’s been drama, controversy, wins, losses, the AFL seemingly making things up as they go along, and the whole COVID thing.

And we’re here at the end.

With one round to go and so much to play out.

There are a couple of spots in the 8 up for grabs, the Top 4 isn’t sealed and even the spoon has a challenger. There’s a lot happening, so let’s get on with it.

Are North Melbourne tanking? There’s been some talk about them deliberately chasing the number 1 draft pick, after some particularly insipid performances. But I don’t think they are, and I can think of 3 reasons why: first, they’d have learnt from Melbourne who was accused of tanking in 2009. Although the Dees were found not guilty, they were still fined, and hindsight might suggest that the Demons haven’t exactly benefited from that tanking experiment.

Secondly, there’s no guarantee that the number 1 pick is going to be the player you need to turn the club around and build a list on. After all, the draft is a gamble and it’s easy to accidentally get Scully and Trengove instead of Martin or even Fyfe.

Thirdly, and most importantly, it doesn’t make any sense at all: there’s too many players playing for their position next year and a rookie coach trying to justify his selection – a job he got due to circumstance rather than a great deal of investigation by the club; and then there’s the whole cultural thing that happens when you take away the competitor’s desire to compete.

So no, I don’t think North are tanking, which is an incredibly worrying thought.

The Eagles’ problems are purely from the hospital ward. They can’t go backwards on the ladder and it’s highly unlikely they’ll sneak into the top 4 because they’ll need Geelong or Richmond to lose.

So, expect the Eagles to rest a few players here. They certainly can’t afford any more injuries and if that cost them an extra win, well so be it. Ironically, the Eagles can afford to tank this one.

Even if the Eagles wanted to lose, they’d still win – and by a lot.

The Giants shot themselves in the foot (again) last week and they’ve got the chance to do it again. St Kilda also shot themelves in the foot, but at least they were using a BB gun – so they just escaped with some broken toes.

It’s pretty much reverse for the Giants, who need to win and win big to have any chance.

If this season is anything to go by, this game will be a highly entertaining (or rather comedic) game as we watch two teams find new way to lose a game of footy.

I don’t quite understand how the Giants got so bad when they’re capable of being so good. But that about sums up half the teams in the competition at the moment. Including St. Kilda.

I think the pressure will get to the Saints here. The Giant are due for a good performance and have nothing to lose. That kind of nothing to lose attitude that often finds you a win. Good finals footy. The type I am definitely not trusting St. Kilda with.

Melbourne are another team pushing for the 8, and like the Giants, they need other results to go their way to get in. Unlike the Giants and the Saints, the Demons managed to find a way to win on the weekend and they’ll be looking to replicate that this week against the Bombers.

The Bombers are having a hell of a time in the media the last couple of weeks. It’s as if certain media people are starting to realise that the Dons aren’t ever quite as good as they say they are. For a bunch of people who are supposed to analyse, they tend to be pretty gullible.

I mean, I don’t know what’s wrong with Essendon. Well, I do. It’s that they have about six good players and no one can work out who the coach is. It must make things difficult.

At least there’s only one more loss to go, and then everything can go back to normal: Essendon massively overrating their players during trade week.

Side note, well done to Bellchambers as he calls it quits. A solid, honest ruckman who probably never got as good a chance as he deserved. And also, to Conor McKenna, it’s a shame, and perhaps a blight on the AFL community that he couldn’t get the support he needed to play out his final year.

Adelaide is enjoying footy in September, but I have a feeling their enjoyment is going to be abruptly ended by the Tigers in their final September game.

You almost couldn’t have written a better script.

I must congratulate the Crows. They’ve really turned things around and if I was a Crows fan, I’d be a lot more interested in what’s happening next year as a result. It’s not as though they’ll shoot up the ladder or anything, but at least there’s something there. Some sign of life. Something to build on.

And well done to them for giving Gibbs a good send off, but probably fitting he went off on the shoulders of his former teammates. Guys he’d actually played with.

Anyway, as much as Adelaide are suddenly wishing this season would go on a little longer, it can’t, and neither can their run.

The Tigers have a top 4 to make, and finals to prepare for. They’ll do just enough in this game.

Kade Simpson calls it quits this weekend, after almost 20 years and 300 games. An impressive career of patience and hard work as he tried and tried and tried to lift his Blues side into contention. I have huge respect for players who do that; who value the club more than their own chances. Amazing to think he didn’t get a touch for his first two games and then averaged about two disposals for the next six. That kind of start would see him on the out in the modern era. Perhaps we should all learn a thing or two about that.

It’s another year where Carlton have just missed out. They’ll rue some lost chances but look to this week to build momentum for pre-season.

Brisbane are second on the ladder, have a series of home finals coming up, and potentially a home grand final and are still trying desperately to be considered a favourite. Yet no one seems to rate them. A big win here, some accuracy in front of goal perhaps, some strength down back, an exercise in midfield domination… it might just give them the boost they need heading into the finals.

I can’t see any result other than a Lions win here. They just need to stamp their authority and they definitely have the chance to do so.

I had an interesting thought today. Who will be the better and bigger club in 10 years: Gold Coast or GWS?

Gold Coast have a plethora of talent and are on the up. After a decade of failure, they’ve learnt a lot of lessons, and seem to have an inspired group willing to put in the hard yards, unlike the flashy Ferrari down the road (yes, it’s a long road). But the issue of the Suns’ fading out throughout a season is still a worry. The Suns have won one of their last five matches and winning the final game of the season can symbolically suggest they can play a season out, even if they’ve limped to the end. It’s a small improvement, but an important one.

The Hawks have lost their last five and are wandering around directionless. We say goodbye to a captain in Stratton and a stalwart in Puopolo, and there will certainly be more, as the Hawks work out whether to go for a full rebuild or hope to write this year off as a bad one and start again next year.

The Hawks look completely bereft of confidence, and I am not sure whether they can beat the Suns, who are tiring, but at least still trying.

I think the Suns win here. They almost need the win more.

If Geelong aren’t careful, they can drop out of the top 4, and lose their chance of a home final. Which is fine, because an away final will probably be at the same place. It’s almost ironic that Geelong might finally get a home final away from the MCG and it’ll still be on a shared ground.

It’s up against the wall for the Swans here. Geelong will be disappointed in their performance last week and will probably take it out on the poor Swans this week.

Because the Swans, despite being capable of good footy, just aren’t showing it. And for Geelong to play poor footy, It’s because a better side has forced them to, and Sydney are a league away from Geelong.

The Dogs here probably must win if they wish to make finals – and they probably should. Fremantle are a capable side, but the Dogs have found plenty of form late with 4 out of 5 wins, and they know how to sneak into finals and then perform when there. They’re a confidence side, and their tails are wagging and their yapping about as happy as anything. It’ll take something special from Freo to stop them, I think.

Freo had their September ruined by Hawthorn again last week. Relying on a small miracle to make finals, it was almost expected that Hawthorn would be the side to ruin it, after religiously doing so in the first half of the decade.

This Freo side are finishing the year strongly and have found their mojo just a couple of weeks too late.

If both sides bring their A-game, this will be a pretty good one. But the Dogs will win it.

The Pies are playing finals. That much is guaranteed now. Port aren’t guaranteed top spot, but a win here will give them the McClelland trophy; the one you get for finishing top that no one particularly cares about. I’m not sure why this trophy doesn’t get any kind of respect. It’s a great achievement to be the most consistent side all year. But I suppose you either win the flag which is the bigger prize, or you lose, rue what could have been, and throw the trophy in the corner with the other 3 that Port already have.

But anyway, what about this week?

Well, Port, like Brisbane, want to win to show that they are a genuine threat. The Pies want to win because beating a team like Port sends a great message. In real terms, there’s little impact on the result of this game, but internally it’s very important.

I am also confused why this game isn’t at the Adelaide Oval. If Adelaide is good enough for the Hawks and Gold Coast, how come Port couldn’t snare an extra home game? The AFL certainly moves in mysterious ways.

It’s almost a flip a coin tip this game. You would think Port would win it pretty comfortably, but there’s something about Collingwood that says they shouldn’t be written off. That something is the fact that they’re still a good side who were a decent kick away from a premiership just two years ago and were certainly not disgraced when they missed out last year. Add back in a firing de Goey and Treloar, you don’t know what this team is capable of.

That said, you still have to go Port. Last year does matter. This year does. And we’re not quite at finals… yet. 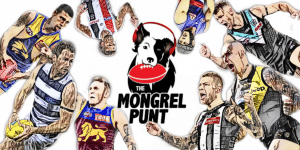