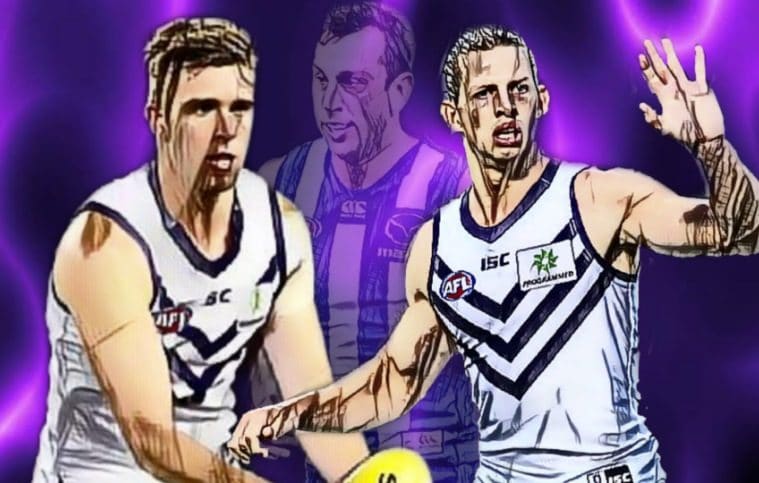 Alright, this game was never going to go down as an instant classic. However, sitting in Victoria, locked down in my home with consistent rain outside, I snuggled up in my dressing gown and settled in for my entertainment from two of my secondary teams. I do have a serious soft spot for North and also for this current iteration of the Dockers team. It may be because I’ve now seen a fair bit of both teams over the last year and half as I’ve covered their games for the Mongrel Punt.

The ‘Roos have had their injuries and experimented with the playing stocks at their disposal. I expect a lot of movement from them this off-season. Nonetheless, it has been a disappointing season. A mention must go to Todd Goldstein playing in his 250th AFL game.

The Dockers are the upstarts. A rejuvenated team with a couple of experienced warriors left. They’re plucky and I like it. They’ve played a lot of wet weather footy this year and have consistently been up for the contest, even against far more mature teams. They’re still not the most attacking team going around, but there is something about the young players coming through that makes me believe in their potential.

But enough preamble. Let’s get into the stuff that mattered.

I’ve compared him to Wine and Cheese multiple times this year, but Mundy just doesn’t go away or get better. He may not have the CV to match the likes of Ablett and Burgoyne, but he deserves to be recognised as the absolute warrior he is and the effect he has on such a young group around him.  24 disposals with seven score involvements and five clearances for Mundy in this one in what was a virtuoso performance.

The little engine that could.

The kid is too short and not that quick, but what he lacks in some areas, he makes up for in commitment and his finishing. He just seems to understand exactly what he needs to do and goes out there and plays the best possible game he can to achieve that.

There was a contest in the third quarter where Schultz when toe-to-toe with Todd Goldstein. Goldstein was praised for winning the footy, which he deserved, but I was pleased with Schultz commitment to contest. The little guy didn’t even blink as he stared down Goldstein and got straight back up after being bowled over. Keep bringing that, mate.

The number one intercept player in the competition, and an absolute lock for All-Australian this year. Ryan has absolutely lifted himself to the leader of the Fremantle defence. It was arguably a standard game for Ryan such has bene his output this year. 18 disposals at 83% efficiency, seven intercept possessions, five marks, 300+ metres gained, and a huge amount of North Melbourne attacks thwarted.

These two. I’m doing them together because their games were mirror images. Talk about out of the box.  I will say Higgins was respectable on one of the wings, but he and whoever else was running on the other wing, were clearly beaten by Acres and Aish running absolute laps of the oval in this game.

They had all the space they pleased. Acres and Aish had a combined 47 disposals with only 11 of them being contested. Acres would have nine uncontested marks, six inside 50’s and 545 metres gained. Aish would have five intercept possessions and 470 metres gained of his own.

Both players at their second or third club and it’s good to see the Dockers landing some winners in their trades.

Fyfe would be the opposite of the previous two players mentioned. He would have a game-leading 13 contested possessions on his own. A slow start for Fyfe in this one, but once he got going, he just did as pleased. 24 disposals, six score involvements, six clearances and an equal game-high four contested marks. J

It sounds like just another day at the office for one of the game’s best midfielders. He may not be playing finals this year, but something tells me Fyfe is really enjoying his footy under Justin Longmuir.

I’ll be upfront  – I am no fan of Walters. He is a fantastically skilled player, no doubt, but I cannot stand the constant playing for free kicks and whingeing. Just go for the footy.

McDonald is almost the opposite. I have been critical of McDonald a bit this year, but in this game, he took the dangerous match-up on Walters and provided a real presence around the footy. Went back bravely in the first quarter in front of Lobb and had a real element of leadership in his game today.

Walters had some really good moments, including a big mark in the second quarter. He’d be rueing some missed shot in the last quarter, but I felt it would’ve been unjust as I had McDonald winning this one.

If you really think about how much footy went into the Dockers’ forward line and look at the stats of the two players, it makes sense. McDonald had ten intercepts, including multiple telling one-on-ones with Walters. Had 19 disposals to Walters 13 (and this wasn’t boosted by kick-ins as with previous weeks). It would’ve been easy for Walters to lift a gear and finish with 5-6 goals and 20+ disposals on a lesser opponent. I tip my hat to McDonald for sticking tough in the face of a nightmarish situation.

I gave these points to Darcy. It’s hard not to when you look at the game. However, much like McDonald, I cannot fault Goldstein. You can tell he gives everything he has out there, and he has been an outstanding ruckman over a long period of time, but when things aren’t going your way, you can feel like you’re working twice as hard for half the reward.

I’m sure that’s how “Goldy” felt out there today. Goldstein would win the hitouts by six, but Darcy would beat him in disposals, score involvements, marks, tackles, and drift forward for a rare goal.

He has been a beacon of consistency in 2020. Not a high disposal getter, but he just makes them count, more often than not (we’ll ignore that last set shot in the last quarter).  Taberner is now comfortably ranked alongside the top big forwards in the game.

He is another genuine chance for the All-Australian team from the Dockers. He probably could’ve filled his boots up a bit more in this game, but he still kicked three goals and delivered a respectable performance.

Zurhaar had his moments. He is a bright spark at times in an otherwise dim performance from the ‘Roos. He finished with a couple of goals and competed well in the air, which can’t be said about a lot of his teammates.  Zurhaar actually looked like a threat out there and things seemed to happen for North when he was near the footy. Obviously not the promising star he was last year, but the potential is still there. He just needs to find it more consistently.

The rest of the Fremantle team.

I’ll just throw the rest of Dockers in here.  A few names I can’t get to that I know Fremantle fans will want mentioned. Cox, Lobb and Wilson all were very good. Brayshaw, Hill and Cerra also serviceable. Serong was solid. He didn’t do himself any disservice in the hunt for the NAB Rising Star.

How about some consistency?

I keep hearing about this protected area. Can anyone explain where it is and who’s allowed in it? I can guarantee you, whatever definition you give me, I can find multiple situations where it was and wasn’t applied. Can the umpires just keep it simple? If it affects the play, pay it. If it has absolutely no bearing on the play and is incidental at most, maybe think twice.

Either way, get together before the game and work out how you’re going to play it, and stick to that.

A Lack of Effort

At half time Fremantle had 45 uncontested marks. That’s not a good stat for any team to be giving up. Couple that with the fact that 15 of North Melbourne’s players had five disposals or less (Fremantle had only seven) and you have an indication of which team wanted it more. The nail in the coffin was the Dockers had also out-tackled North Melbourne by 12. Something tells me that North cannot wait for this season to be over.

At the final siren, these stats would finish 42 – 75 uncontested marks in favour of the Dockers. North Melbourne would finish with 11 players with less than 10 disposals to Fremantle’s two (one of which was Hogan with four goals). Fremantle would win the disposal count by 97 and the tackle count by six.

More of the footy and still sticking more tackles – that combination almost always results in a belting.

I don’t know if it’s a record or not, but Fremantle gave North Melbourne an absolute lesson in contested marking in this game. The final tally finished 6 – 19 in the Dockers favour (I think at one point it was 3 – 19).

It was just staggering. I haven’t seen many sides look so dominant in the air. It was as if they’d harnessed a mixture of the Eagles and Cats who I associate more with that sort of aerial prowess.

I have to admit, one of my favourite moments from the coverage was the outlandish Hungry Jacks ad that threw serious shade at McDonalds. I just had to laugh. Solid Marketing.

He had an interesting game. Four goals is a very respectable return. Hogan seemingly got more comfortable as the game went on. He only had six disposals, but boy he made them count. He may owe an umpire a beer for getting him going though as he was hardly sighted as his first two goals came from a downfield and a 50-metre penalty. Also, Hogan had just the two disposals up to the point of his second goal, but he had apparently sent the ball inside 50 four times. Come again? There’s a beer in it for someone who can explain that to me.

I expected a Dockers win, but was hopeful of a positive showing from the Kangaroos – something for North fans to hold on to. Unfortunately, the team did nothing to deliver that hope. A few more players deserve a mention for their efforts in Anderson, Dumont and Simpkin, but the rest were woeful.

For Fremantle, they have one final game against the Bulldogs. No doubt they are setting themselves for a big finish. Still waiting on other results, but they could cost the Bulldogs finals with an upset, and for even more motivation they could finish the season with eight wins.

When you think about how some of the games have played out for the Dockers and the games that just slipped away, particularly all the games in the wet, and you would feel confident as a Freo fan of what your team is building towards.

For North Melbourne, the end of the season can’t come soon enough. Just get there, re-set the list and start getting things the way you want. I am a lot more positive about North Melbourne than some others. I agree with some experts that their off-field set-up looks built to deliver improvement and eventual success. They now need to go through the process to bring their on-filed side to the same level.

This was meant to be a short review, but of course, I have waffled and haven’t even given you any decent pop-culture references. Time for a wine.