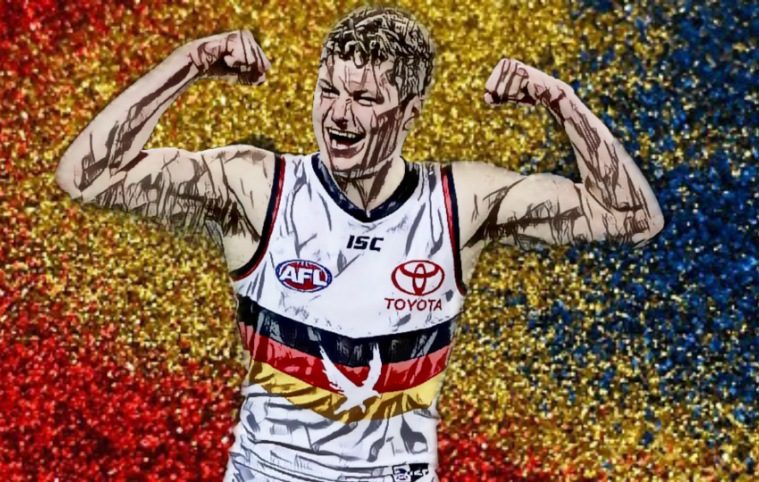 To say that the Adelaide Crows’ 2020 season is a campaign that they would rather forget, is a bit like someone telling you that the sky is blue, the grass is green and Jeffrey Epstein didn’t kill himself: We all know it and we all get it.

The proof has been in Adelaide’s results; they’ve copped heavy defeats most weeks and it’s only been across the last few weeks that they’ve started to genuinely be in contests. They were competitive against the in-form Cats last time we saw them and before that, they gave Collingwood a run for their money and made the Bulldogs and the Demons nervous for a moment before both of them broke clear.

It made this game, on the first day of September, against the out-of-sorts Hawthorn a bit of an exciting prospect. On-field, the Hawks have been poor since the reset, and over the last couple of weeks they’ve looked completely depleted. James Sicily, Ricky Henderson, Jaeger O’Meara, Jon Patton and Isaac Smith are all out with injuries.

What made things all the more bewildering was Alastair Clarkson’s decision to ‘manage’ Liam Shiels, Sam Frost and Will Day – all three being bright spots this season. Wouldn’t you rather have them playing in a winnable game? I’m not a four-time premiership coach, but some of these decisions have me confused.

All things considered, it was a great night to be an Adelaide supporter, as they notched their first win of the year. The outsiders believed that they weren’t going to win one at all this year, but I’m sure Matthew Nicks and his troops would’ve thought otherwise.

Let’s break it all down with another review.

Being the worst team in the competition for fourteen weeks, it wouldn’t take a rocket scientist to explain that Adelaide are the worst in the comp at winning the contested ball. By quarter time in this game though, they were +16 on the Hawks as they worked hard around the stoppages. By full-time, that extended a margin of +25 on the night.

Matt Crouch has had a bit of a maligned year this season, having been dropped earlier in the season and plenty of doubt about the future of his brother Brad as well. But both of them were switched on from the outset. Contested ball is their bread and butter and these two, along with Reilly O’Brien combined for 35 contested possessions as all three of them played big roles for the club.

The thing that took me by surprise is the Crows that followed. Laird (nine contested possessions) doesn’t shock me, because he’s been playing more in the middle, but Darcy Fogarty and Elliott Himmelberg both had eight as key forwards which is bloody encouraging to see if you’re a Crows fan.

If Reilly O’Brien was playing at a Victorian club, or even as part of a winning team, we’d be heralding him in the same vein as Rowan Marshall as one of the rising stars in the ruck department.

Jonathan Ceglar put up a good battle, but O’Brien outworked him around the ground and showcased just exactly how he goes about his footy. He was the equal-leader on the ground for contested possessions, with 12 of his 19 disposals being contested. He also took eight marks, five of those contested, six intercepts, seven score involvements and four inside 50s at 73 percent efficiency.

It’ll be hard to pick the best on ground from this one, but the Adelaide big man would be up there in consideration, he was awesome to watch in the air.

The Kids Will Be Alright (Adelaide)

Looking at Adelaide’s 22 and how they played makes me feel optimistic about where they will head in a few years. Expect some more beltings along the path but watching these kids continue to take the game on is exciting stuff. I loved Tyson Stengle taking the game on and have a few shots on goals and set others up will have something to excite the fans. Whilst not classified as a ‘kid’, Shane McAdam has been a very nice find this year as well.

I’m loving the way Harry Schoenberg goes about his football. He doesn’t hesitate to back himself in for a contest and as he showed, is handy for a goal or two – he’s got a bit of something about him. Chayce Jones also bobbed up for a couple of goals, Lachie Sholl was taking the game on and Lachie Murphy’s use of the footy inside 50 was elite – and that goal in the final quarter, gee whiz – Jack Newnes would’ve been impressed with that.

A big reason Hawthorn have dropped so far down the pecking order is there efficiency going forward of centre. Tuesday night saw them go 37 percent inside 50. Just for comparison, the Crows went at 61 and they couldn’t kick a winning score in the thirteen previous games.

Just so you know how diabolical these entries were, I’m going to highlight Luke Breust. He didn’t get a lot of the footy, being well held by Luke Brown all evening, but he had two opportunities and made a poor choice in one and nearly made a meal of the other. The poor opportunity was kicking it to Jarman Impey, who was one out with Kyle Hartigan on top of the goalsquare. The other, he ran onto the footy inside 50, and instead of kicking a drop punt, he ran on an angle and snapped it from 25 metres out, which fell short in the goal-square. Luckily Mitch Lewis spared his blushes as he kicked it, but the point still stands.

A lot of their kicks inside 50 were sat on the heads of the Hawthorn forwards, as opposed to kicking into open space, where a lot of forwards thrive and run on to. There were plenty of opportunities for the Hawks to do it, but they just hacked it long without looking.

Give Up The Chase Clarko

If you read the headline and thought that this was a column about campaigning for Alastair Clarkson to be sacked – sucked you in big time.

Clarko can coach the Hawks for as long as he likes – he’s got the premierships to back it up. What I don’t like this idea that he still thinks they’re in contending mode. Hopefully that changes after this game. This ‘Moneyball’ ideology that recruiting players with some kind of deficiency – whether it be physical or in a skills sense – is not working and its clear as day.

Jon Patton is still injured, Tom Scully is a shell of his former self, Chad Wingard has had his good moments this season, but is not the answer to their woes and Darren Minchington – I’ll put it like this: If he couldn’t hack it at a St. Kilda team that couldn’t cut the mustard for years, why the hell would you even bother?

So to follow on with this, it’s time to ship off some of the veteran heads in this team. James Frawley has played on at least three seasons too many. No disrespect intended to Taylor Walker, but when you give up two goals to a bloke who has barely sighted it this year, you might want to consider your future in the game. I’d also say the same to the current Hawthorn captain Ben Stratton, who has been on a heavy decline for a few years.

I watched the pair in defence allowing McAdam, after he took a mark in the pocket, to run past them both and into an open goal in the third term when the game was in the balance. I’m no Hawthorn supporter, but watching that would’ve had me punching the plaster faster than Clarko.

And as much as I don’t like saying it, I cannot see Shaun Burgoyne playing beyond this year. It hurts because he’s quite a likeable person and I’ve enjoyed his renaissance at Hawthorn after an injury-riddled period at Port Adelaide. In this one, he had a hard time getting himself involved in the contest. No one is expecting him to be best on ground, but he has to do better than 10 disposals.

I’d also be nervous if I’m Ben McEvoy – he is looking slower and slower by the week.

So….What About Some Positives For Hawthorn?

I’ve been critical on the Hawks a fair bit, so let’s give some of those players in the brown and gold some love.

Jack Scrimshaw has been a player that I’ve enjoyed watching develop in front of our very eyes – 22 disposals, six marks, six intercepts and six rebound 50s across half back. He was a top-10 pick back in 2016, but couldn’t find a game up on the Gold Coast. I’m glad he’s getting some games in now, he’s got plenty of good footy ahead of him.

I like James Cousins and it absolutely is beyond me why Clarko opted to leave him in his basement for so long as opposed to being out on the ground. Another 16 disposals, five tackles and went at 94 percent efficiency.

Jack Gunston did everything he could up forward and with the rubbish entries that he was given to make a few of them look better than what they actually looked like. He finished with 3.1  from 10 disposals, three marks and four tackles. It should’ve been four goals if it weren’t for a bad miss in the final quarter, but he could be one of a few Hawks that hold his head high.

I also thought Chad Wingard up forward was threatening early, he kicked two goals in the opening half before being thrown into the middle, where he didn’t exactly do much to help sway the contest in Hawthorn’s favour.

I’m glad that Ben Keays is getting a run at Adelaide. I rated him at Brisbane, but just couldn’t get a run in what still is a Lions midfield that is expected to become elite in the next year or two if it isn’t already. 22 disposals, one goal, three clearances and nine score involvements – At 23 years of age, he’s only going to be better for it.

Tom Mitchell looked on early for a good night, but I think his form tapered off after half time, bit like most of his other team mates. James Worpel I was very disappointed in. He’ll still be a good player, but needed to step up with the Hawks under siege in the middle and didn’t do nearly enough for it.

Changkuoth Jiath didn’t see a lot of the footy this week, but I hope they continue to persist with him – I love that he is willing to take the game on at every opportunity and that sort of testicular fortitude goes a long way with a lot of people.

Brodie Smith put in a nice shift for the Crows, 22 disposals at 77 percent along the wing and at times through the midfield. He also collected nine score involvements, five intercepts, four inside 50s and two clearances.

Lastly, I can’t go without saying well done to Matthew Nicks. It’s one of the hardest jobs walking into a football club that looked broken and lost their way massively. I truly couldn’t be any happier for him than I am right now.

And on that delightful note, it’s time to put an end to this review. Congratulations to the Crows for their first win of the season. They may not get away with avoiding the wooden spoon this year, but they have games against GWS and Carlton to come – and hopefully they can be able to give both sides a run for their money just for some confidence.

Hawthorn well, I just want to see Clarko keep giving these kids a run. Do the Hawks fans a favour and give Jacob Koschitzke a run for god sake and kick Frawley out of the team for good. It’s not like it will get any worse for them from here until the end of the season, will it?