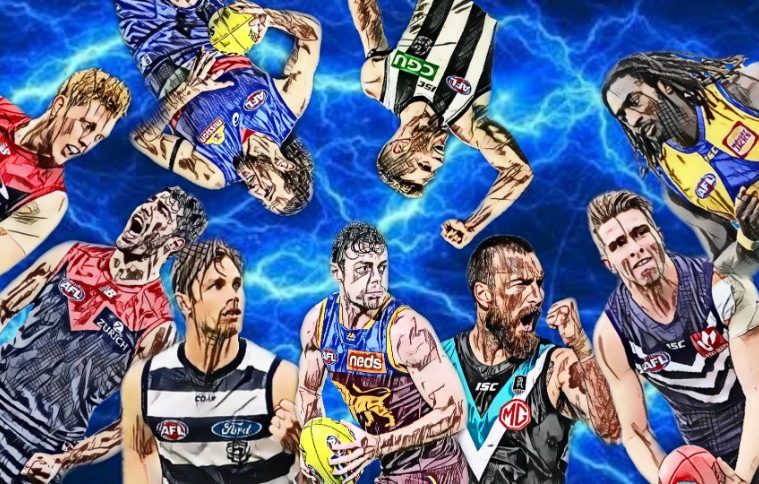 Given we’re pressed for time, with just one day between Rounds 14 and 15, I am quickly putting together the latest version of our Mongrel 50.

If you’re familiar with the set-up, I am cool with you skipping forward to the list… as if I have any say at all, right? However, for those unfamiliar with the concept, having a bit of a read of the formula used may prevent you from sending some abuse my way.

So, you’re still reading – allow me to explain a couple of things before we dip into the fifth incarnation of the Mongrel 50.

The difference in this system to just about every other one out there is that it has a distinct bias toward the most recent four weeks of football. There is no hiding it – this system heavily rewards the players who have had big games over the past four weeks. Whilst anything prior to the last four rounds is not completely discounted, it does incur a penalty of 50%.

The reasoning behind this is that it allows players who are surging, or who have put together three or four weeks of very solid football to blast up the list quickly. It makes for a more fluid ranking system that hopefully reflects players who are playing the best footy right now. Sure, Sam Docherty was killing it in the first four weeks of 2020, but what the hell has he done for me lately?

Yes, the players who were great in Rounds 1-11 are still recognised, but in this case, those who have hit their stride through Rounds 11-14 will be receiving maximum points for their efforts.

So a good body of work is still important, but blokes who have really started dominating recently will also feature heavily.

Well, I reckon that’s on you. I’ve got a bit to get through.

Our Inner-Circle members have been receiving weekly updates and already know those who have sat at or near the top of the rankings on a weekly basis. They’ve been very good about being quiet about it too, I have to say. Thanks everyone.

Below is the fifth cumulative set of rankings. The premise is that we end up with a list that focuses on the best players on the best teams, and one that can change rapidly. I really love putting this kind of stuff together and genuinely think there is a place for it in footy.

I hope you do as well.

At times you will see me quoting their “scores” as I write about each player.

Anything above 50 in a week would guarantee a top ten finish overall for the week. These are the absolute standout performances.

Anything in the range of 35-50 is a very high quality game.

And 20-35 points is pretty damn good too. So if you’re averaging above 30 points for any period of time, it bodes very well. I’ve thrown in the player averages over the past four weeks as well as their season averages to date to give an indication as to why some players have seemingly come from nowhere into prominent places in the rankings.

Apologies in advance for not adding a paragraph or two under every player detailing their rank, four-week average and overall averages as I usually do. Time has just killed me this week with the double-header just hours away. Let’s get stuck in.

After three-straight Mongrel 50 appearances in the number one spot, a lull in form, a surge from others and a bye have all conspired to send Lachie Neale tumbling from the top of the rankings.

Whilst retaining the most overall points of any player (which will hold him in good stead for the end of season rankings – don’t panic Brisbane fans), the 100% weighting of the last four rounds sees the in-form Hawkins and Ryan vault past him.

Ryan actually had a golden opportunity to jump into the top spot overall, but failed in Round 14 to hit the heights that he was able to in the two weeks prior.

Hawkins, on the other hand, has been huge for the past month, notching an average of 52.25 over the past four rounds. For context, Lachie Neale averaged 20.75. That, of course, is inclusive of Neale’s bye.

Some recognition should go to players who have been able to maintain their places in the top 20.

In order for a player to maintain their place – someone like Nic Nat for instance, they have to perform well ongoing. He scored poorly in the first four rounds, but he did score. In Rounds 5-8 he went from averaging 14.5 points per week to 32.5, and over rounds 9-12, he hit 33.25. And over the last couple of weeks, he is at 19 points per week. He is doing all the right things and hitting all the right statistical markers to maintain his place.

Has averaged 34.25 over the last four rounds, bolstering his position. Is really starting to be acknowledged for his importance to the Collingwood midfield at a time they needed someone to stand up.

Rounding into form nicely, Danger has averaged 34 points per week over the last four rounds to see him rocket up the rankings.

With 31.5 points over the past month, Boak has a great body of work behind him from early in the year to bolster his position. Could easily see him finishing in the overall top ten by season’s  end.

A massive couple of weeks from Moore has seen his four week average leap to 27.27, however it is his round 13/14 efforts that have stood out. He has scores of 55 and 46 over the last fortnight.

The move to half back has seen him average 44 points over the past fortnight, allowing him to build on some solid early-season form.

With an average of 36 points per week over the last month, Gray’s return to close to his best could be exactly what the Power need in the run home to finals.

It’s been a really strong run of form from Stewart after his shoulder injury. At 27 points per game over the last month, Stewart is returning to the form that saw him earn back-to-back AA selections.

Not that he has been poor, but in a stats/votes-based system, the Port captain has scored just once in the last four weeks, and that was just 14 points.

Had a purple patch a little while ago, but his last three weeks have produced just 11 points in total.

Living off his stellar early-season form. Just 20 points over the past four weeks.

Massive start to the season, and will have those points to work with in the year-end rankings, but has just 38 points in the last four weeks.

WHO ARE THE NAMES MISSING?

Nat Fyfe sits at 68, Toby Greene at 67 and Zak Butters at 76 (Matt Oman will kill me for having him this low!)

Jordan Ridley has dropped to 78 after a statistically-quiet three weeks. Dan Butler is at 87 after three weeks with no score, and Jeremy Cameron sits at 110 with his Round 14 efforts the only time he has scored any points in a month.

And that’ll do – any questions, please fire me off a message, or add something in the comments below and I am more than happy to answer. Please remember that the last four weeks get 100%  weighting and anything before gets 50% – factor that in before you abuse me. J

Sincere thanks to all our members and those who support us. It is genuinely appreciated.

Now, onto the weekly update for our Inner Circle Members. Huge thanks to those guys for believing in us and helping us grow.

Want more of this kind of stuff? Join The Mongrel. Join us… join us…