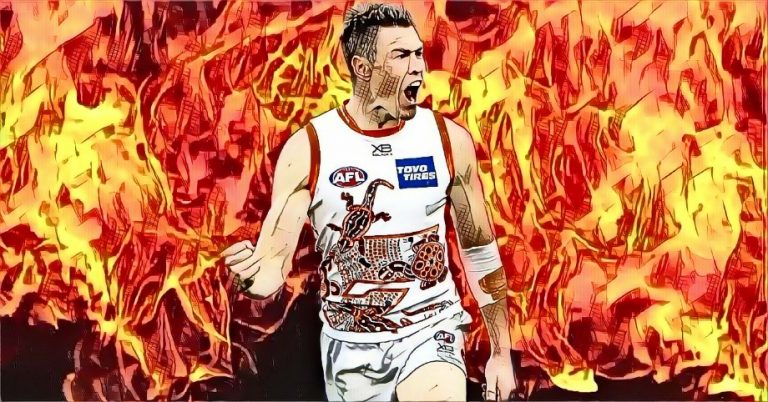 Usually, games that pit the 11th and 13th placed teams don’t generate much excitement. However, I felt pretty excited about the prospect of watching Fremantle and Greater Western Sydney this weekend.

Could last year’s Grand Finalists respond to what has been a pretty lacklustre season? Or would Fremantle continue to spring surprises and put one on the Giants? That’s what I came into this game asking.

Well, the answer we got was emphatic. Good news if you’re a Giants supporter, which means not so much if you’re a Freo supporter. The Giants looked on from the opening bounce and tore apart a Fremantle side that have been impressive in patches this year, but evidently still have a ways to go.

Let’s break this game down with the weekly review.

Just so we’re on the same page here, Luke Ryan is NOT a defender suited for key forwards. What he is though is a beautiful interceptor and swift rebounder when the defence is at 100 percent. Joel Hamling and Alex Pearce have not played this year and don’t look like coming back anytime soon. Freo’s key backs right now are him, Brennan Cox and Taylin Duman, which is basically an understrength back line.

Ryan was matched-up on last year’s Coleman Medallist Jeremy Cameron at the first bounce. Cameron is at least ten centimetres taller than his Fremantle counterpart and a few kilos heavier. As the Giants controlled the opening term, it looked like a tough day for Ryan in the making, with Cameron kicked two early ones after being pretty quiet over the past month and a bit.

Fair play to Ryan though. He’s considered an All-Australian for a reason. He does very well as an undersized key back and he does his part to generate offensive run from the back line. After quarter time, Cameron was hardly sighted until the last quarter. That was when unfortunately Ryan was taken out of the game. He hit a contest hard and landed heavily. Freo medicos didn’t risk putting him out there for the fourth when the game was done. Cameron kicked two goals in the final term to put the game beyond reach.

Ryan was admirable, but I’d give the points to Cameron.

The future is bright at Fremantle, let’s get that right. Caleb Serong, Andrew Brayshaw and Adam Cerra have all been big positives this year at the Dockers, all of them seeing plenty of midfield minutes. However, all three of them were given a lesson by the seasoned GWS on-ball brigade this week.

The Giants’ mids were particularly in the first quarter, keeping Brayshaw to one disposal, Serong to two and Cerra didn’t see a lot of it either, having only the five touches. When you compare that to Stephen Coniglio (nine touches), Tim Taranto (seven touches) and even Matt De Boer was finding the footy (eight touches), they were handed a lesson in winning the footy today, but that’s all part of the learning experience while they’re all still pretty young.

Sean Darcy is also young, and I thought Shane Mumford beat him around the footy, which is something I’d never thought I’d say in 2020. The hitouts were even at 25-24 in favour of the ‘Sausage’ Mumford, but he either won or had a hand in winning centre clearances for the Giants, particularly in the first half when they had the game on their terms.

From an outsider looking in, this is almost up there in the Luke Beveridge award for stupid coaching decisions this year, along with playing Josh Dunkley, a mid, ahead of an actual ruckman who’s in the same 22. I’m sorry couldn’t resist having a shot at my own mob.

But here’s my thought in regards to Nat Fyfe. He didn’t see a lot of midfield minutes and played predominantly forward. I guess I can see potential reasons why this might be the case:

That’s a fair crack. However, that third quarter when the Dockers were mounting a comeback after being behind all day, I would’ve thought the smartest thing you’d do is throw him in the middle for the next five or so minutes to see if you can make something happen here.

But no, Fyfe kept playing forward. The times Fyfe was around the stoppages and centre bounces, Matt De Boer kept him very accountable and didn’t look like doing much. Up forward, the Giants’ defence looked after him pretty comfortably, with Heath Shaw very good.

I also have no time for grub tactics such as pushing him towards the fence, leave that nonsense at Blacktown.

I covered GWS’ game last week and Jake Riccardi would’ve almost been the best Giant on the ground on debut. Unfortunately, he was robbed point blank from a bloke at Brisbane by the name of Starcevich in getting a Rising Star nomination.

Mr. Riccardi’s response in game number two? A bag of four goals, along with another nine marks to back up the 10 he had last week and six score involvements. It’s absolutely beggars belief that the young man from Werribee slipped to pick 51 in last year’s draft. His leading patterns are sublime, his hands are already so imposing for a young lad and most importantly, he can kick it accurately.

So on this, if he’s not named the Rising Star nominee this week, I’ll march to AFL office, restrictions or no restrictions, and overthrow the clowns in charge of naming the nominees.

Oh, and if you’re wondering, he’s not related to Geelong’s Peter Riccardi, who was often seen floating along the wings at Kardinia Park in the late 1990s-2000s.

As much as I would love to fawn over Jake Riccardi, it would be amiss not to give this man the best on ground for this one. He was everywhere for the Giants and the Dockers didn’t give him the respect he deserves as a wingman to sit someone near him at all costs.

31 disposals and nine marks at 84 percent efficiency is a great day out at half back. He also led all Giants in intercepts with nine, highlighting that he can do the defensive running, as well as the offensive. He also recorded three inside 50s, four score involvements and picked up 537 metres gained, which does highlight the want to penetrate and move the football forward.

No Kelly, No Worries

Josh Kelly was on track for another decent return, 11 disposals, five tackles and four inside 50s is a good first half of football. Unfortunately, a stray knee from Shane Mumford on the brink of half time meant that Kelly was ruled out with concussion at the main break.

It mattered not for the Giants. Tim Taranto played his best game since returning from that nasty shoulder injury, recording 25 disposals, five clearances, five inside 50s, seven score involvements and kicking a goal. I’ve been critical of Stephen Coniglio as captain this year, but he had a game that was to be admired and the likes of Jacob Hopper and Harry Perryman stood up in the second half when they needed to.

One of the developing stories in this game was the run-with job Reece Conca did on Toby Greene.

Greene was well held up forward by Brad Sheppard last week before he moved into the middle and did what he liked with the footy. This week saw Greene play more up the ground than forward – fair enough, get out of Riccardi’s way for god sake.

However, he had company in the form of the former Tiger, who must be commended for doing a good negating job. Such a good job, that it enabled Greene to lose his cool and give him a quick shot to the gut in the final quarter. Greene didn’t get a lot of it, only the 14 disposals and didn’t have much impact with the footy, which might indicate the frustrating afternoon he had. However, now this will be in the spotlight for the next couple of days.

He should get off, but given the wrap sheet he has had over the last few years, his fate is in the lap of Michael Christian and his dartboard of penalties.

When we discuss Fremantle’s greatest player in the next 25 years. We’ll probably say Pavlich or Fyfe. Maybe someone like Serong might come into consideration as well when he reaches his prime but that’s going too early.

However, David Mundy should be amongst consideration as one of the best players that has ever walked through the doors at Fremantle. Because at 35 years of age, he still plays in the midfield like he’s a 25 year old ready to reach his prime.

Not only is he such a freakin’ workhorse, but he’s still got the silky skills that he had when he was in his prime all those years ago. 20 disposals, eight tackles, five clearances, three inside 50s and kicked those two goals in the third quarter to get the Dockers back into the contest. How long will he go on? Please go on for another three years David.

I mentioned Brayshaw before having one disposal at quarter time; well, he worked his way back into the game and finished with 24 disposals, five marks, eight tackles, three clearances and three inside 50s – a really good response!

Whilst Fremantle’s forward 50 entries were diabolical – they did just go a smidge above 40 percent – Lachie Keeffe’s job on Matt Taberner, should be commended. Tabs didn’t get anywhere near it after quarter time and a late goal made it a two goal afternoon, which is flattering all things considered.

I’m sensing Lachie Ash will break out and have himself an afternoon out before the season is done – I can just feel it. He had 14 disposals, four marks, three tackles and three intercepts at half back.

Bobby Hill didn’t do much last week, but he did plenty this week. Kicked 2.2 from 13 disposals and also had a pair of clearances and seven score involvements.

Speaking of Hill’s, I’ve been a big Stephen Hill fan from his early days, but today confirmed to me that it is time to give it up. His pace is gone and just struggled to get involved in anything whatsoever.

And on that somewhat depressing note, that brings the review of this one to an end.

The Giants got the job done, they needed to, because the seventh and eighth spots inside the top eight are up for grabs and they’re right in the mix. As a matter of fact, they just jumped my Bulldogs for eighth spot – I’m sure all the fans from Whitten Oval will be impressed, if they weren’t already.

They’re a chance to win their next three to solidify themselves as a top eight chance. Carlton, Adelaide and Melbourne and then a big game against the Saints to close out the season. It’s theirs to lose.

Fremantle well, they’re still two games outside of the eight, but it’ll be a much tougher ask, with games against Richmond, Melbourne, North Melbourne and the Bulldogs to come and none of them will be played in Perth, as they join West Coast up in Queensland to close out the season.

But as long as they continue to persist with the promising kids and show fight, I don’t think Fremantle fans will be too fussed about Finals this year.