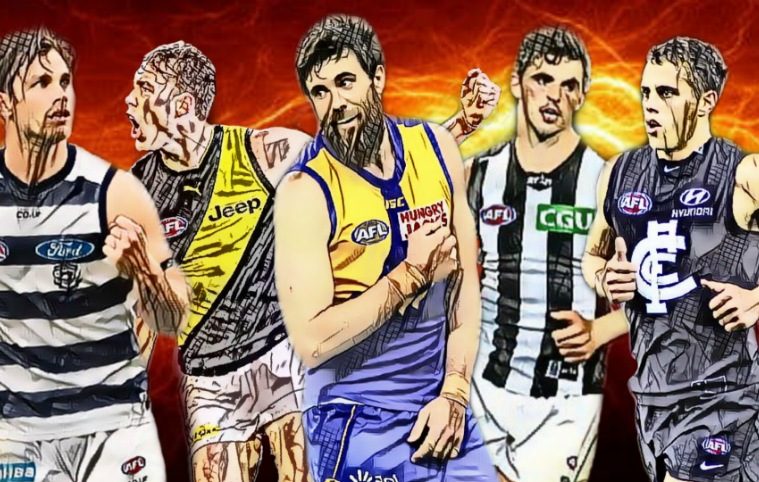 Footy continues for another week in this odd season, with a double-header on Thursday, a couple of teams have a bye, and some gaps of footy at much more practical timeslots where games could be played instead.  I don’t get it, you don’t get it, my fish don’t get it.

Let’s see what else I’m not gonna get this weekend.

Essendon get to welcome back Joe Daniher this week. Is Joe a great player? Not really. Is he going to help Essendon get up the ladder? Probably not. Are Essendon playing him to get some value before he’s traded to Sydney? Likely. It doesn’t matter what you think of him. It’s always good to see players coming back from long-term injuries and getting back on the park.

Now I’ve said that he’ll probably be a late withdrawal.

The Hawks are staring down their fourth loss in a row here, and the club is starting to feel very much in crisis. Essendon is definitely in crisis, but that’s nothing new for them. They’re in a particularly poor position at present and I can’t see where a winner will come from. If there’s some hope for a miraculous Daniher return, it’s that the Hawks are pretty insipid, and they no longer have a back line. So maybe he’ll find some space to recapture his best form from some years back.

I’m going with the Hawks for this one, but not with any confidence.

This is the Thursday night game we’re all interested in. Can the Eagles maintain their Perth form back in the Queensland hub? Or will they return to their struggles from hub version 1. Is a game against the inform Richmond who have very much enjoyed playing in Queensland the best way to test that? A win to the Eagles gives them great confidence, but there’s no shame in a loss against Richmond and as such, a losing result won’t necessarily provide many answers.

Conditions will play a role in this game. Eagles value precision, and the reason they don’t play so well in Queensland is the dewy conditions make precise kicking difficult. Richmond don’t care so much for precision. They enjoy it, but they don’t rely on it. The Tigers are just as happy to make it a scrap.

The biggest question really from this game is what indiscretion will Lynch get away with? I’d be nervous if I was McGovern.

I’m learning towards the conditions and sticking with the Tigers by 11.

The Cats worried me for half a game last week. Perhaps complacency is not below them, either. The Dogs have found their way into the eight and will be eagre to keep their spot.

The Dogs were good last week. They played much better than I think a lot of people expected. And this is their problem – when they want to be, they’re a terrific side. But it doesn’t take a lot to for them to shut up shop completely and go back to their kennel, tail between their legs.

Geelong are just a professional unit. It’s impossible to tip against them at the moment. Hawkins is in such fine form that he should be 15 goals ahead in the Coleman, but he’s too unselfish. They’ve a host of players in everyone’s AA team. Their question isn’t about making the 8, or the 4, or probably even the top 2. It’s a matter of what will they do when they get there?

For now, though, the answer is pretty simple.

Sydney gave us a performance to remember last week. I haven’t seen a team struggle that hard to score since Fremantle was coached by Ross Lyon. They can blame a host of injuries for losing, but to kick 2 goals against a side that is missing 4 of their best 6 backs is pretty inexcusable.

Port will just carry on their merry way here. They’ve lost some momentum the last couple of weeks, but I don’t think they’ll have any issues scoring against Sydney’s defence, which, in fairness, is pretty good. There are just too many avenues to goal for the Power and none for the Swans.

It’s tough to say, but I think the heads at Sydney will be looking at the Dockers improvement from this year and last, and Longmire’s days may be numbered. That style of defence just doesn’t work as well anymore. It’s too easy to defend against.

Speaking of Sydney’s adversaries, the Dockers shouldn’t walk away thinking they’re in top form either. They may have won, but they also have found some scoring concerns in recent weeks. There’s talk of Hogan coming back, though I think it unlikely, but they do need another avenue to goal outside Taberner, especially with Lobb playing like a nervous wreck.

GWS arrived at Perth and realised they’d left their footballing ability in Sydney. They lost to Sydney and didn’t really give a yelp against the Eagles, despite a close-ish game. They have a chance – and a good one – to turn it around this week against the Dockers. GWS should win this game, they’re better around the middle, technically better up forward and have some solid defenders. Freo are ok in all three areas; perhaps very good down back, but they’re still a young, inconsistent side, and you can stop their supply by winning the clearances and keeping Taberner quiet.

If GWS show some determination, they’ll win this game comfortably. But they’ve been going through the motions a bit this week, and it’s becoming a bad trend for them.

I’m going to stick with the men in Orange, but I wouldn’t rule out a Freo victory entirely.

Melbourne don’t really like winning important games of footy. Something has clicked recently with them and they’ve recaptured a bit of their 2018 form, but it’s too infrequently and hardly for long enough in the game.

St Kilda are a beatable side, but they’re also a very capable side. They probably should’ve won last week but didn’t and outside that game and Geelong, they’ve become pretty trustable. Which is disconcerting from a tipping point of view.

Another game in the NT which is terrific. We need more games there, and it is somewhat of an adopted home for Melbourne, which makes me inclined to tip them.

In the battle of Heaven and Hell, I think Heaven has it this time.

Ahh the old rivals. The greatest of rivalries, or so I’m told. With added interest this year, as it’s been a while since either of these teams have been close to each other on the ladder.

And for the first time in a long time, I’m inclined to think Carlton might win it. Carlton seem to be slowly getting it together. They can play some good footy, have their attack somewhere towards effective and are beginning to defend really well. Collingwood, however, are all over the place. Their injuries are mounting, they look very disorganised, they had no idea how to use Cox to their advantage last week, and they just seem bereft of ideas.

So, although Collingwood on paper probably should win this match, I don’t think they will.

Gold Coast have frustrated me recently. They’ve been so good, they’re playing for each other, they’re doing everything right- except winning. They have a good chance to turn that fortune around here because North have been so bad. They have not been playing for each other, they’ve been doing everything wrong- including not winning. Having said that, the Roos have had a pretty tough fixture the last month and might be looking at Gold Coast with a bit of optimism. I think the same, however, would be said of the Suns.

This will be a game for the purists, I’m afraid. Gold Coast have gone a bit cold and will just be playing out of their skin to get a result, at the expense of their structures. The Roos have gone rubbish and I don’t know if they even have a strategy.