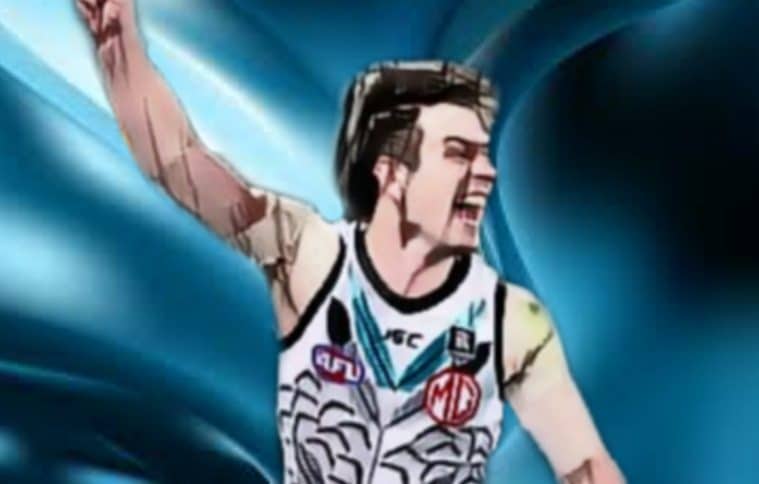 Port Adelaide made hard work of it, grinding out a hard-fought, ten-point victory against Hawthorn, and keeping themselves in top spot as a result. It was Tom Rockliff’s 200th game and the Power got to celebrate in style.

Hawks captain, Ben Stratton also played his 200th game but there was little to celebrate for him as his team fell yet again. It was a special stoppage goal from Zak Butters put the game beyond doubt with two minutes to go.

With plenty of grunt from both sides, it was an evenly-matched for the most part as both teams had to truly fight to find ways to score.

WHERE WAS THE GAME WON?

The game was won with two minutes to go when Zak Butter’s roved a deft ruck tap from Scott Lycett and split the pack to run into an open goal.

Both Port Adelaide and Hawthorn set up well for their respective reasons, the Hawks lined up around the contest looking to clear, the Power more spread out looking to find a little space.

Butters was on the outside with James Worpel his closest opponent, but Port Adelaide’s young star came bursting through at the ruck contest to collect the footy and snag a goal. So fluent was the motion that it seemed as though Butters breezed by and simply collected the footy out of Scott Lycett’s hands. It was a game-breaking play from a game-breaking player. People have been singing Butters’ praises all season and this moment gave a clear indication as to why.

Worpel looked the most frustrated following Butters’ goal. He was the one forced to chase hard when he realised Butters had space to run through the stoppage, but Worpel was initially blocked – not illegally – but by contests around him involving Ollie Wines, Sam Powell-Pepper and Tom Mitchell, and was unable to make any ground on Butters at all.

WHO WERE THE PLAYERS THAT STOOD OUT?

Travis Boak was back to doing what he does best, picking up clearances and distributing to teammates. He had 34 touches in this one, and notched nine clearances as the best midfielder on the park. He continues to produce great footy in the latter stages of his career and whatever he did after the 2018 season to get into shape should be distributed to every player over 30 years old. If you want to prolong your career, look at the work Travis Boak did and make it happen.

Prior to his “I’m going to take on Robbie Gray” blunder late in the game that contributed the Zak Butter’s match-winning goal, Changkuoth Jiath was great off half-back. Jiath was mostly strong and composed when the circumstance permitted him to be, highlighted in the fourth quarter when he intercepted a Travis Boak kick at half-back. He sized up his options and found Ben McEvoy in the middle. McEvoy kicked forward to Daniel Howe and he handballed it off to the running Shaun Burgoyne who kicked the 300th goal of his career from outside 50m. Jiath constantly gave the Hawks some run of half-back, which is something they have sorely lacked in 2020.

After the suspension to Peter Ladhams, Scott Lycett became the lone Power ruckman in this match and he absolutely lived up to the task. Lycett had 17 disposals and five clearances, however he saved his best work for last. In the final quarter, he had nine disposals and four clearances as he took control of stoppages. Whilst many will look at Butters’ moment of brilliance as the reason Port got over the line, Lycett’s hard work at stoppages should not be discounted at all.

Chad Wingard returned to Adelaide Oval for the first time since he left Port Adelaide but made an immediate impact in the first quarter with a goal. Unfortunately, he had just one kick to halftime but made up for it later with his follow-up work with second-efforts and contested possessions, as he picked up another goal from an inboard kick.

Liam Shiels was one of Hawthorn’s best and his ability to use the ball was a highlight – he was one of three players that didn’t turn the ball over. The midfielder was involved around stoppages and drove the ball inside 50, contributing to the scoreboard. His 16 disposals is down on his best but his ball-use is of high importance to the Hawks.

There are not many players who attack the contest harder than Sam Powell-Pepper and in the final quarter, his bullocking work was pretty hard to ignore. Four of his seven touches in the last quarter came via the contest and he also laid four tackles as he threw himself into repeated contests like the bald bull he is.

Tom Mitchell’s last two games have been 30+ disposals and while he didn’t quite get to those heights today with 25 (12 contested) – the equal second-most for the game. Mitchell is always in and under packs and led the Hawks for clearances, helping them attack the forward 50 entries.

WHAT WAS THE MOST IMPORTANT HEAD-TO-HEAD MATCH-UP?

The most critical match-up was between Zak Butters and James Worpel towards the end of the game. Worpel had 26 possessions for the game so certainly did the right things around the ground but it’s that late moment where he allowed Butters to zoom past for the match-winning goal that was most crucial.

Worpel did plenty to hurt Port, but it was Butters who hurt the most.

The ruck battle was also a vitally important match-up for most of the afternoon. Besides the Lycett palm to Butters, the lone Power big man had 12 further hit outs to advantage for the game. Lycett’s immediate opponent, Ben McEvoy perhaps edged him out in the ruck stocks, but not by much. McEvoy had 33 hit outs, with 17 of those to advantage.

However, if we mention ruck taps, we’re only really going to remember one from this game, aren’t we?

WHO SHOULD HAVE STAYED HOME?

Steven Motlop was unsighted for most of the game. After five disposals in the first half, Motlop had just three more for the game, and those were in the final term. Unable to hit the scoreboard, Motlop has kicked just six goals this season and isn’t influencing games with his pace or skill. Port would love a lift from him.

For a lone moment, Changkuoth Jiath would have like to have stayed home, when he tried to take on Robbie Gray in the last quarter. Faking out on any AFL player is difficult at the best of times, but faking out Gray, with the game in the balance – it took some balls. Not the wisest move, but gutsy.

There’s a fine line between bravery and stupidity, though. You don’t bullshit a master bullshitter, and you don’t try to step the master stepper. Learn from that one, young fella.

WHAT COULD HAVE BEEN DONE DIFFERENTLY?

Focusing on the Zak Butters play, a man-on-man approach from the Hawks at the stoppage could’ve prevented that goal. Or perhaps a tighter defensive zone around that stoppage to prevent anyone getting goal side.

On the Power front, they, at times allowed themselves to be drawn too far forward of their Hawks opponents when defending. It enabled some Hawks able to get into space out the back, and then it all came down to the delivery. Port Adelaide were caught on the counter through Hawthorn’s link-up out the back and allowed for the Hawks to get a few easier looks at goal.

WHERE DOES THIS GAME SIT IN TERMS OF BEST/WORST FOR THE SEASON?

It was certainly a close game, one that went down to the wire and could’ve gone either way. Both Port Adelaide and Hawthorn were effective in their transition, and were also able to zone off and intercept as well.

You could argue that the Hawks played above themselves, particularly given recent history, and that the Power were a bit down. I’m not sure whether that discredits the Hawks a little, but it felt as though Port had another gear whereas I am not sure the Hawks did.

WHERE TO NEXT FOR THE POWER?

The Power retain top spot and at this point in this season, even when locked inside the eight, any win is important. The fact it was against the 16th placed Hawks and a small margin is a credit to the Power who knuckled down for a clutch win. The fact that, at times, Port Adelaide seemed the struggle and were forced to come from behind could haunt them against better competition come September and October. Next week they get the 15th placed Sydney and we will see how much the Power can punish opponents they should put away relatively easily.

WHERE TO NEXT FOR THE HAWKS?

The Hawks are enjoying playing the younger guys on their list. Will Day is already looking good in his first season and they’ve still got good players in each area of the ground who have the remainder of the year to show something. The defence is starting to work together, with Changkuoth Jiath, Jack Scrimshaw and Sam Frost joining old heads like Ben Stratton and Shaun Burgoyne who can steady the ship when required. Essendon await Hawthorn next weekend in another chapter, albeit an anticlimactic one, of their rivalry. For some, it will be their first Essendon v Hawthorn game – on both sides. It will be interesting to see how Alastair Clarkson approaches the end of the season and this game in particular.

WILL PORT ADELAIDE BE HEAVILY IMPACTED BY THE SUSPENSIONS OF PETER LADHAMS AND DAN HOUSTON?

This game suggests Port Adelaide can do well without these two important best-22 members of the Power team. Scott Lycett held his own and is more than capable of playing the lone hand in the ruck for the remainder of the home and away season.

Dan Houston is one of the Power’s best and has been playing in defence for several weeks now after looking as though he was becoming a midfielder. His absence is covered by the likes of Hamish Hartlett, Tom Jonas, Tom Clurey and Darcy Byrne-Jones as well as lesser-known players such as Jarrod Lienert and Trent McKenzie.

The backline today halted the impact the Hawks forwards could’ve had with Tom Clurey – one of the best interceptors in the game – back to his best after a nightmare against Tom Hawkins the previous round.

AFTER HALF TIME, HAWTHORN DID NOT RECEIVE A FREE KICK. IS THERE ANYTHING IN THAT?

The free kick count was 12-0 in Port Adelaide’s favour after half time, which could prompt another series of complaints from Alastair Clarkson – he does that when the Hawks lose… However, to say the Hawks were hard done by is possibly a stretch. Hawthorn tried to take on the game and when they did, they were often caught out.

The Power made 61 tackles for the game but with recent comments about holding the ball, the umpires didn’t seem to pay many this game which is perhaps the reason for the lop-sided final count. In the end, Port won the free kick count 20-8.

They had more of the footy and tackled more. If you’re looking for a reason, that’d be it.

Though you have to admit, irrespective of which side of the fence you it, the holding the ball rule is a complete mess at the moment.