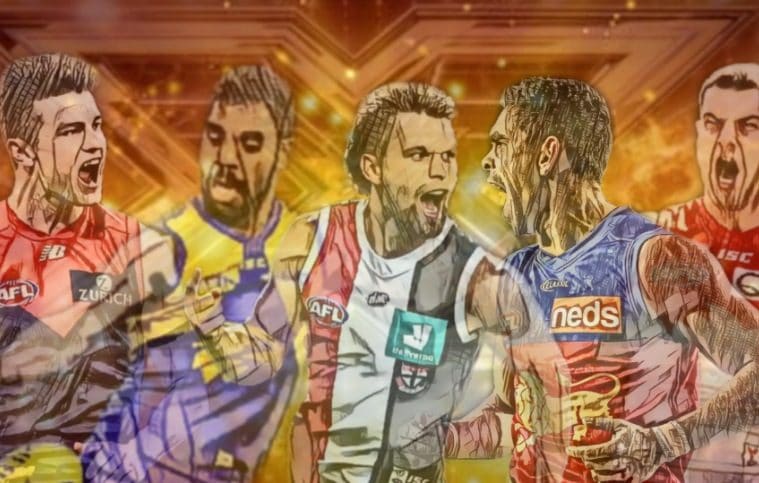 X-Factor Ladder After Round 12

So, after Round Five, as a bloke with far too much time on his hands, I started toying with the idea of a sporadic X-Factor Rankings.

Sporadic inasmuch as I didn’t want to commit to something I knew I was going to struggle to produce on a weekly basis, or even fortnightly basis given everything else on my plate.

However, given I am a creature of chaos at the best of times (the 20 straight days of footy was both wonderful and soul-destroying) I am once again gravitating toward the X-Factor Rankings instead of taking the day to relax at home… while working from home, of course.

So, I have jumped back into this with the feeling of indulging in my guilty pleasure.

Firstly, a bit of a run down for you guys.

The first thing I wanted to ensure was reflected was the ability to kick goals. As such, a player has to average at least a goal per game to qualify for this list. I want you to remember that – THEY HAVE TO HAVE AN AVERAGE OF A GOAL PER GAME TO MAKE THE LIST! In this case, it means no Michael Walters, no Alex Sexton, no Shai Bolton and no Gryan Miers.

Got it? It’s important, particularly if you’re going to complain about a player not being on the list. Make sure they have a goal per game average!

Thirdly, I opted to leave traditional key forwards out of the equation. Ben Brown (who is not even averaging a goal per game this year, anyway), Tom Hawkins, Jeremy Cameron and the like… they don’t get a look in. What we ended up with is group of small to mid-sized forwards and a couple of midfielders who excel at hitting the 50 metre arc and kicking a goal or two.

And finally, at the suggestion of one of our esteemed readers, I added in one-percenters to acknowledge those players that do the little things that are often overlooked.

So, let’s run them down 20-1, with previous ranking in parenthesis.

After a bout of glandular fever earlier in the year, Stephenson has undoubtedly struggled this season.

Hamstring injury has seen him spend more time up forward. Has yet to really dominate a game this season, but even a 75% Fyfe is as good, or better than most players in the comp.

Another who has succumbed to a hamstring injury, Greene was on track to be one of the top performers in the game this season. A Mongrel favourite, his inability to stay on the park the last few years is a concern.

Also, the Giants look toothless without him up forward.

Had some nice moments earlier in the year, but looking his age over the last month of footy.

Still a beast and still working very hard in a dysfunctional North Melbourne forward line, but is one of the pillars the Roos can build on.

Is a low-stats/high-impact player, but I’d like to see him up around 14/15 touches per game.

Creative and damaging, Melksham finds the right spots and is of of the reasons the Dees are finding new life this season.

10.25 touches and 1.5 goals per game over the past four weeks is the role Melbourne has needed from Melksham.

Very quiet over the last couple of weeks after a couple of really good weeks earlier in the season. Plays a tough role playing as the third forward behind Darling and Kennedy, but Allen has maintained his goal-a-game average despite being down on form.

Scraping in at a goal per game, perhaps the biggest under-achiever amongst small forwards this season.

No – scrap that. Luke Breust is that player.

Over the last month, McDonald-Tipungwuti has averaged just seven touches and half a goal per game when the Bombers really needed someone to step up. Of course, with just five marks inside 50 all season, it makes you wonder why the Bombers continually kick it on his head, huh?

He’s so hit and miss. Has managed at least a goal in every game this season, but that is sometimes paired with a disposal count of just five.

Actually, he has had five or less  disposals on four occasions this season and needs to find a way to stay involved even when he is being beaten.

Great start to the season, but injury has set him back and his totals now reflect that. Pulled up short in Round 11 and missed Round 12. Will need to get back pretty soon to have a shot at returning to the top few x-factor players in the league this season.

And just like that, Dusty cracks the top ten with a goal per game.

One of the bright points for the Hawks this season has been the form of Chad Wingard.

Though his goals per game average has taken a hit in the last month (just two goals from his last four games), Wingard continually looks dangerous and with a mooted move into the midfield as early as this weekend, maybe the Hawks can salvage something from their season.

Does it all – is third overall in listed players in score involvements and would probably be quite a bit higher if I counted contested marks as a category we assess for this rankings.

Had a very quiet Round 11, but bounced back with a huge Round 12 where he was the best contested mark player on the field.

He’s such an enigma and still has games where he completely disappears. He had just three touches as the Cats fell over against the Eagles, but bounced back to be one of the best performers on the park against both the Saints and Power in successive weeks.

If he could narrow the gap between his best and worst, he could be the player that gets the Cats over the hump and into the Grand Final this season. But he has a record of poor finals games recently…

Fighting a losing battle as the best forward at Hawthorn, but has had some nice moments along the way.

Has great numbers in marks inside 50 to along with 55 score involvements and 18 goals. Good work on a team going nowhere.

Would be higher up the list if he could stop bleeding right before he is set to have a shot at goal. He has had to go off a couple of times in the last few weeks after doing the hard work to earn a scoring opportunity.

With 16 goals and 19 tackles inside 50, his work in contests has been a highlight for the Dogs this season. And he rarely gets cleanly beaten in one-on-one contests.

His huge start to the season has been tempered with a knee injury in Round 11 that appeared to severely restrict him in Round 12 as well. Took a bit of criticism for his performance as well, so expect him to either take it on board and explode in Round 13, or wallow in his own misery.

6.5 touches and zero goals per game over the last fortnight would indicate a lift is definitely required.

Still right in the mix for the recruit of the year award… which may or may not exist – I’m not sure.

He had his worst outing of the season in Round 11, as Mark O’Connor took responsibility for keeping him to just four touches, but his 28 tackles inside 50 hold him in good stead on this list. He has 28 drag downs inside 50 this year – the next best on this list is 17.

He has rocketed up the list as his performance has mirrored that of the resurgent Demons.

His 24 marks inside 50 are the highest total amongst listed players as he has offered a fantastic option when Weideman and McDonald can’t find the footy. For the latter, that is more often than not.

Still reigning supreme, but is really just one game away from losing the top spot.

Went goalless for the first time in 2020 in Round 12 and, truthfully, has been a bit quiet over the last three weeks. However, his season to date has featured six games with multiple goals.

Well, there you go. Tom Papley continues to make the Swans asking price for him in the last trade period look incredibly reasonable, and is driving up any future asking price in the process. The better he plays, the more likely I reckon he will stay a Swan.

Bayley Fritsch jumped out of the box this time around, leaping 11 places to slot in at second. His main weapon is his marking inside 50. He has beautiful hands and is really starting to flourish as the Dees’ offence gets cooking.

The highest-rated player who has dropped out of contention due to dipping under a goal per game is Lachie Neale. He would have been in seventh spot had he kicked just one more goal. Rules are rules, however.

And that’ll do. It’s not an exact science and hell , I may even be missing someone. I’m sure someone will point that out. One way to guarantee engagement is to make an error! 🙂

Remember, you need a goal per game and not be a key forward to qualify. That said, if you want to know where a player finished, or why a certain player wasn’t included, fire off a question below and I’ll get to you.