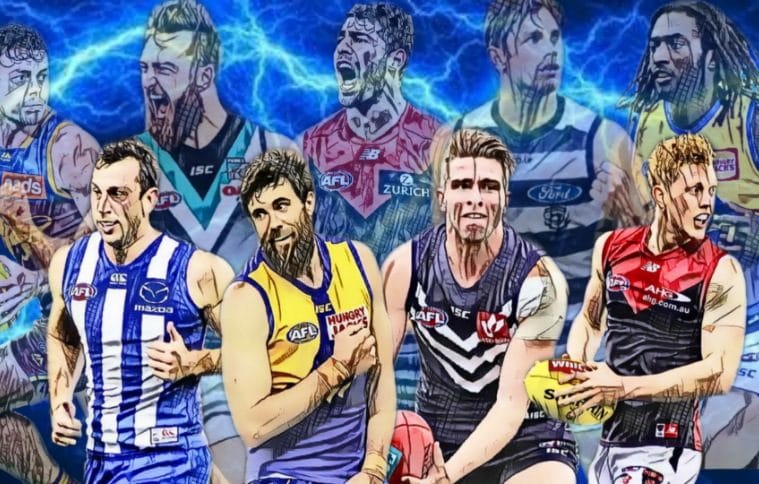 The festival of footy gave us a plethora of football to watch, analyse and dissect, and that’s what we’ve done here at The Mongrel, with an eye to watching the stars of the game across every line over the last four rounds.

Normally, I’d produce an updated Mongrel  50 every two weeks to provide continuity with the season and to track the progress of players as they surge and fall back to the pack, however, with games every day for 20 days it became a bit of a nightmare. I thought I’d hold off until there were a couple of days break in between rounds… and this looks as though it may be the only real chance we get between now and the run home.

With that in mind, allow me to explain a couple of things before we dip into the fourth incarnation of the Mongrel 50.

The difference in this system to just about every other one out there is that it has a distinct bias toward the most recent four weeks of football. There is no hiding it – this system heavily rewards the players who have had big games over the past four weeks. Whilst anything prior to the last four games is not completely discounted, it does incur a penalty of 50%.

The reasoning behind this is that it allows players who are surging, or who have put together three or four weeks of very solid football to blast up the list quickly. It makes for a more fluid ranking system that hopefully reflects players who are playing the best footy right now. Sure, Sam Docherty was killing it in the first four weeks of 2020, but what the hell has he done for me lately?

Yes, the players who were great in Rounds 1-8 are still recognised, but in this case, those who have hit their stride through Rounds 9-12 will be receiving maximum points.

So a good body of work is still important, but blokes who have really started dominating recently will also feature heavily.

Well, I reckon that’s on you.

Our Inner-Circle members have been receiving weekly updates and already know those who have sat at or near the top of the rankings on a weekly basis. They’ve been very good about being quiet about it too, I have to say. Thanks everyone.

Below is the fourth cumulative set of rankings. The premise is that we end up with a list that focuses on the best players on the best teams, and one that can change rapidly. I really love putting this kind of stuff together and genuinely think there is a place for it in footy.

I hope you do as well.

At times you will see me quoting their “scores” as I write about each player.

Anything above 50 in a week would guarantee a top ten finish overall for the week. These are the absolute standout performances.

Anything in the range of 35-50 is a very high-quality game.

And 20-35 points is pretty damn good too. So if you’re averaging above 30 points for any period of time, it bodes very well. I’ve thrown in the player averages over the past four weeks as well as their season averages to date to give an indication as to why some players have seemingly come from nowhere into prominent places in the rankings.

Let’s get stuck in.

There are two players averaging over 40 points per game for the last four weeks, which is a huge achievement. The only other players to do this were Lachie Neale through the first four rounds of the season, when he hit 44.25 per week, and Sam Docherty over the same timeframe who topped the table at 45.75.

Hawkins’ four week average of 47.25 is phenomenal, underpinned by his huge Round 12 score.

Luke Ryan was slow out of the gates this season, picking up zero points in three of the first four weeks of the season, but his form since has been phenomenal, averaging 34.12 points since then.

In order for a player to maintain their place – someone like Nic Nat for instance, they have to perform well in an ongoing capacity. He scored poorly in the first four rounds, but he did score. Plenty did not. In Rounds 5-8 he went from averaging 14.5 points per week to 32.5, and over rounds 9-12, he hit 33.25. He is doing all the right things and hitting all the right statistical markers to maintain his place and has been a mainstay in the top ten in the last three Mongrel 50 releases.

I’m sure you have plenty of your own, so I will try to knock a few over before we start. For context, Lachie Neale is averaging 36.75 points per game in this system, with just one scoreless week. He is the yardstick and is demonstrating the kind of consistency that will be hard to catch.

Whilst this system recognises those playing well in the recent four weeks, it also gives credit to those who have a strong body of work behind them, and that is Lachie Neale… on both accounts, actually.

WHO ARE THE BIG NAMES MISSING?

Plenty of the big names have made significant moves since last time, with Dangerfield, Cripps, Dusty, Fyfe, Mitchell and Bont all joining us in the top fifty.

BUT JORDAN RIDLEY IS SO LOW?

He has been pretty consistent this season, but he has just missed the stat cut-off several times. His best week was Round 11 but he failed to garner any points in the Bombers’ loss to the Saints this week.

HAS ROWAN MARSHALL BEEN THAT GOOD?

He’s in 15th this time round and is doing plenty to pick up points in tandem with Paddy Ryder. Over the past five weeks, he is averaging 31.6 points per game. Going along nicely, the big fella.

WHO’S KNOCKING ON THE DOOR?

Okay, I’ll give you four players at random out of the next ten – Ollie Wines, Andrew Gaff, Zak Butters and Luke McDonald.

A bit of work to do for those fellas, but the beauty of this system is that it only takes two weeks to really start turning it all around.

So that will do me – if you like this kind of thing, I give weekly updates for our Inner Circle Members and that is linked below. It equates to 80c per day and you also get our defenders weekly ranking, wingmen weekly ranking and fortnightly x-factor rankings as well. If you prefer the free content, that’s cool, but these are the kinds of initiatives membership helps pay for.

Sincere thanks to all our members and those who support us. It is genuinely appreciated.

Now, onto the weekly update for our Inner Circle Members. Huge thanks to those guys for believing in us and helping us grow.