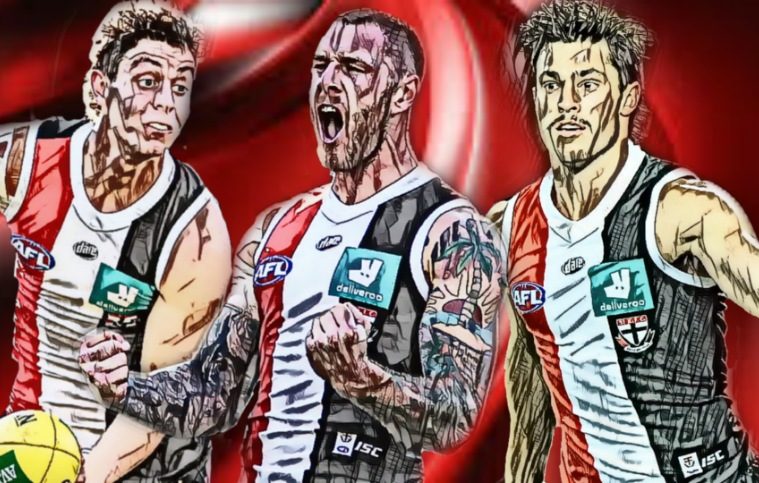 This was a big game for both St. Kilda and Essendon. The Saints were handed an absolute lesson by Geelong last Monday – they were flat and lifeless pretty much from start to end. The Bombers have two opportunities – one against GWS and one against Gold Coast – that saw a win elude them in the final minutes.

However, we found out that the Saints – despite being susceptible to the odd poor performance this year – don’t have two bad games in a row. They set the tone in the first half with a clinical performance, and continued to press claims for a top four spot as we begin to approach the business end.

Meanwhile the Bombers, well to put it plain and simple, they were just utterly crap – and that’s being polite to be quite honest. They did fight harder in the second half but the damage was done at half time, and if you’re a Bombers fan, the run home isn’t looking any better.

With all that said, let’s try and break down the game.

Both Max and his twin brother Ben up on the Gold Coast are going to be very special players. Big Max didn’t get a chance to showcase his talents last year as he recovered from a knee injury and then re-injured it as he was pushing towards to a debut towards the end of last year. But football fans are better off for it.

He started the game like a bloody house on fire, kicking the first two goals of the match, and should’ve had three to his name before quarter time. He moves so swiftly and for a 200+ centimetre player, and he’s quite handy at ground level. He would finish up with three goals, taking his season tally to 18.5 for year.

Keeping him fit and on the park would’ve been St. Kilda’s number one focus this season. Everything else that goes with it is an added bonus.

Tim Kelly aside, Bradley Hill’s move from Fremantle back to Victoria was perhaps the highest-profile player movement at the end of the 2019 season. But since then, he has been playing for way, WAY under than the contract he signed for – and everyone was making notes of it. Last week against Geelong he had seven touches. In the Saints’ capitulation job against Freo, he had 11 and had eight disposals against Carlton. This is how bad he has been.

However, this was arguably one of his better games. My god, he needed it, because another poor game would’ve had every journalist (me included) banging down Brett Ratten’s door and asking when Bradley is going to go to the dreaded scratch match circuit.

He had 17 disposals, four inside 50s, six marks. It may not sound like it jumps out of the page, but there were a lot of times, particularly in the first half when the Saints had the game on their terms. He was running, taking the game off and generating some scoring opportunities. Exactly what the Saints brought him to do.

I’ve been a big fan of Coffield since pre-draft, I’ve always considered him to be one of those players that could easily give you plenty of drive off half back. After a rough couple of seasons that have seen him in and out of the team, he’s finally starting to come into his own. The one thing that has stood out for me this year is his ability to intercept. 19 disposals, 10 marks, seven intercepts and four rebound 50s.

I was asked by one of my friends/co-hosts on my podcast (A3 Footy Podcast on Spotify/iTunes for the shameless plug) post-game whether or not Coffield is the best intercept player this season? Personally, I don’t think so, but there is so much scope for him to be considered as one of the best rebounding/intercepts in the league.

As a Dogs supporter, I can’t stand the Saints, but there are players in every side that I would take in a heartbeat. Josh Battle would be one of a handful of Saints I love watching.

Versatility is everything in football these days and Battle brings it in spades. Initially drafted as a key forward, he’s spent plenty of time down back over the last year and a bit and has been such a capable intercept marking tall. But whenever he floats forward, he looks every bit of that key forward that the Saints hoped he would be when they picked him back in 2016.

He spent time everywhere in this game, including the wing, and had himself 18 disposals, nine marks, seven intercepts and kicked a goal as well. He’s a fine player indeed.

Don’t let the stats fool you, and we’ll get to the Bombers shortly, but the stat that stands out St. Kilda’s contested possession count. The Saints had 17 more than Essendon and it would almost be indicative of how they outworked the Bombers around the ground and in the contests that needed to be won.

Jack Steele is a real man’s man, and every week he puts his head down and works hard for the good of the Saints, but not before he makes himself a glass of freshly-squeezed orange juice and shaves his face. Another 13 contested possessions to go with his 21 disposals and six clearances.

And Zak Jones, I think he’s in the discussion of the best recruit of 2020. The former Swan has shown his best football as both an inside and out midfielder. 26 disposals, 11 of those contested, as well as four clearances, five tackles and four inside 50s.

In the first half, the Bombers looked more hell bent on handballing their way up the ground and that sold them into more trouble than it did solve the issues. Their half-time stat-line read that they almost had as many handballs as kicks, whereas St. Kilda were playing a more direct brand of footy, kicking way more than they were handballing.

It gets worse for the Bomber supporters. After half-time, they actually took the game on through the corridor and looked pretty decent doing it. Unfortunately it stopped midway through the third term as St. Kilda’s press completely suffocated Essendon to the point where they were chipping it around their defensive half for what felt like an eternity.

Full credit to St. Kilda for their defensive press, but the way they were moving the ball actually put me to sleep.

… WHICH LEADS ME TO THE ESSENDON FORWARD STRUCTURE

What the hell is it? What is it do they actually do forward of centre?

Well if you have any answers, ring in to me, because I’m stumped. Efficiency inside 50 for the Bombers was running at a smidge under 21 percent. Just to add salt to the wound, they actually went inside 50 six more times than the Saints – 43 inside 50s for five goals is deplorable football.

Yes they didn’t have Joe Daniher, Jake Stringer, Orazio Fantasia in the team. But let’s look at the forwards they did have. Jacob Townsend – six touches. Josh Begley – five touches. James Stewart played well against the Gold Coast on Wednesday – five touches and Anthony McDonald-Tipungwuti kept having the ball deliver to him as if he was Max King – he’s a god damn small forward, stop kicking it on top of his head for crying out loud.

And Shaun McKernan, I pray for the Essendon fans that Joe comes back and re-commits to the club beyond 2020, because this man will be shown the door by Ben Rutten post-season. Four disposals and looked like he couldn’t be stuffed.

Actually one more thing, get Conor McKenna to stop with those shitty little dinky kicks he does to himself every time he runs with the footy, or piss him off back to Ireland.

ANY GOOD SIGNS FROM ESSENDON?

Okay, I feel like I’ve potted the Bombers, so let’s find some positives about them.

Jordan Ridley has been in amazing touch for them all season and Sunday probably wasn’t his best game this year, but he was far from disgraced.– 18 disposals, seven marks and three intercepts – been one of a few bright spots in what is turning into a dim season for the Dons.

Not sure about McGrath’s game –  16 of his 23 disposals were handballs. He worked hard, no doubt, but like plenty of midfielders, he’s more efficient when he’s kicking it. Out of Merrett’s 24 disposals, 17 of them were kicks and had seven inside 50s, four score involvements and five intercepts. McGrath had only two inside 50 entries.

I must also mention Kyle Langford. For the past couple of years, he looks like an ‘Almost’ kind of player. Meaning that he seems to have good games, but then follow up with performances akin to a disappearing act. But he’s stringing together a nice patch of form as a forward. Six goals from his last three games and added another one late in this one. He also had 18 disposals, four marks and three tackles.

And on that positive note, that brings this week’s review to an end.

The Saints have a massive test ahead of them in the form of Brisbane at the Gabba next Sunday. They wouldn’t want a repeat of what happened against Geelong. At their best, the Saints are almost as good as any team in this league. It’s all about bridging the gap between their best and worst, because it’s still too wide for mine.

Essendon play Richmond next Saturday in the annual ‘Dreamtime’ game, but it’s looking more of a nightmare every week. They still have to play West Coast, Geelong and Port Adelaide before the season is done. It seems as though there’s going to be more pain on the way if you’re a Bombers fan.