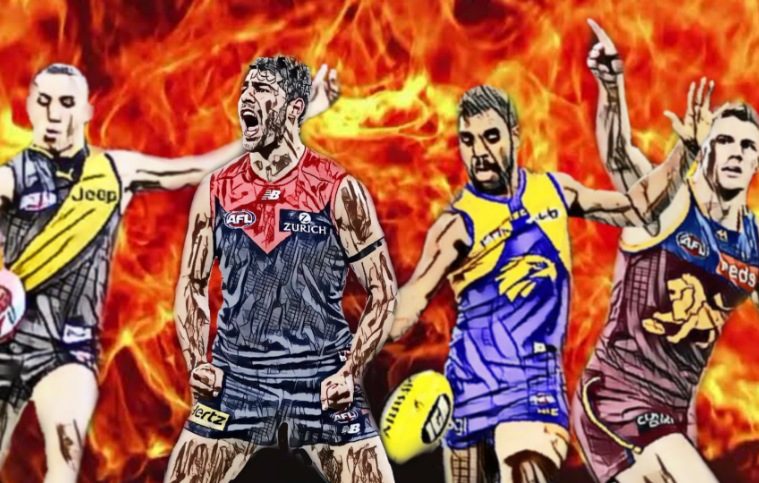 Let’s just pretend I wrote them, and they were hilarious, and every tip was good.

Yup the New South Welsh sides decided to have their Darby in Perth, so we’re calling it the Derby as it should be pronounced. In fact, it’s pretty close to a bridge this time, so we can call it the “Battle of the Matagarup Bridge.” It’s odd they’ve waited until Perth to play each other, given they easily could have at home, but the AFL moves in mysterious ways, and in fairness to the Swans, Optus oval is a lot closer to actual Swans than the SCG.

It doesn’t really matter what you call it, or where it’s played. It’s still worth 4 points and the Giants have their name all over it.

This is a great chance to see where two premiership contenders genuinely sit. Geelong are four games into their five games in 20-day mega marathon they somehow wound up with, and this one is up there with the toughest. It’s a harsh draw, with consistent five-day breaks and travel, they must be wondering what they did wrong and Richmond did right to manage a nine-day break amongst all this mayhem.

Port Adelaide are going along on their merry way. Their win over Richmond showed that they can beat the best, but they still haven’t beaten anyone higher than them on the ladder, so that’s perhaps worrying.

I reckon the cats are going to run out of legs eventually, but just quietly, how good is Tom Hawkins. Leading the Coleman and in the top 5 of assists. Could easily have the medal around his neck now if he played selfishly like a good forward should.

But that’s enough good about the Cats. I think the Power win this. There’s just something X-factor-y about them this year.

I’d be starting to get a bit worried about the surface at Metricon. It’s had a fair amount of footy played on it recently and it’s pretty humid up there. I’m sure we can trust Queenslanders to maintain a football field.

It can’t really be that hard can it?

Back to the footy. Not to sure what to write about this game. North have a pretty good chance of winning this game, but they’re going to need to score at least ten goals which they haven’t done for a while, well not against an actual AFL side anyway.

Brisbane are a great AFL side, but they have one error that needs address- their accuracy. Still, this week they’ll get plenty of chances and if they want to score 2.45 then they probably can. North won’t catch that in a hurry.

Collingwood strung some wins on the trot and weren’t they happy. I hate to crash them back to Earth but they did beat two of the worst sides in the competition. Still, you can only beat whoever is in front of you, and teams have gained a lot more confidence from much worse results, so anything is possible here.

What makes it more possible is Melbourne still can’t decide whether they want to be on the footy field or in the mountains skiing. They have plenty of form against not great sides but then can’t replicate that with any confidence against a decent side.

The big question over Collingwood then might just be how Melbourne treat them. If Collingwood win then perhaps they are a decent side. If Melbourne win, then the Pies may as well just go home. At least then Eddie might stop talking.

Freo have been the talk of the town a bit this week, as they’ve started to look like a watchable footy side for the first time since 1996. There’s a bit of optimism around the joint but that will come crumbling down should they lose to Carlton. Realistically, they haven’t done much different the last couple of weeks compared to the rest of the year. They’re just not being beaten in short bursts of lapsed concentration.

Carlton have also been very good this year, but they seem to have taken the mantra of being competitive until letting the opposition kick 4 or 5 in a row. Fortunately for them, Freo still can’t seem to kick for or 5 in a row, so if they give up that momentum this week, they won’t be so harshly penalised. This could be a genuinely good match, or it could be a rubbish display as two up and coming young sides make continuous rookie mistakes. Who knows?

Carlton are favourites, which I’m not sure I agree with, but several thousand people can’t be wrong, can they?

I think Adelaide need to look back to the 90s and gain some inspiration. If they can find a way to absorb the ability of 22 of the better AFL players in the comp via a magical football, then they might actually turn into a good side. They’ll still lose on the final siren, though.

I do not know what is wrong with this football club. On the bright side, they have 7 players with fewer than ten games to their name, so they’re definitely blooding new talent, but the concerning thing is that none of their young talent seems to be standing out. The Gold Coast as Rankine and Rowell, Freo as Serong and Young, St Kilda have King. Adelaide have had more debutants than anyone else, but none have really been spoken about as the next best thing. Ross Lyon had a handy little conversation about rebuilding on channel 9, the other night, comparing football clubs to elephant herds: if you take the older elephants away from the younger ones, the little elephants don’t learn how to elephant. It sounded better when he said it, but who are the elephants at Adelaide? I think they may have all left.

Anyway I’m rambling a bit because there’s no point talking about their chances this weekend. They have none.

Oh Essendon. You bring me so much joy. I say nice things and you lose, a say mean things and you win, I say nothing and it’s a tie. You really are an absurd football club. There’s a chance here against St Kilda, this weekend because St Kilda apparently forgot that they were good this year when they lined up last week. But outside that game, they have been a genuinely good side this year. They probably just lack a bit of defensive run to their game, and certainly don’t like it when their opposition gets a run on.

You’ve gotta give me something Essendon. You’re in ninth place and the season is slipping away. three losses, a draw and a near loss to an amateur side is not the makings of good form.  Can you turn it around this week?

The Hawks were good when they played, as they called, unsociable footy. But they traded that for a late fourth round and have developed passenger footy instead. The notion that if you just rock up and not try very hard, the fact different key players in the same colours had a sporting dynasty 6 years ago should be enough to get you over the line.

The Eagles will just keep Eagling. Sure, they may have got the occasional lucky free kick last weekend, but they were very good in that second half. I think it comes from being really good at not allowing themselves to get pinged with the ball in their defensive 50. It could also just be that they’re a top side putting on some top performances. But that’s much less fun.

The only thing that stops this being a light training drill for the Eagles is the weather. It’s rained more in the last month in Perth during football games then It has in the past decade. I blame the Victorians- you clearly brought the weather with you. Still, the magical weather-people at the Eagles who can apparently pause the rain for a half of footy might just come out again.

If they don’t and it rains from siren to siren, then the Hawks are invited back into the contest because the Eagles don’t like the rain. The Hawks, however, are going to have to stop playing bruise-free footy.

It won’t rain. It probably won’t matter if it does.

Richmond are back after their 9-day holiday to take on the Gold Coast who now have everyone’s favourite fast food worker running the bench. I unfortunately missed the draw between the Suns and the Bombers, and all I got was that Rankine tried to kick a difficult goal rather than risk a turnover- which is always good play even if it doesn’t work, and memes. Lots and lots of memes. I think Matt Rowell might just be everyone’s favourite player- even when he is writing love notes or counting the days since Essendon won a final in his little red book.

However, the young author isn’t where he’s best suited and the Gold Coast Suns aren’t in the best vein of form they showed earlier in the year. They’re also up against a Richmond side who are looking very scary again and it’s not just Martin’s haircut. A loss to Port was somewhere between an aberration and a sign of Port’s quality. Suns don’t have that same quality. Not even with Ronald McDonald ordering them from the sidelines.