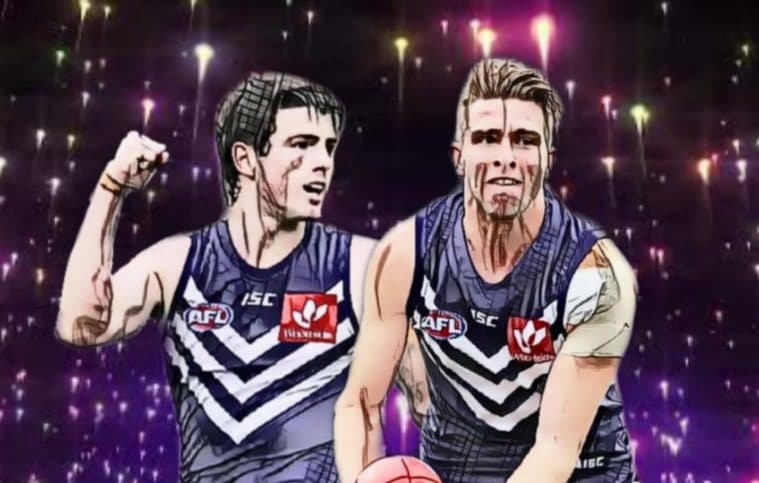 Hawthorn has been the bogey side of Fremantle’s, winning all bar eight match-ups since 1995. They’d had the wood over the Dockers in recent years, so much so, that seeing the colours brown and gold would cause any Freo fan concern. The Dockers had won only two games in the last decade, as Clarkson’s possession game comfortably beat Lyon’s territory game style.

But this is a new Fremantle side. A young, enthusiastic team with an up and coming coach who’s taught them the same possession game as the Hawks. It was the old dynasty versus the next gen. If was a betting man, I’d have placed all my money on the Hawks.

It’s a good thing I’m not a betting man.

The Hawks were outplayed on the park and outcoached by Longmuir all evening. Freo were first to the ball and their depleted defence had answers to every Hawthorn attack. It was a game controlled largely by the back six of each side, but Fremantle moved the ball with precision through an organised forward structure, and Hawthorn were often forced to hack kick it into a forward set up where no one was capable of taking a mark.

If you’d told me Lyon was coaching the Hawks, and Clarkson the Dockers, I’d have believed it.

The Dockers dominated possession. At quarter time, 11 Fremantle players had the ball as much or more than any Hawk, with Worpell and Mitchell leading the way for Hawthorn on just five touches. Mitchell managed to finish the game with 32 touches, behind only Brayshaw (33), but he had few friends, and there were another nine Freo players on the list of ball-winners before the next Hawk.

Here are some important points:

Speaking of Tom Mitchell. He was a lone soldier in a weakened army. His numbers were impressive, but his impact was limited by the fact he had no decent outside runners to distribute the ball to, and when he could find a target, the ball was then butchered and turned over.

Those he could find – O’Meara looks a million bucks but played like a first-year rookie, often hacking the football forward with no real direction. At one point he broke from the centre and streamed forward, only to bob it up to a contest 25 metres out which was promptly turned over. Issues like this are compounded by forwards who get two hands to the footy, yet continually allow it to drop out of their hands.

Tom Scully looked fumbly and uncertain at times, in a similar vein to that of Frederick of the Dockers. The difference is, Frederick is three games into his career, Scully is not. He is playing like a man who doubts his own skills.

Another lone soldier for the night. He battled hard down back and managed his way forward for a terrific grab and goal in the fourth quarter. But it was too little, too late by then.

Clarkson took way too long to release the shackles. The Hawks played a stagnant, defensive game for three quarters which limited Freo’s scoring but didn’t add to their own tally. The shackles were released in the last quarter but by that stage they needed four goals to win when they had only kicked three until that point. A difficult equation for any side. Clarkson isn’t teaching a new game style to a young group. He’s trying to steal a flag with the decaying ruins of a former dynasty, and it isn’t working. He lacks the Hodge-type player down back, and Sam Mitchell in the middle. They’ve traded hard, but it might be time to look to the draft.

Remember these three because you’ll be hearing their names for a long time to come. Serong played his third quality game in a row, looking very much a player beyond his years. Brayshaw has broken out this year and is now controlling the engine room of the Dockers. Cerra is Pendlebury like with the ball: classy and composed. And tonight, all of that was on show. If they stay together, these three could be the makings of the next top tier midfield.

Some will come knocking about the availability of these players over the next couple of season, but these three are the future of the Fremantle Football Club and they appear ready to take the reins way ahead of schedule. With their development, Nat Fyfe is released forward and opportunities open up in terms of what that can produce.

Numbers can be quite misleading. Above, I wrote about Tom Mitchell’s 32 touches. he is a wonderful player and his comeback from that horrific broken leg is gaining momentum now, but how did those numbers stack up against Brayshaw’s game, or the 26 touches of Cerra on the outside? If we’re looking at quality over quantity, the Freo youngsters had it all over the veteran Hawk.

Speaking of classy and composed. In the twilight of his career, Mundy continues to show he still has it. Unlike his opponent at stoppages – Mitchell, Mundy’s little handballs from the middle of the pack found their way into good hands.

He did the dirty work to enable the rest to look so clean.

Much has been written and said of Freo’s depleted back six. With Pearce, Hamling and Logue all missing through injury, much has been left up to Ryan and he’s had few friends down there. However, this has changed the last fortnight and in particular today.

Brennan Cox looks very much a leader down there, holding the lot together; Wilson found some form both defensively and offensively that he hasn’t shown nearly often enough in Purple; Hughes continued to impress in his career-best year; and Luke Ryan is definitely in the conversation of All Australian selectors.

With every game, the selection of Luke Ryan in the AFL’s team of the year becomes more and more likely. With 21 touches and another seven rebound fifty disposals, he is putting his stamp not only on this defence and this team, but on the competition.

Ultimately, the game was won by desire. The youthful Dockers just had more run and muscle than their experienced adversaries. The Hawks at times looked rattled and at other times looked almost disinterested. If not for some good defensive work by Clarkson’s men, and some missed chances by Freo, the 16-point margin could – and perhaps should – have at least been doubled.

It was a game played mainly between the arcs, and Freo dominated that area of the ground for most of the game. Concerning, still, for the Hawks, as much as Fremantle dominated possession- 380-284, they also won the tackle count. And a good way to see if a team has performed badly, it’s the combination of those two stats. If you’re not winning the ball, you should be tackling harder to try and cause turnovers. In this, the apprentice taught the master a lesson.

WHERE TO FROM HERE?

Freo move up the ladder, and suddenly find themselves only a win and a bit out of the 8. With Carlton and Sydney to come, they may be looking a little more aspirational then they were a few weeks ago. Is it a bridge too far?

Hawthorn need to decide what to make of this season. Do they keep meandering on, trying to snare wins, or is it time to signify great change? Do they make some bold moves at the selection table? Maybe try a few different things to develop Clarkson’s plan for the future. Because what he is doing now just isn’t working.

An entertaining game of footy. A personal highlight was 20,000 Freo fans yelling at Matt Taberner to stop, after an uncontested mark in the first quarter – not wanting a repeat of his Derby mistake. To his credit, he listened.