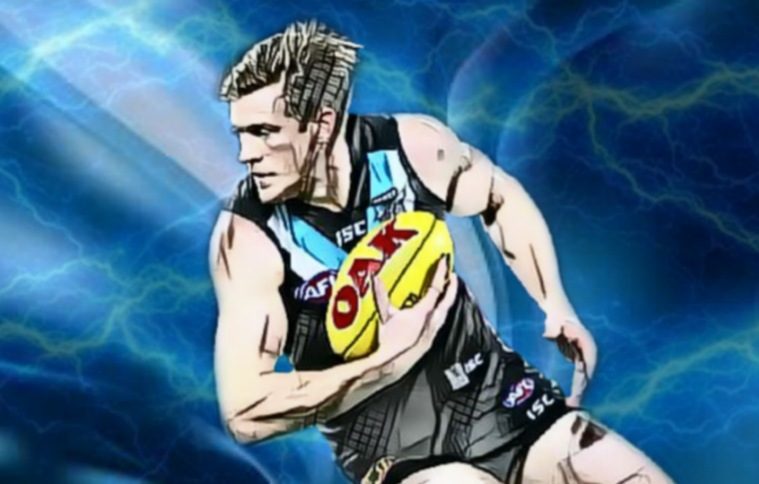 A Tale Of One Captain

After a year sharing the load with Ollie Wines, Port Adelaide made the right call in its 150th season and went back to a tradition that should never have been compromised in the first place. And with a sole captain leading the team, the Power have stormed to the top of the AFL ladder with over half the season gone and look set to finish the season in the top four, if not the top two.

This is an assault on the flag – make no mistake. With a coach that was under pressure and a recruiting strategy that was questioned by many in the football media, Port had their backs to the wall heading into 2020. It was time to either stand up, or fade into insignificance.

It is not the Port Adelaide way to fade into insignificance.

Despite their recent failures, Port have maintained an air of confidence. Whether it is in the black, white and teal or the traditional prison bars, the Power have never been content in settling. They have been building, but have hit some snags along the way. Form, injuries and the associated pressure of dropping games has seen them sit middle of the table too often for a team with such a proud history. And in year 150, much was expected. However, no one really expected this.

This hasn’t been the season anyone anticipated at all. With a suspension of games and the threat of the season being cancelled, Port Adelaide have been the team to adapt best. In a year that epitomises the survival of the fittest, Port have stood out as the team to beat in 2020. And with a stirring win over Richmond on the weekend, suddenly even the most jaded in the football world are recognising the potential this team has to go all the way.

At the forefront of this Port Adelaide revival is their captain.

In 2019, the Power had co-captains for the first time in their history. It was not a popular decision amongst Port loyalists. Their club had always had one captain, easily identified by the big number one on his back each and every game. The club opted to move away from that tradition, and they did it for the wrong reasons.

Ollie Wines was appointed captain alongside Jonas last season in a move obviously designed to entice the young star to remain at the club. Some men accept responsibility in their stride, whilst others have it thrust upon them. For some, leading comes naturally; they know people and understand how to get the best out of them. For others, it is a concept they struggle with.

Whether he was not mature enough to fully embrace the role, or whether he just had a horrid season, Ollie Wines as captain of the club did not work. A water skiing accident before the commencement of the 2019 season set him back, and a raft of injuries throughout the season saw him limp along until Port were put out of their misery, finishing in no-man’s land – tenth.

The experiment of co-captains was a failure. One was not up to the job and that, in turn, compromised the ability of the other to truly lead.

Something needed to be done, and to their credit, Port recognised their error and went about rectifying it.

If you ever needed proof that one captain works at Port Adelaide, the play of Tom Jonas and the team around him in 2020 should be all you require. Not only the defensive general, Jonas is a commanding presence all over the field as well. After recording 10+ spoils on five occasions over the course of 2019, Jonas has already notched four games where he’s hit that mark in 2020 and despite shorter game time, his intercept work is on par with his 2019 output as well.

He is a leader by example – not just in name, a quiet achiever who is allowing his on-field actions to do the talking. And those actions have been loud.

In addition, Port have had the luxury of Ollie Wines finding the kind of form that made him so highly considered for the captaincy in the first place. His 22 contested touches against quality opposition in Richmond put the football world on notice. Injury, and captaincy free, Wines focus has returned, and after an off-season that did some damage to his reputation, with links to Carlton reportedly made by Wines’ management, Ollie is regaining the trust of his club and his teammates.

Port made the difficult decision to remove Wines as captain, and it has reaped the rewards.

Is Jonas in career-best form? It’s hard to argue otherwise. Unless you’re a stats-driven person, the play of Jonas in defence has been a highlight of the Port Adelaide season. Some may prefer the power and dominance of Charlie Dixon, or the emergence of Zak Butters as the equal to Connor Rozee from the 2018 draft class. Some may even relish that Travis Boak continues to drink from the fountain of youth, but in terms of leadership, Jonas has gone about his job with a quiet confidence that would have the football world talking if he played for one of the “big teams”.

Big or not, Port are building something special in 2020, and they are doing it with a leader that is taking the role in his stride. His incredible defensive efforts against Carlton were just as responsible for their gutsy win as Robbie Gray’s shot from the boundary. It was Jonas crashing into the pack at half-back to drag down a big contested intercept mark to cut the Blues off at the knees and send the Power back forward.

The AFL has had several great leaders in recent years. Like him or not, Joel Selwood has been an incredible captain at Geelong, and the “follow me” style of Trent Cotchin has powered the Richmond team to two of the last three flags. Scott Pendlebury has led Collingwood with class for years, as well, and though he recently stepped down, the quiet confidence of Shannon Hurn was the exact style that West Coast needed. However, in terms of new captains the work of Tom Jonas cannot be denied. The other four have the runs on the board over time, but Jonas is compiling quite an early innings of his own.

As we turn for home in the 2020 season, Port Adelaide find themselves in the box seat. They have played wonderful, powerful and exhilarating football, but are also capable of eking out a dour, defensive win when necessary. They have embraced the chaos and confusion of the 2020 season better than any other club, and in a season where you feel that anything can happen, they could be the team to beat.

In their 150th season, with the captain wearing the number one guernsey, and with eight wins from ten starts, this club is poised better than it has been in recent history. Yes, the form of Charlie Dixon has a lot to do with it. yes, the continues excellence of Travis Boak is a large part. Yes, the return to form of Ollie Wines makes a huge difference, but do not discount the impact of Tom Jonas’ leadership.

Not only is he in All-Australian form, he might just secure the AFL Coaches Association award for the best captain. From the outside looking in, he’d have my vote.

And hey, you know we have memberships here at The Mongrel, right? We are small, we’re independent and we’ve knocked back cash from the gambling industry as I reckon I’d be a massive hypocrite if I complained about all the gambling ads on AFL coverage and then sold out to them. For 40-80c per day you get access to our wingman rankings, defensive rankings, weekly player rankings as well as members-only columns and early access to my Good, Bad and Ugly evening game reviews.