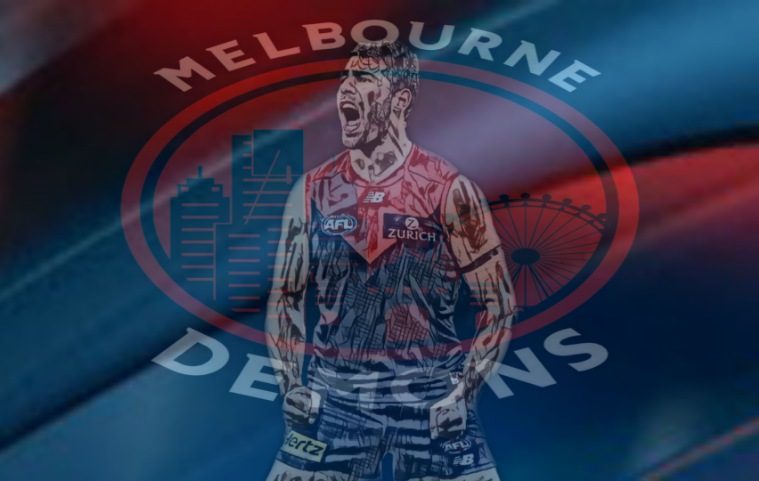 In a season of unusual firsts, Melbourne hosted the Kangaroos at the Adelaide Oval, the first time an AFL match had been played at this venue without either Adelaide or the Power participating. With both teams coming off four-day breaks and Melbourne missing prime movers Gawn and Viney this was thought to be an even money contest, but the Demons put paid to that idea with a resounding 57-point thrashing.

Read on for five talking points that came out of the lead up and the game itself:

With their larger than life captain, Max Gawn and his deputy Jack Viney absent through injury Melbourne were faced with the daunting tough task of finding on-field leadership to replace their impact. While Jake Melksham wore the figurative armband and tossed the coin, coach Simon Goodwin need not have worried as midfield dynamo’s Christian Petracca and Clayton Oliver stood up all night. Petracca, in particular, seemed hell-bent on picking the team up on his back and driving them forward.

North fired several telling shots in the first half, and while Petracca was consistent throughout, he found an ally in backline general Jake Lever who led by example throughout the game, desperately cutting off promising forward thrusts time and again, and setting up aggressive plays with daring inbound disposals. Melbourne’s mature players have probably shied away from the responsibility in recent years, but if tonight’s efforts were any indication, they might have finally started to take the bit between the teeth.

WHAT WOULD LIFE AFTER BEN BROWN LOOK LIKE AT ARDEN ST

Nick Larkey was impressive in the Kangaroos drought breaking rout against Adelaide two rounds ago, then rested with a minor lower leg injury against the Cats. He returned to the side for this winnable game as his more illustrious but horribly out of touch tall forward partner Ben Brown was resting an injured knee. Larkey began brightly matched up against an ill-equipped Adam Tomlinson and duly took advantage, slotting two first quarter goals.

The Demons had obviously done their homework and worked over Larkey physically every chance they had, but the agile Kangaroo kept presenting in the limited opportunities afforded him. He goaled again in the second, and when he booted his fourth at the 17min mark of the third quarter the lead was back to a manageable 10 points. That was to be North’s last major however, in fact after the second minute of the game, Larkey was the only goal scorer for the blue and white.

Larkey has shown he can be a genuine leader of a forward line in the AFL over the past year and a half, which brings an interesting question is the only man who has scored 60+ goals in each of the last three seasons expendable? Onlookers were surprised that Brown and North were unable to come to terms on a contract extension over the off season, and his troubles this year would probably move their perspectives even further apart. So, could the emergence of Larkey open the door for potential suitors for a still capable Brown? I’d seriously listen to any genuine offers – the Kangaroos have a lot of weaknesses to address.

AFL football has long been won or lost in the midfield, and while inconsistent Melbourne have a centreline rotation capable of matching it with the best, the Kangaroos are workmanlike at best, with a few youngsters showing great potential (I acknowledge Cunnington’s continued absence has severely impacted North’s capacity).

Last week Clayton Oliver played a perfect game; this week he was merely very good, collecting 31 disposals, six clearances, eight inside 50s, seven score involvements and a second consecutive week of 500+ metres gained – the young champ is in a rich vein of form.

Angus Brayshaw who returned to some of his 2018 form in the second half last week, started slowly only collecting four touches in the first quarter before exploding in the second and not stopping on the way to twenty-nine touches and a game-high 563 metres gained, becoming increasingly important as a linkman able to find space as Oliver and Petracca ran riot.

Which brings us to Petracca, I mused last week that he and Gawn had a monopoly on the three votes whenever Melbourne won, but without the skipper tonight he may have collected all six on offer, such was his dominance. He finished with 29 quality possessions (seventeen contested), a monster 12 score involvements (he leads the league in average and total of this stat), more spins than you’d see at an audition for the Russian ballet, and his only blemish was two poor set shots on goal. If he could finish better, he’d be Dusty Martin.

Their North Melbourne counterparts meanwhile were similarly prolific in the stat sheet but far less effective in setting up their team for success. Between Dumont, Davies-Uniacke and Simpkin they contributed 814 metres of forward thrust, a whopping 700 metres less than their direct opponents listed above. Dumont was a tireless contributor on the night, his 27 touches supplemented with six tackles and six clearances, indicating workrate was not the issue. Simpkin was down on his production this season, only returning 20 touches, at a lowly 60% efficiency, and only one clearance as the Demons bullied their rivals around the ball.

A Kangaroos hind legs propel it forward while also providing an effective counter-attack weapon in times of need, an AFL team similarly gains much of its impetus from the back but unfortunately this is where North Melbourne’s line-up is most uninspiring. Robbie Tarrant aside, there are no players in that important back six that would generate more than superfluous planning from opposition coaches.

Luke McDonald had a very productive night, collecting a game-high 33 disposals to be one of his team’s best, however too often he moved the ball sideways or wide, a player who gains so much uncontested possession needs to be more creative. Shaun Atley has played 208 matches, and polled Brownlow votes only once, back in 2012. He was shown up by the Demon medium forwards tonight, and if Bailey Fritsch had kicked accurately would’ve had a nightmare. Sam Durdin was quiet with only six touches, Aiden Bonar injured a shoulder late in the third, while Ben McKay was promising with thirteen disposals and two contested marks.

Tarrant was excellent again with 23 disposals, seven intercepts and five marks, but he’ll be 32 next season and Rhyce Shaw is desperately low on an intimidating presence and line breaking imagination behind centre that he’ll need to address before they are to make a sustained move up the ladder. An inexperienced and out of form Melbourne front half took them to the cleaners tonight and they’ll almost certainly face stiffer competition in the coming weeks.

Prospects to get the fans excited, like the Star Wars saga, this is all about Luke, Jackson & Davies-Uniacke in this case. For the winners, their number three draft pick and round 10 NAB Rising Star nominee continued his encouragingly exponential form rise matched against one of the best in the business, Todd Goldstein. Jackson started in the ruck opposed to Majak Daw and didn’t look out of his depth in this role despite not setting the scoreboard alight with only five hit outs. Eleven touches and a solitary mark belied his influence as three strong tackles and repeat efforts in the contest replicated the scouting report that had the Melbourne brains-trust salivating at the thought of calling his name last November. Traditional thinking suggests it takes KPP and ruckman longer to assimilate into senior AFL football, but Jackson has progressed quickly from his early deer in the headlights moments and already looks like he belongs.

North midfielder Davies-Uniacke was a similarly high draft pick and in just 21 matches in his first two years and injury interruptions this year is starting to hit his straps and recording career high numbers in disposals, marks and tackles. 24 touches tonight with ten contested and some genuine presence through the midfield when he directed the ball in-bound to try to attack directly were a small ray of hope for a besieged Rhyce Shaw in a disappointing outing to South Australia.

And lastly to once again acknowledge the brilliance of Christian Petracca, here are five quick strides out of congestion to finish:

While Rhyce Shaw seems to be playing the long game in regard to his team’s development, it has to be noted he appears to be marginalising two of his biggest assets. Shaun Higgins and Todd Goldstein were both played out of position for varying lengths of time tonight. Higgins in particular will never play a less influential 27-touch game than he did out wide on the wing tonight. Too often Goldstein found himself linking up a series of handballs rather than competing for marks – why wasn’t he rested forward to help Larkey?

Bailey Fritsch, yet another success story from the VFL and Eddie Munster lookalike was the worst offender tonight with two goals four, each of them very gettable and two almost criminal to miss. Angus Brayshaw was another offender not making the distance from 45m on the run on two occasions, while Sam Weidemann ended up with three goals, but could have had five or six himself if he’d kicked straight. Kysaiah Pickett was electric at times, and his pressure, not captured on the stat sheet, directly contributed to the shift in momentum after quarter time, but he also found himself on the wrong side of the ledger with two bad misses.

One day the full story might come out, but until that day comes casual footy fans and professionals alike will just have to scratch their heads. Struggling for opportunity behind a star like Todd Goldstein is a common tale in AFL history, seeking a new start also a regular path taken, but to move from Goldstein’s understudy to Max Gawn’s is one of the more peculiar decisions of recent times. To then not be selected when Gawn was out injured in favour of out-of-form key forward Tom McDonald to take the ruck duties adds another chapter to this curious saga.

Deep in the third quarter with North just holding on, they briefly abandoned the handball at all costs game style that had served them so poorly during the night in favour of a direct central attack. This led to an unmarked Bailey Scott receiving the ball in the centre with clear space ahead, he proceeded to stream inside 50 and instead of taking a shot on goal passed to Nick Larkey on a lead in the pocket, this might’ve been ok except he missed the open target badly, Larkey only able to gather near the boundary and dish to Cam Zurhaar who with three open teammates in front of goal managed to miskick a pass that dribbled through for a behind.

The first quarter saw the Kangas out-possess the Demons 101 to 57, but the turnovers were only 20-18 indicating that Melbourne was significantly down in this aspect early on.

A massive 40 tackles were laid in the frenetic second term, twenty apiece. The game ended with North ahead 52-44.

North led the hit outs 29 to seven, but this only resulted in winning the clearances by four overall.

In the last stanza the dam wall broke which had been threatening since quarter time and Melbourne outplayed their opponents to the tune of 47 disposals, 14 inside 50s and 6.6 to 0.1.