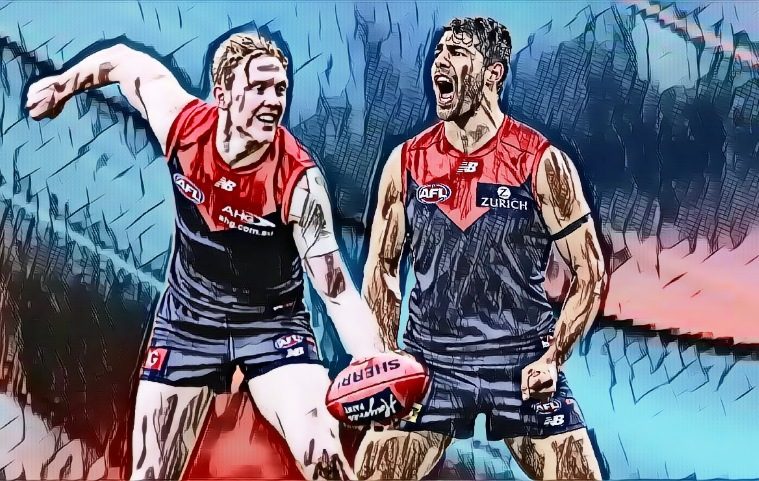 The unusual setting of the second match in a Wednesday night double header saw Melbourne triumphant by 51 points against a flailing Adelaide Crows at Adelaide Oval. If last weekend’s West Coast / Geelong match was a season highpoint, the first half of this game might’ve provided the complete opposite, however a late burst from Melbourne with 7 final quarter goals broke open a previously closely fought contest and gave the struggling red and blue some momentum to move onto next week.

Read on for five talking points that came out of the lead up and the game itself:

Gathering possession has never been a problem for the young Melbourne two-time Bluey Truscott Medallist and 2018 All Australian, however, his disposal in particular a perceived unwillingness to kick the ball has brought questions up over his effectiveness.

Tonight he answered his critics and more in a power packed performance that saw him register 34 disposals (season avg. 25), of which an enormous 22 were contested providing even more substance to his much improved 74% disposal efficiency. He kicked the ball seventeen times tonight up from an 11 average and helping him gain a game-high 515 metres for his team, over 200m more than his regular output. In addition, he contributed 12 clearances, five score involvements, two tackles inside fifty and a last quarter goal in a starring performance that would certainly encourage his beleaguered coach.

COACHES UNDER THE BLOWTORCH

Besieged Adelaide coach Matthew Nicks nine games into a career and still chasing his first win, faced a torrid week in the media and talkback shows after the banana-gate footage from last weekend surfaced. A string of changes to personnel for this match, some forced, but others clearly a message that he will not accept the level of mediocrity not experienced in 30 seasons at West Lakes.

Off only a four-day break after a drubbing at the hands of then 17th placed North Melbourne, the Crows started strongly under the coach’s guidance, applying an outstanding 11 tackles inside their forward 50 in the first term, obliterating their season average of eight for a match in the process. Their play was scrappy at times with the vital pass into the key forwards often misdirected and not able to utilise the presence of young Elliot Himmelberg or the tenacity of Lachlan Murphy. Ultimately, they fell away badly in the last quarter against a fresher and more talented side, but there were some positives in the defensive structure and midfield competitiveness. A complete inability to register a competitive score must be addressed if they are to avoid the dreaded winless season, as this marked the sixth time they had recorded under 46 for the year to date.

Nicks’ Melbourne counterpart was under no less pressure as this make-or-break fixture rolled around, having been given an often-ironic seal of approval from Chairman Glenn Bartlett over the weekend. Regularly criticised for a lack of a functioning game plan, Goodwin’s intentions were clear to move the ball quickly into the forward line and allow his mobile marking players one-on-one opportunities. This proved fruitful in the first quarter, as first rookie Luke Jackson marked at the top of the square, and then maligned Sam Weidemann’s strong second efforts both registered goals. A good example of his commitment to quick and long ball movement, and a major beneficiary of the changed kick in rule saw Steven May prolific out of the backline, particularly in the first half.

The middle two quarters this strategy was countered by disciplined Adelaide defensive structures and poor execution from the Melbourne running players, but sheer weight of numbers turned it back around and the floodgates opened in the last. An encouraging performance, albeit against very poor opposition could see Melbourne still push for finals action and potentially save a very difficult decision for the board.

Melbourne’s meteoric rise in the 2018 season coincided with Angus Brayshaw’s coming of age as an AFL player, and while his ultimate third placing in the Brownlow probably didn’t accurately reflect his standing in the game, there was no doubt he was a talented player going places. Since that time though he has regressed steadily, some well-argued opinions suggesting he could be a trade target last season and barely firing a shot in 2020.

The first half against Adelaide brought about much of the same with only two disposals to his name and a complete blanketing by his direct opponent, Ben Keays who was proving influential for the Crows with 6 clearances. However after half time Brayshaw started to get his hands on the ball and his smooth skills came to the fore in several passages, the best of which ended in a third goal to Weidemann. 15 possessions after the long break including five score involvements should have him feeling better about his future, a midfield of Brayshaw, Viney, Petracca, Oliver and Gawn could be the equal of any in the league.

A remarkable thirteen changes were made for this match across both teams, Adelaide with nine made up of four omissions, including veterans Gibbs, Atkins and Knight and curiously a further four players “managed”, and late withdrawal Brodie Smith with a knee injury. Melbourne meanwhile countered with three players of their own dropped, including the McDonald brothers alongside injured Kysiah Pickett.

The replacement players probably weren’t major contributors on the night for either side bringing into question the need for such drastic action. For Melbourne Bennell snapped a nice goal in the second term but only finished with five touches, Tomlinson was largely anonymous and got monstered a couple of times by Himmelberg, vandenBerg was combative as usual, but Neal-Bullen will find himself nervously waiting for a phone call from Michael Christian after an awful tackle on young Crow Will Hamill saw him out of the game in the opening minutes.

For Adelaide there was similarly little impact, Tom Doedee and Fischer McAsey were good in the air at times down back, while first gamers Lachlan Sholl and Schoenberg showed some exciting signs with ten and twelve disposals respectively. Unfortunately, Taylor Walker and his heir apparent Darcy Fogarty were non-factors with a dismal ten touches and one goal between them, in a team crying out for some forward presence the coach would be most disappointed in these two.

A damning statistic doing the rounds over the past couple of weeks was a list of players in the top 50 possessions winners with the lowest average score involvements per game, in second and third place sat the Crouch brothers Matt and Brad. The opportunity was certainly here tonight for Matt to prove he was more than just an accumulator with Brad, along with skipper Rory Sloane and Brodie Smith all injured, but alas it turned into another game of little substance for the Crow mid.

Twenty-seven touches, and eight tackles speak to a strong work ethic but too often his disposal let him down. Five minutes into the first as both teams tried to impose themselves on the contest Crouch broke free from a scrimmage and instead of driving the ball in fast to his tall forwards he scrubbed a miskick under no pressure out of bounds about 20 metres forward. Again straight after half-time with the score only 7 points apart he worked tirelessly to draw a free kick, only to turn it over to an unmarked Demon defender in a deflating blow to his teammates confidence. The workrate, desire and ability are obviously there, but only a solitary inside 50 suggest opposition teams are unconcerned with his impact and as it proved tonight with Petracca running wide of Crouch and being far more creative and attacking.

And in honour of Clayton Oliver’s inside work, here are five quick hands to finish:

Despite their lowly ladder position according to the betting agencies, Melbourne are in the thick of the Brownlow action with both beanpole Max Gawn and the 2020 shooting star Christian Petracca among the top seven fancies. Featuring strongly in each of their victories to date it’s arguable who has been more influential thus far, however tonight will almost certainly break up the run of 3 & 2 vote quinellas for the two as Oliver is certain to collect the three votes. Petracca improved as the match wore on and led the game in score involvements with eight, tackles inside 50 and forward fifty entries, if he’d converted better than 0.3 he could’ve been in the conversation just below number 13.

The dual All-Australian from  2017 and 2018, and 2018 Malcolm Blight Medallist on a half back flank has found himself in more unfamiliar territory in the centre most weeks this season, and despite relatively sold numbers tonight including 20 disposals and seven tackles doesn’t appear to be the player he was. Interestingly the player who has inherited his spot as a running backman, Luke Brown was excellent again tonight with twenty disposals at an elite 95% efficiency and a team-leading 497 metres gained along with a game-high nine intercept possessions.

Deep in the second quarter a dubious free kick to Melksham for holding in the contest saw Petracca take an advantage that shouldn’t have been there. The ensuing simple kick to a wide open Langdon streaming into goal missed its target badly, however, the Demon still had time and space to collect and waltz in to an unguarded goal, instead he fumbled three times before being caught holding the ball in the goal square in what was a calamitous exclamation mark of a forgettable first half.

The drafted future is now

Luke Jackson pick number 3 faced off against Fischer McAsey pick 6 in the first meeting of the earliest two key position players from the 2019 national draft. With both playing deep inside the Melbourne forward fifty there was some hope they’d be matched up during the night, but alas that shall remain something to look forward to in subsequent meetings.

McAsey lined up alongside Sam Weidemann and despite keeping him to just seven touches, probably lowered his colours due to the Demon’s three goals. The young Adelaide backman though was strong in the air at times, completing four strong marks and driving the ball inside 50 on consecutive occasions in the second quarter.

Jackson meanwhile stood beside Daniel Talia, one of the meanest defenders of the past decade, and in his most promising AFL outing to date showed Melbourne fans why he was regarded so highly as a junior with two impressive goals and two strong contested marks alongside 14 hit outs in a terrific outing.

While this match was certainly not one for the ages, there were some very interesting statistical results arise.

Melbourne’s late dominance possibly explained by a six-day versus just four-day break was illustrated through a 14-4 inside 50 differential in the last quarter.

For a game that suffered from frequent skills errors on both sides delivered exceptionally high contested marks numbers 11-15 overall, both well above their respective season average of 8.3 vs 10.2.

The intent of both teams was showcased by a 19-19 inside 50 tackle count vs a season average of just 9.3. Adelaide in particular came out of the blocks quickly recorded an astounding 11 in the first quarter alone.

After entering the game with the lowest average in the league of 27% for forward fifty efficiency, Melbourne blew that out of the water with 23 scoring shots from their 45 entries at 51% efficiency.

O’Brien out bustled his more decorated opponent Gawn early leading 12 hit outs to six at quarter time, but this was steadily eroded until they stood neck and neck at 21-20 by three quarter time, before the Demons skipper finished ahead 29-26. Coupled with 14 hit outs from the precocious Luke Jackson, Melbourne were able to gain ascendency and ended up easily ahead on clearance numbers as a result.