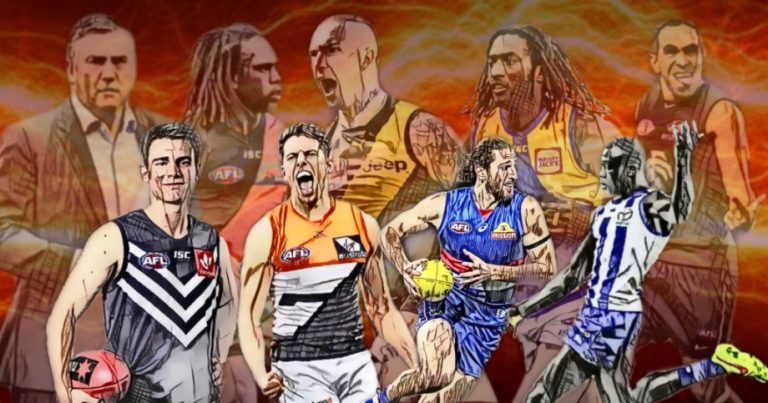 The Winners And Losers Of Round Nine

Well, we’ve rushed our way through another round of footy and whilst some players have stepped up to the plate, others have well and truly stepped down.

With that in mind, here are The Mongrel’s winners and losers of Round Nine.

Gave a reminder that the bloke wearing number four in yellow and black is still one of the most dominant forces in the game.

Carved the Dogs up with power running and meaningful touches, including three goals in a best on ground display.

Has made the transition into one of the best wingmen in the game.

Picked up 25 touches and used the ball well against the Dees, often using superior positioning and harder run to create distance from both Ed Langdon and Angus Brayshaw out wide.

Whilst not back to his absolute best, gave a huge indicator that it’s not too far away.

28 touches and eight tackles were the standouts in his best game of the season to date.

Was found in Anthony McDonald-Tipungwuti’s locker after the game, still giving him the shits.

Answerth had a fantastic lockdown game on one of the most dangerous forwards in the game, prompting his opponent to be moved onto the ball to get a touch.

Brought his own footy to the game and continued what has to be a career-best season for him.

Not taking a tagging role this week, he slotted in at half back and did as he liked, waltzing around the half back line to gather a mammoth 35 touches.

I know many have said it before you read this, but seeing him back out there, and playing at the top level again… you couldn’t help but smile.

He returned modest stats, but that was beside the point. Majak made it back, and it was exactly the story the AFL needed.

Some may not like Derm, thinking he is a bit too knock-about on commentary, etc… but not me. I reckon he is fantastic.

He gave voice to what the return of Majak Daw meant to so many who have had friends or family impacted by suicide. Hearing him talk… I was proud of him. He was my favourite player by a mile, and his “heart and soul” description of what Majak’s return meant was top-shelf stuff.

Playing against his old side, Jones was one of the Saints’ best.

He collected 14 contested touches and kicked a goal as he powered his new team through the middle. Jones is one of the rare players that can be just as effective inside or outside on any given day, and he was at his best in this one.

The man. The myth. And if he continues this kind of play, perhaps… the legend.

Far and away the most influential player on the ground against the Cats; if you at all doubt how much he impacts a game, catch a replay of this clash and marvel at just how food he is.

Came back to haunt his old team in the opening seconds, with a brilliant blast from the middle to set up Josh Kennedy’s first goal.

Kelly was very good against his old team and passed a huge test in helping to guide the Eagles to a huge comeback win. His 23 touches and two direct goal assists made for a stellar outing.

After winning the rising star nomination last week, Caleb Serong was back in the guts for the Dockers this week, giving Fremantle fans a glimpse of what’s to come.

He was integral in steering them to a huge win over the Magpies and looks like a veteran after just six games. He might be the big contender to the Rising Star award that was once all but owned by Matt Rowell.

If you’re wondering where the best place for the Giants to play Josh Kelly is, it’s the wing. Shhhhh, don’t tell Leon Cameron – he sometimes likes to play him elsewhere.

Josh Kelly has payed as the designated wingman five times this season. In those games he has averaged 25.2 and the Giants are 4-1. Keep him there.

We’re not Fox Sports. We’re not going after the fringe bloke in Gowers. The bloke who wrote the supercoach column about him probably deserves to be in here.

Bont is the star, and whilst you had Dusty starring for the Tigers, Marcus Bontempelli was gather 15 touches and missing set shots. Not good enough.

Now playing on the wing and looks lost at sea. What has happened here?

Was a monster in 2018 and looks a shadow of that player now. 11 touches in a belting.

A very quiet outing for Eddie, and the Blues really could have used a bit of what he can provide.

Sadly for Eddie, when you get lauded for the ups, you’ve gotta get whacked for the downs. Some may point out he recorded six tackles. That’s fine – I would have preferred he got his hands on the footy and did something with it.

Smashed by Noah Answerth in the first half, returning stats of zero disposals and one tackle.

Gets a free pass too often in games where he goes completely missing.

Came back into the Adelaide side and was there to provide veteran leadership in the absence of Sloane, Walker and Doedee.

Offered nothing of the sort. Looks well and truly over playing footy.

Something’s up here. He looked fantastic last year and has fallen in a heap in 2020.

Blakey is averaging eight disposals and less than half a goal per game in a season many expected him to make a leap. He has… backwards.

Never the biggest accumulator, he was blanketed by Brad Sheppard to the point you could have forgotten he was playing.

Ratugolea is a great athlete, but after his two costly turnovers at crucial points (both burning poor old Charlie Constable), I am afraid he may never be a great footballer.

Here ya go, AFL coaches. I’ll give you this one for free. Stop Whitfield and stop Josh Kelly… you stop the Giants.

Stewie must not have been paying attention. Not sure I saw a defensive runner with either all day.

“If anyone transgresses, you’re on the plane home.”

They were your words… I guess it only applies to people from other teams who transgress, right? Sometimes it’s just unwise to state an opinion just for the sake of stating one.

Got any of your own you’d like to add. The comment section is just a small scroll below, or you can hit us up on our socials. We’re good like that.

Ten Things I Learnt After Round Nine