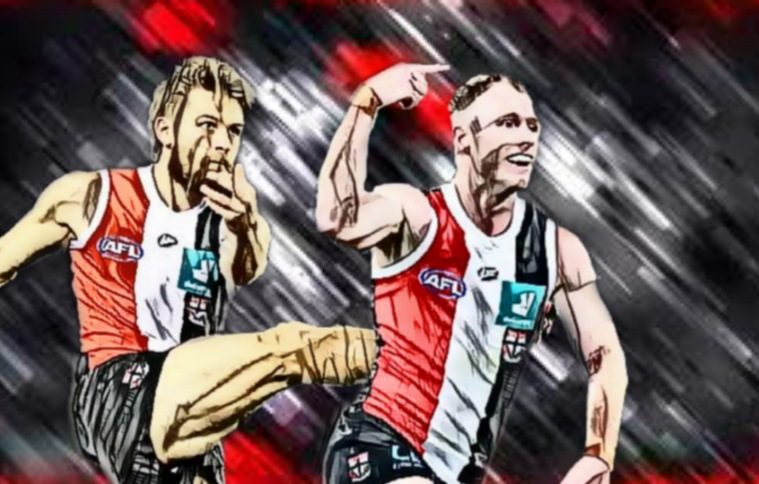 Under Alan Richardson’s reign as St Kilda coach, they were 0-19 against Adelaide, Port Adelaide and Sydney. The Saints have now beaten each of them within a fortnight, including a mammoth win against the Swans as they continue to build a very solid season.

Dane Rampe got up for the Pride Game after hand surgery during the week but couldn’t have the influence we’ve seen before as St Kilda restricted Sydney’s best players to record their highest score for 2020.

As was the case for many of St Kilda’s goals, teamwork led to an easy avenue to goal. In Dan Butler’s case, it was an avenue he created for someone else that ended up benefitting him.

The Saints took the ball quickly through the middle – something Sydney have become known for lately. Coffield handed the ball to Butler just inside the centre square at half back who wisely held play up with a floating sideways handball, allowing his teammates to drift forward and create options up the field. After dishing off, Butler continued to run forward and was on the receiving end of the play, ending up the one slotting the goal.

The Saints took advantage on the wing in the fourth term and entered forward 50. As a spoiled ball went out the back of the contest, Nick Hind made ground on it. Almost on the goal line, and instead of allowing the ball to trickle over for a behind, he lunged desperately and tapped it back inside the field of play. Dan Butler was the beneficiary again, swiftly swooping of the footy as Dane Rampe didn’t read it properly. Butler would snap his second goal of the day as a result, but it was the work of Hind that should be applauded.

A turnover from Dan Butler and intercept mark from Dane Rampe kick-started a Swans ball movement that was slick and fast. The transition and switch worked wonders as the ball found itself in the hands of Nick Blakey, 20m out in front of goal. A guy who is down on confidence and dropping in and out of games, he produced a shocking kick that missed the target from close to point-blank range. His kick stayed low and lurched to the left as he didn’t seem to kick through the ball at all. His lack of confidence seems to be a real problem – he had just five touches for the game this week, and could not get into the game whatsoever.

After a Shane Savage miss and with 20 seconds to go in the second quarter, the Swans kicked into high gear, going coast to coast to finish the quarter. It began with Dane Rampe at full back and involved Tom McCartin and Sam Gray, before Tom Papley scooped the ball up with finesse just outside of the forward 50. Papley used his pace to evade his opponent, handing off to the running Oliver Florent, who slotted one from 55m, bouncing it through for a goal on the siren to instil some belief in the Swans.

Nick Hind is an excitement machine, popping up with goals, one percenters, tap ons, and general playmaking ability. It seemed whenever there was a forward 50 contest that went to ground, he’d appear from the side of the contest, take one or two steps to balance and launch at goal. He kicked three goals as he remained close to the play and was always prepared to hunt his opponent.

Hind is a good runner with the ball and as he demonstrated several times, he can swiftly scoop the ball off the ground or get the running handball receive without breaking stride. In the modern game, many players tend to look sideways and backwards.

Not Hind. His first instinct is to take off towards the forward line. There were two important bursts Hind went on – one on the wing and one up the middle, each generating a couple of bounces each as he looked to get as much distance forward as possible and catch the Sydney backline unprepared.

Coming up against his former side for the first time, Zak Jones was influential as a mid/forward option. He was a leader in terms of pressure, especially in the Saints forward 50 and his goal helped break up a string of inside 50s for Sydney as they looked to claw their way back into the contest before three-quarter-time. He led the game for score involvements with nine and had two goal assists amongst them. In true Jones fashion, he wasn’t afraid to put his body on the line and continually linked up throughout the middle of the ground despite attention from his former teammates.

Jade Gresham was prevalent in all areas of the ground but made his mark in the midfield and drifting into the forward 50. He was a constant ball winner, with 23 disposals, and his work around the clearances was an important aspect in getting St Kilda going forward. Gresham phad eight inside 50s and was involved in many of the Saints scores. He also chipped in with two goals himself, including the very first of the game.

Nick Coffield, in his third season, is thriving with more game time and is becoming a key component in the Saints backline as he uses his run and carry to rebound the ball from the defensive end. A good user of the ball, his handballs almost always find a target running past. He possesses a great awareness and reads the ball well in the air. Three St Kilda goals were launched as a result of his team-high eight intercepts.

Ben Paton held his own against one of the Swans’ best, and one of the best small forwards in the comp, Tom Papley. Papley finished with one goal from nine disposals as Paton stuck to him to like glue to limit his influence. Paton didn’t allow Papley a clear run at the ball and forced him out of position multiple times. Paton controlled the ball in the back half and looked safe with ball in hand.

Jake Carlisle gave away a costly 50m penalty in the first quarter that resulted in a Tom McCartin goal. The reason for the penalty was a weird one – he threw the ball back with too much flight. Yep, I didn’t know that was a thing.

McCartin won a free kick on the wing and somehow the ball found its way into Carlisle’s hands. Upon hearing of the free to McCartin, Carlisle WAS technically giving the ball directly back as it did reach the Swan on the full. He just made it take its time to get there. The goal gave Sydney the lead following Tom Papley’s goal moments earlier. Of course, Jake would go one better by attempting to hit Dane Rampe’s broken hand during a small scuffle later on. Classy.

There was a 3-on-2 contest on the wing in the third quarter that favoured the Saints but concerningly, you had Brad Hill closest to the ball electing not to go after it. Instead, he opted to guard some space and allow his teammate to run onto it. Sadly for Brad, it didn’t work out that way. Elijah Taylor swooped in to get the first touch and keep it inside the boundary in a situation where the Saints really should have capitalised. Hill has had a slow start to his St Kilda tenure and they are almost winning in spite of him at the moment

A couple of Swans really need to back themselves more, especially if they could take the responsibility for a shot at goal and get the distance from 50m out. Both Sam Reid and Will Hayward have the power to launch big but each elected to give it off. In Reid’s case, he handballed it to Jordan Dawson, who’s a left footer, without the room to kick effectively.  He ended up opting for the top of the goal square, which Reid could have done himself!

Kicking into space is good, but it can be a lottery in regard to which kind of bounce the ball takes. If it heads to the boundary line in the current AFL you could be in trouble, and the players know it, too. Today we saw Cal Wilkie appealing for a deliberate free kick before the ball was even out of play! He had his hands up, asking the question of the umpire even when there were players in the vicinity that could have gained possession. Put your bloody hands down and go get the footy, Cal!

There was a strange decision by Aliir Aliir who was meant to be the only one contesting a throw in during the third quarter. The umpire was clearing stating “No St Kilda”, leaving Aliir to ruck unopposed, however he elected not to compete in the ruck either, allowing the ball to drop in front of him. That was very… interesting of him. Good sportsmanship, perhaps? Or confusion?  As soon as the ball hit the deck, players converged and cleared it before Aliir had the chance. It was a lost opportunity for the Sydney ruckman who could’ve grabbed it unopposed.

The Swans defence seemed to be all over the place, especially early in the match. Their numbers went to the direct contests and didn’t account for the St Kilda spread or those Saints players that were drifting to the goal square unopposed. Jade Gresham’s firwt quarter goal was one of the easier ones you’ll ever see. It was a true testament to the Saints forward pressure and set up across the middle that kept the ball in their forward half. St Kilda recorded 73 disposals inside forward 50 in the match, the most of any side in any match this year.

The Swans tried to go through the middle at every opportunity. It was working, as was the switch as Sydney got out to a rare early lead. The Swans stuck to their guns, even when St Kilda took the lead and kicked on, they continued to use the method. The problem was, the Saints were punishers in the middle on the turnover and used their dash through the middle to take it the other way, resulting in several shots at goal due to Sydney skill errors.

The ruck battle between Aliir Aliir and Paddy Ryder was great to watch as each player got under the skin of the other at various times. Both Aliir and Ryder gave away frees in the ruck for holding, but it was Ryder who experienced this first, able to position himself to draw contact from Aliir. The Swan tried to get the better of Ryder’s ruckwork in the same way he contested Nic Naitinui a couple of rounds ago, staying grounded to become the fourth midfielder.

The possession chains from the Saints were a key contributor to their win with St Kilda recording 8.2.50 from 18 possession chains inside their forward 50 throughout the match. Repeated quick hands found the open man with the small amount of space to get a clean shot at goal on multiple occasions.