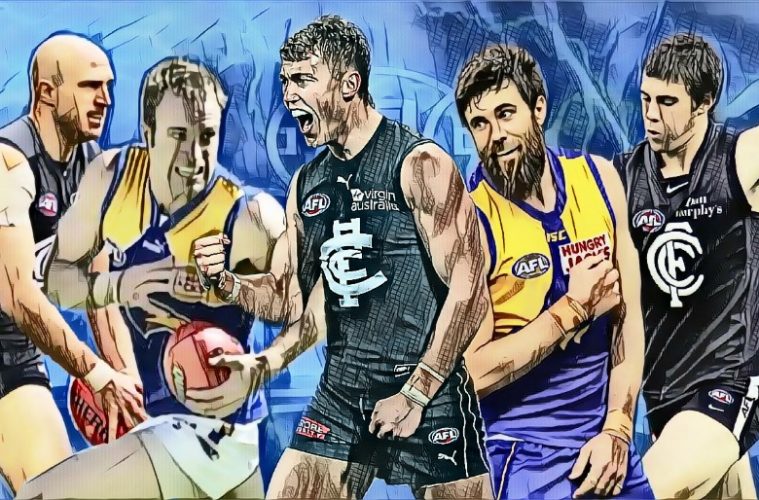 The Second Coming Of The Judd Deal

The Second Coming of The Judd Deal

“WEST Coast captain Chris Judd has told the Eagles he wants to be traded to a Victoria-based club, his manager confirmed today.

Manager Paul Connors told Perth radio station 6PR that Judd had advised the club of his decision at lunchtime today.

The news will spark one of the most frenzied recruiting attempts the competition has seen, with the 24-year-old widely acknowledged as the AFL’s best player.

Judd won the Brownlow Medal in 2004, just his third AFL season, and followed that by winning the Norm Smith Medal in a losing grand final side in 2005 before captaining the Eagles to last season’s premiership.”

A premiership winning Norm Smith and Brownlow Medallist walks out on the club he currently captains. In his place, arrive the uncertainty of picks 3 and 20 as well as unproven tall forward/former top 5 draft pick, Josh Kennedy. Pick 46 also is sent over to Visy Park as part of the proceedings.

What was considered to be the biggest trade in the history of the AFL’s trade week precipitates an avalanche of player movements at the West Coast Eagles. Former club captain, Ben Cousins is sacked a few months later, as is his close friend, Daniel Chick. The club fall from premiership contenders to finishing fifteenth that year; their lowest ever finish, beaten only by the club’s first-ever wooden spoon two years later.

It also allows arguably the first-ever real deep foray into the draft for the Eagles over a long period of time. Chris Masten, Brad Ebert and Scott Selwood replace the premiership trio in 2007, followed by Nic Naitanui and Luke Shuey the year after. Brad Sheppard, Andrew Gaff, Jack Darling and Scott Lycett in the next two. They form (directly or otherwise) the nucleus of the 2018 premiership side. Pertinently, six of them feature in the Eagles’ next finals run in 2011 – coming up victors against Chris Judd’s Carlton no less, before falling short to eventual premiers, Geelong the week after.

Chris Judd becomes a Brownlow Medallist, but ultimately underachieves at Carlton through no fault of his own. Kennedy and Masten become premiership players in 2018, with Kennedy winning two Coleman Medals along the way. You know how the story played out.

“I wonder if he’s looking at his teammates like Marc Murphy and Kade Simpson who have been at Carlton forever and won four finals between them.

“Cripps is yet to play a final and is staring down the barrel of missing again.”

“He’s out of contract again at the end of 2021, he’ll (almost) be 27 years of age, does he look at Tom Lynch and think that Tom Lynch left as captain of Gold Coast at 26 to Richmond and wins a flag, or is Patrick Cripps destined to have a career like Marc Murphy?” he said.

As with most things bearing Cornes’ byline, the online football community howled him down, buying into the clickbait frenzy intended with full velocity.

Have they failed to consider that history has shown that teams have traded better, younger, more qualified players from worse positions, and ended up better off for it though?

Is it possible that it’s currently in the best interests of the Blues to be trading Cripps at the peak of his powers, rather than Cripps leaving a sinking ship to pursue a flag with a more equipped side?

The arguments against this at the start of the season would have been plenty. One of the biggest being the lack of leadership at the club should the club captain depart. This has been soothed by the successful return of co-captain, Sam Docherty to the back half following two consecutive knee reconstructions. Docherty has all the hallmarks of a league-leading captain – a polished media performer, a player who leads by example, as courageous as they come and bleeds navy blue. Even if Cripps stays, the argument presents itself for the standalone captain model to occur.

Can the Blues survive more time in the football wilderness, either from a financial perspective, or ruining themselves as a destination club? A record membership tally, a healthy balance sheet prior to the COVID outbreak, and numerous players in the offseason nominating the Blues as their club of choice says yes. Club CEO, Cain Liddle has been quoted as saying that the Blues will look to delist up to 12 players at the end of the year due to the list shortening exercises conducted across the league. Do those decisions become a lot easier to make knowing that the club are putting premiership plans on hold a little while longer?

Yet the Blues have largely surprised onlookers with their healthy start to the year with Cripps a background contributor. None of the four wins to date coming with a Herculean performance from the #9 carrying the otherwise unrated team over the line. Teams have worked out where the line is when it comes to the constant scragging and holding off the ball at the stoppages with Cripps, and often overstep it to great effect. Cripps has also proven to be a non-factor during his time resting up forward.

It was evident that Cripps wanted to lead by example and turn the game off his own boot in Round Nine at Optus Stadium as the Blues were completely outclassed by a well-drilled Hawthorn outfit, but lacked the finishing skills to do so. Whilst Patrick Dangerfield and Nat Fyfe are routinely criticized for poor set shots and/or selfish forward line play, by comparison Cripps seems to escape this criticism. Marcus Bontempelli too to a lesser degree.

As Cripps time and time again attempted to turn the tide of Hawthorn dominance, it started to present as selfish; reminiscent of Brett Deledio’s comments about his former GWS teammates a fortnight ago, that demonstrated a distrust in his teammates’ capabilities, and instead wanted to win the game by themselves. Realising the predictability of Cripps’ want to take the stoppage, take on two or three tacklers and snap a speculative goal, made the Hawthorn defence’s task far easier when not having to account for better-placed teammates who simply didn’t register with Cripps’ tunnel vision throughout the night.

Let’s use the hypothetical situation that Fremantle find the necessary cap space to set up an NBA style pairing with Nat Fyfe at the end of the year.

Let’s even use the same formula of the Judd deal to make it happen. Fremantle’s first round pick (currently pick 3 also, but likely to slide as far as pick 5, noting Fremantle’s deficit of points and the Brad Crouch free agency scenario), a former top draftee – I’d have said Andrew Brayshaw or Adam Cerra at the start of the year, but given both are currently in All Australian contention, that seems almost too lopsided a deal. Sam Sturt has arguably shown as much for Fremantle as Josh Kennedy did in his two seasons in navy blue, although if a deal were to go down, I suspect the Blues would push for Caleb Serong instead. You’d also see the Blues receive Fremantle’s second-round pick in exchange for their third-round pick.

Since the Judd deal took place, we’ve also seen the rise of free agency. The departure of Cripps, one of the games’ highest-paid players would then allow for the Blues to snare a free agent of a Zac Williams level, and possibly more to be competitive with topping up the lower rungs of their list, to perhaps try and snare another Marc Pittonet deal with a late pick. Does it avoid tough calls being made on club legends Kade Simpson, Ed Curnow, Eddie Betts and Marc Murphy?

It also provides them with sufficient currency to finalize the Tom Papley deal with a tough-talking Sydney Swans.

Tom Papley, Zac Williams and Caleb Serong for Patrick Cripps? It’s a no brainer for mine.