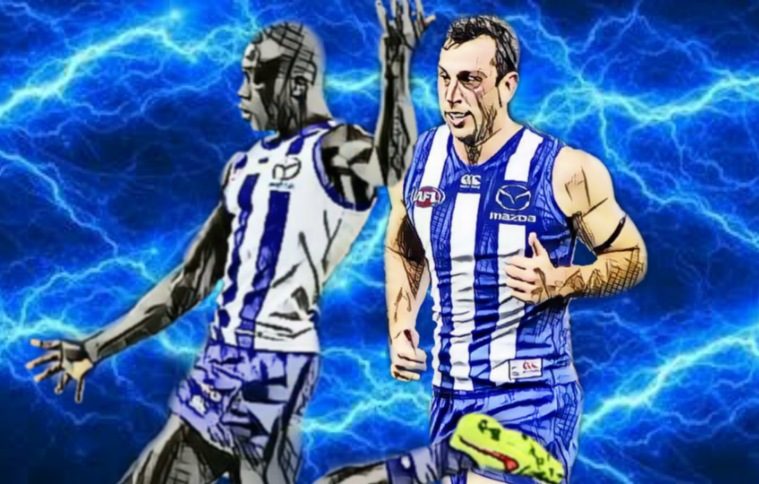 It was 17th against 18th on a Saturday afternoon in perfect football conditions on the Gold Coast when North took on Adelaide at Metricon. In a season where neither side has really managed to get a roll on, this game loomed as a good chance for both sides to get a win on the board after a torrid period following footy’s resumption.

North made a statement at selection before this game. Ben Brown, obviously, has a lot more on his plate to worry about than football, and irrespective of whether he was ‘omitted’ or given leave for personal reasons, his absence in the forward line posed an interesting challenge for Rhyce Shaw’s side. Jared Polec, on the other hand, seemed very stiff to be dropped given his 25 disposal, one goal effort in a loss against the Blues last week. In any event, the Roos went into this encounter looking to end a six game losing streak against the bottom of the ladder Crows.

Adelaide, on the other hand, are verging on a year without a victory. In fact, not since August 3, 2019 have they managed to walk away with four points. While that period of time, perversely, contains “just” 11 losses, at some point going winless for so long becomes taxing. Matty Nicks is still looking for his first win as coach, and North loomed as seemingly a good opportunity to notch up that particular milestone. With Taylor Walker lost to a stomach bug, and Tom Doedee missing, it was going to be a tough ask, though it certainly wasn’t beyond the realms of possibility.

In a clash that shaped as a belter and resulted in a belting, here’s what happened:

A Little Bit of Majak

In no way do I want to sound tokenistic, flippant or at all ignorant about the mental health issues facing Majak Daw; clearly, the media does not need to be attempting to provide insight into personal problems. However, what was most important about this game, and what I would be remiss to not mention, was Daw’s return to football.

While Majak’s performance was almost secondary, it’s worth a mention. Though it certainly wasn’t his best game of AFL footy, it was a pretty encouraging return having not played for almost two years. His eight touches included four marks, two of which were contested, and a goal that would have brought the house down if there was a house to have been brought down.

In truth, even more important than his performance in this encounter was the fact he was out there to begin with. Football has lost too many good people to mental health battles; some permanent, some thankfully temporary. Society itself has lost to many good people to the same thing. I know you don’t come hear to hear bleating about social issues; the reality is neither do I. However, what’s become most clear this year, in the time of a pandemic, is that the time to suffer in silence is over. If you are battling, speak out. If you think someone you know is battling, check up on them. Some things are more important than footy, and mental health is absolutely in that category.

On a note that doesn’t really relate to the game but does relate to this point, Tom Papley in an interview with Fox Footy identified he’d be wearing a black armband in his game after losing a friend from his hometown to suicide. Encouraging people, and especially men, to seek help where it needed is a worthy cause.

Just another best on ground performance from a bloke who is clearly the best ruckman in the game at the moment. As if he had a point to prove to those arguing it was some combination of Gawn and Grundy then daylight, Goldy has taken his game to near career-best levels in 2020, and prior to this round was sitting in equal fourth in our Mongrel of the Year award. He’ll add another five votes to that total this week, and in all likelihood will sit second on the leaderboard.

His ruck work in this encounter was absolutely sublime. He was effectively rested in the last quarter at full forward, but racked up 19 touches and 19 hitouts for the game as the Roos racked up 35 clearances to their opposition’s 20. The ruckman himself had an equal game high eight clearances of his own, and directly assisted three goals as part of eight score involvements. What was perhaps most impressive was his athleticism at age 32; leaping over Reilly O’Brien to feed, for the most part, Jed Anderson out of the middle.

There’s still a lot of life left in those (G)old legs, and if he can continue to play to that standard there’s no reason North can’t be competitive for the remainder of 2020.

It’s hard not to respect Adelaide as a footy club, even if you don’t particularly like them. For a club that has never bottomed out, they’ve managed to draft and recruit reasonably well and have frequently been a finals feature. With that out of the way, this is absolutely the worst Crows team to ever set foot on a footy field in my memory. Having only once ever finished in the bottom 4, in 2011, they look set to double that number in 2020.

At times this afternoon the Crows looked either insipid, disinterested or both. While it’s hard to isolate one moment, and I’ll get to a number of the goals that North kicked with a complete lack of applied defensive pressure, the moment that sticks in my mind was in the passage of play leading up to Aaron Hall’s second goal early in the last quarter. With the game effectively beyond reach, Nicks would have been looking at the very least for some effort or intensity. Instead, what he got from Matt Crouch met neither criteria. With Jasper Pittard having the ball about 70 metres from home, Crouch stuck up one arm as pressure and barely broke out of a walk. It would be unfair to blame the loss on him—Adelaide simply had too many passengers—but it smacked of a lack of desire to be out there.

If any of you have seen the wonderful documentary series The Test, you’ll see Ricky Ponting discussing his contempt for fielders sticking up their arm to signal they weren’t going to field the ball. That’s exactly what this looked like.

As I say, North kicked a number of pressure-free goals. Davies-Uniacke’s second was best described as a waltz out of a pack before he snapped truly. North kicked three goals from kick-ins. That number should read as an absolute indictment on Adelaide’s performance today. It was the manner in which North ran the ball down the ground which should hurt the Crows more than anything, though. Cam Zurhaar’s goal in the last capped off one of the easiest coast-to-coast goals I’ve ever seen in my life.

I really don’t like being negative in these reviews. I try to focus on the positives, but if there were any for Adelaide they were few and far between. Tom Lynch was solid, although he was forced by lack of personnel into a role much too far up the ground for him to have his usual creative influence. Reilly O’Brien tried hard and laid a game high eight tackles, but though he broke even with Goldy in the hitouts he was beaten around the ground. Seedsman and Laird provided decent run but went missing too often.

It would be unfair for me to give the Crows a whack like this without acknowledging the sheer weight of numbers missing from their best 22, including Sloane, Walker and Doedee, all men who have captained the club at some point. That probably explains the rudderlessness, but it doesn’t explain the lack of defensive effort from some players in red, navy and gold.

Luke McDonald Had A Farm

While I don’t know exactly what Luke McDonald does in his spare time, and if he does have a hobby farm then good on him, he had a farm’s worth of space to work in today. I want to take nothing away from North Melbourne in acknowledging the workrate, or lack thereof, from the Crows, but the fact that no one went near McDonald at any point probably indicates something about his body odour, because there’s no way a team should have let him run loose the way the Crows did today.

The father/son pick had 35 touches today. That sits behind Jack Macrae on Wednesday and Shaun Higgins a fortnight ago in equal third for the most disposals by any player in a game this year. Staggeringly just five of them were contested possessions. Only one out of every seven times he touched the ball was he required to do so under pressure. That’s an absurdity, frankly. It wasn’t as if he wasn’t damaging either, with eight score involvements, six intercepts and 505 metres gained, as well as 10 rebounds from defence.

Again, absolute credit to McDonald. He worked hard out of the backline, racked up touches and performed his role to near-perfection. With Jared Polec out, he was probably the player who needed to step up the most and he did, and he will most certainly receive votes for the performance.

It would probably be unfair of me to mention how many of Adelaide’s best 22 were out without also acknowledging the absence of some of North’s best players, including most notably Ben Cunnington. The midfield bull has been missing for most of the year, and while Jy Simpkin filled the void earlier, his form in recent weeks has been down. He was okay without being great today, but a new, fill-in bull stepped into the void admirably.

Jed Anderson was probably second best on ground, behind his ruckman. His 28 touches included a game high 13 contested, while he also booted a goal from nine score involvements and had eight clearances. Most impressive, however, was his defensive workrate. The Roos would have been excused, probably, for playing bruise free footy but the former Hawk was simply not having it, and laid a game high eight tackles in a very, very good showing in the middle of the ground.

That’ll probably do me. The Roos were very good in this encounter. 19 goals in what is effectively three quarters of footy is a massive number, and perhaps most pleasing for Rhyce Shaw would be the fact that it wasn’t Shaun Higgins or Ben Cunnington carrying the midfield load. They next take on the Cats on Wednesday night and, despite form, are a very good chance to come away with the four points.

On the other hand, the Crows desperately need to regroup and forget this game ever happened. They get to fly back home to Adelaide and take on a Melbourne side on Wednesday who were also disappointing in their Thursday night encounter with the Power. It will be a struggle, certainly, but the Crows really need to get a win on the board and this may well be the time to do so.

If you or someone you know needs help, please don’t hesitate to reach out.