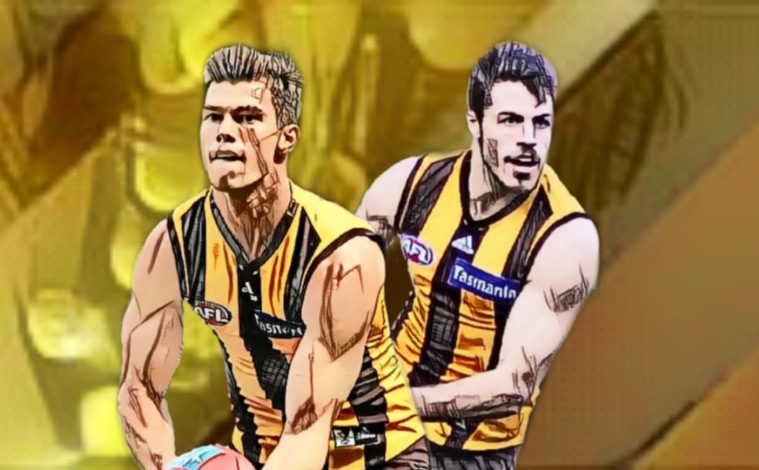 The Hawthorn Football Club have had a few weeks under close and intense scrutiny from the media.

If the poor on-field results weren’t telling enough, Alastair Clarkson jawing off to anyone that directly affected the Hawks, from the umpiring, to Tom Papley, to possibly myself if I keep on critiquing him – every little thing doesn’t help the cause. Then there was Don Scott pretty much revealing that the Hawks were cheating the salary cap in the late 80s and early 90s – coincidentally when they won flags, during the week, opening up another can of worms from the media that they didn’t need.

One thing for sure though is that it made this contest even more intriguing. Their opponents, Carlton have been playing themselves into decent form over the past month and a bit. Some even started to murmur that wonderful F-word we as journos like to throw around at the midway point of the season.

Whilst the first quarter didn’t go the way Hawthorn would have wanted…  actually scratch that, they hardly turned up in that first quarter. They did turn up after the quarter time break and put in their best performance since round one this season on the back of incredible running off half back and solid contribution from their premiership stars.

To say that the Hawks needed this win was an understatement. Since the win against North Melbourne in round four, they have been outworked, outplayed, the veterans and the stars of this team weren’t performing and ridiculously enough, people started to question whether or not Clarko should be the right man for the job going forward.

It looked like the questions about this team would continue in the first quarter as Carlton absolutely smashed them in almost every aspect around the ground. The Blues dominated the contested possession count 41-28 and to top that all off, Carlton were on top of the tackle count, despite having more of the football.

Often when that is the case, it’s complete domination on the scoreboard and the Blues kicked the opening five goals of the contest and led by as much as 31 points. When the Hawks did have the football, they looked lethargic and coughed it back up in a matter of seconds, which certainly contributed to that domination.

Will Day’s first goal in AFL football was a rare positive in the opening term for the Hawks. Lining up for goal approximately 40 metres out on a very tight angle, he ran around the man on the mark, with a nice shepherd from Isaac Smith and slotted it through nicely. I’ve een keeping an eye on this kid since his debut and he is consistently doing nice things along the half-back line. He’s definitely going to be something to watch in the future.

It was also the turning point in this game as Hawthorn kicked nine of the next ten goals of the match in what I can only describe as a stunning turnaround. After Levi Casboult kicked the first goal of the second term, Hawthorn kicked six goals in a row to take the lead on the back of effectively taking the game on. It was a stark contrast to the first term; they were running, they were creating, and they were playing footy befitting of a top-eight side. Their defence also allowed them to keep the ball inside their forward half and disable Carlton’s abilities to move the ball.

It should’ve been a seventh goal on the half-time siren, but Tim O’Brien dropped a relatively easy mark about 20 metres out directly in front. Credit to him though, he made up for it in the third term, converting a set shot that came with a bit more difficulty. The Hawks continued to pile the pressure on for most of the term, highlighted by Jarman Impey kicking a goal in his first game back from the ACL injury he sustained about a year ago. Watching all of his team mates get around him after that is both heartwarming for the footy fanatics and encouraging if you’re a Hawks supporter.

Trailing by four goals at the final break, the Blues looked like they were primed to take the game back when Jack Martin marked and goaled within the opening minute, but they would only kick one more for the rest of the term. It wasn’t for a lack of trying. They had one fewer inside 50 entry in the last quarter, but a few of them didn’t favour their forwards, and if they did, the shots went everywhere but the desired result.

Where, on the flipside of things, Hawthorn were able to make a better fist of things with their entries. Which would’ve been more of a relief than anything else for Hawthorn supporters, given how poor their final quarters have been this season. They’ve faded badly, kicked horribly and nearly thrown away match-winning leads. But this was their night and nothing would deter them. They bounced back and bounced back well.

I’ll be honest it’s hard to decide who Hawthorn’s best player was, which will make the votes even harder. Tom Mitchell looked almost back to some of his best football. People are quick to criticize the fact that he is an accumulator and might not do as much as what the stats may suggest. But I thought he played a magnificent game – 28 disposals – 10 of those contested, along with eight tackles, five clearances and five inside 50s.

James Worpel hasn’t had as big of a year so far as he would’ve liked. It’s probably a fair assumption, given he was the number one midfielder in the absence of Mitchell last year. But tonight I thought was one of his best games of this season – 20 disposals, five tackles, four marks and seven intercepts. I also thought Liam Shiels (15 disposals, four marks, four inside 50s, three tackles, five clearances and two goals) and Jaeger O’Meara (18 disposals, four tackles, five clearances and one goal) were very solid performers in the middle.

As much as I don’t like James Sicily carrying on like a five-year old when he doesn’t get anything his way, it’s hard not to marvel at his abilities in defence. He reads plays superbly, he marks so well and he’s a reliable user off half back. He had 15 disposals, six intercepts, five tackles and four marks in a solid defensive game. Also liked Sam Frost trying to take the game on at every opportunity with his 15 touches. Not all of them had the desired effect, but when it came off, it came off brilliantly. He also had a game-high nine intercepts, which is kind of what he was brought in from Melbourne to do.

I want to touch on the return of Luke Breust. He missed the past month with a fractured jaw, but returned for this one and you can tell that the forward line functions so much better with him in there. He contributed to the scoreboard with two goals and had five score involvements. Shaun Burgoyne (five score involvements), looked handy up forward, Jack Gunston will probably feature in the votes, kicking three goals and taking a few impressive grabs – three of his seven marks were contested and also had seven score involvements from 16 disposals.

Patrick Cripps was probably Carlton’s best player, but even then, I don’t think he was particularly influential on the game. Yes, 27 disposals, 19 contested possessions, eight clearances, five tackles and a goal might jump from the page as a great game, but I couldn’t feel it as the game unfolded. 19 of his 27 disposals were handballs, which could explain why his impact on the contest seemed down.

He also missed a couple of gettable opportunities. This includes one where he was about 50 metres out, with not much angle to speak of, he decided to try and run around the mark and was circled by Hawthorn players, so he gave it off, which eventually resulted in a turnover. He looked a bit indecisive, which is a bit unlike him. Well, at least the umpires are looking after him I suppose.

Levi Casboult played himself such a strong game up forward. It’s going to be interesting to see where he fits in the grand scheme of things when Mitch McGovern and Charlie Curnow come back into the team. He’s always had superb marking hands he looked imposing up forward, kicking three goals from four marks and five kicks. At the other end, Sam Docherty (19 disposals, eight intercepts, three marks and four rebound 50s) was doing his best to mop up the loose ball across half back and Jacob Weitering (14 disposals, seven marks, five intercpts) were strong in defence.

Ed Curnow played a typical workmanlike game in the middle. Often renowned for his tough approach to the contest, he delivered 19 disposals, 10 contested as well as eight clearances and six tackles. I also liked Matt Kennedy’s game – he tackled well and won himself a couple of clearances for his trouble. I would like to see Carlton continue to put games into him – he hasn’t had a fair run of it.

Apart from that, there looked to be a fair few passengers: Eddie Betts did lay the six tackles, but he couldn’t get hands to the ball much. Jack Newnes kicked two early ones, but did nothing else. Sam Petrevski-Seton hardly introduced himself to the ball all evening, Harry McKay was virtually unsighted after quarter-time and as much as it might be harsh to talk about a second-year player, Sam Walsh struggled to get himself involved by his 2019 standards. Not sure where Marc Murphy is at in terms of his footy, but if he isn’t at the proverbial cross-roads yet, then he isn’t too far away.

That’s a wrap from me for now. Well done to the Hawks. Plenty of questions were asked about this mob, and whilst this win won’t answer them all, they certainly took a step in the right direction. They have the bye next round before they tackle Fremantle back at Optus Stadium on Monday-week in a game they will fancy themselves as favourites.

Carlton also have a bye next round, before they take on West Coast Sunday-week. That’s going to be a massive test for the Blues. Many expected them to take care of the Hawks and they were second best to the football after quarter time and the result was indicative of that. The Eagles have been in good form, winning their past four, potentially five if they can get past the Cats this week. They will be in danger of being out of touch with the eight should they drop that one to the Eagles.

We will see in due time as the festival of football unfolds.

And hey, you know we have memberships here at The Mongrel, right? We are small, we’re independent and we’ve knocked back cash from the gambling industry as I reckon I’d be a massive hypocrite if I complained about all the gambling ads on AFL coverage and then sold out to them. For 40-80c per day you get access to our wingman rankings, defensive rankings, weekly player rankings as well as members-only columns and early access to my Good, Bad and Ugly evening game reviews.