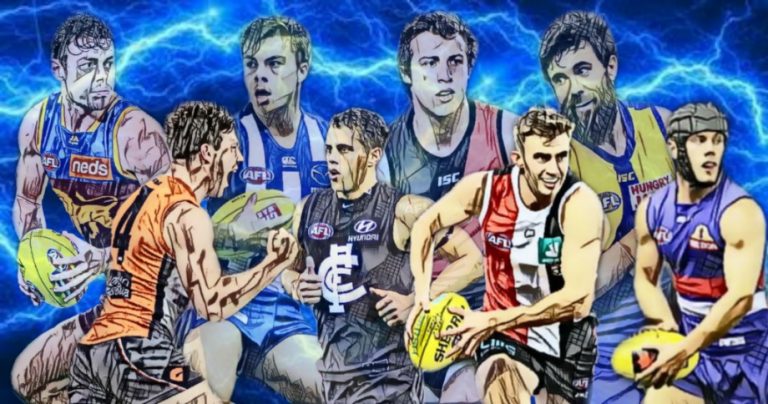 The Winners And Losers Of Round Eight

It’s that time again – Monday evening and it’s time for the winners and losers of the round.

Yes, I’m aware of who won on the scoreboard and which team sits where on the ladder, but with one day between this round and a virtual cornucopia of footy over the next 20 day, I don’t have time to explain this concept to you.

I do, however, have time to tell you I’m not explaining the concept to you. Priorities…

So, without further ado, the winners and losers of Round Eight.

Poised, calm, skilled, measured… you can throw out a number of adjectives to describe the game of Caleb Daniel and might not do him justice.

The little fella was so good in the Dogs’ back half as the clean-up player that I’m surprised Stuart Dew didn’t attempt a defensive forward on him.

With the GWS season all but on the line against the reigning premiers, the lightning rod of the Giants stood up and made a statement.

With five goals, including the sealer, Toby Greene sent a reminder to the league that when he is on, there are few better.

The most underrated stopper in the game was at it again on the weekend, making life difficult for a player many believe is in All-Australian contention.

With North Melbourne’s midfield bull out of action, Jy Simpkin has been leaned on heavily. However, with Curnow for company he could not give the Roos a lift, finishing with just 11 touches- another victim of the Curnow effect.

With what looked to be a broken hand, Dane Rampe was the standout player in the Swans’ victory over the Hawks.

And that is saying something with Tom Papley slotting four at the other end. With 12 intercepts and nine spoils, Rampe made the defensive 50 his.

Ken Hinkley wanted Dougal Howard to play forward. He wanted it so much that Howard would either play there for Port, or find another home. And he found that home against St Kilda.

Playing against his old team, Howard took responsibility for Charlie Dixon, and held the big man to one goal as his Saints won for second time in five days at Adelaide Oval.

Two Saints make the list this week, and deservedly so.

After last week’s heroics, the stage was set for Robbie Gray to turn it on against St Kilda. Not if Callum Wilkie had anthing to do with it, though.

Wilkie held Gray to just seven disposals and three score involvements for the game – his contribution to the great St Kilda win should not be overlooked at all.

As the Crows search for positives in an 0-8 season, they may have found one in Wil Hamill.

He showed plenty in the Crows’ defence, with his desperation one of the key factors in the Crows’ comeback. They fell short, of course, but his nine intercept disposals gave the Crows a glimpse into a brighter future.

He is looking more and more like the player the Bombers need him to be.

The former number one pick picked up 25 touches and eight clearances to go with his ten tackles as the pivotal player in the Essendon line up.

Ah yes… this is more like it from the biggest recruit of the year.

Kelly was blindingly good against the Pies, picking up disposals all over the park and hitting the target on 27 of his season-high 30 disposals. If this was a sign of things to come, it is a great sign indeed.

So, the old fella has a bit left in the tank, huh?

Seven goals straight in the best performance by a forward all season saw Kennedy soar to second in the race for the Coleman. Not bad for a bloke who could hardly get near it on the dewy Queensland surfaces.

Those dewy Queensland surfaces are no issue for Lachie Neale.

He racked up 33 touches and seven clearances as the best midfielder on the park against the Dees. Another three-vote game for Neale should see him shorten considerably in Brownlow voting yet again.

The best player on the park whilst the Cats were squeezing the life out of the Dockers.

Matched up against Patrick Dangerfield for the majority of the night, Serong showed plenty of grit.

Notching 22 touches and travelling at 77% in atrocious conditions, Serong added seven tackles in the best outing of his young career.

EVERY TALL FORWARD IN THE SUNS V DOGS GAME

Just one… it would have been nice if just one had adapted to the conditions and produced something even remotely special.

It was a game made for defenders and to a man, each tall backman won their contests. Ben King, Sam Day, Josh Bruce and Billy Gowers… all had their backsides handed to them in the wet

EVERY TALL FORWARD IN THE GIANTS V TIGERS GAME

See above. The big forwards STUNK in this one as well. Lynch, Riewoldt, Cameron… all were horrible.

It’s one thing to throw your weight around, but you’ve got to have another string to your bow.

I’m a big fan of Zurhaar, but he was off the boil against the Blues. In a seven-point game, Zurhaar had eight touches, three turnovers and four free kicks against. If he lifts, North is a chance.

Hawk fans have been crying out for Lewis to get a run in the seniors, and with the injury to Tim O’Brien, they got their wish. They may be wishing it was denied.

Lewis returned one touch for the game. But he had a hit out as well, so that’s something.

After a few weeks where he was doing heavy stuff IN ADDITION to some quality work with the footy in hand, Zak Butters left one of his two talents out of the equation against the Saints.

He still threw his weight around, but with just seven touches, and three free kicks against, his effort was indicative of where Port were at on the day.

The Pies needed a forward to step up and be dangerous in the absence of Jordan de Goey and the scene was set for Stephenson to shine.

He responded with a listless performance, picking up most of his touches way up the ground and rarely looked like a threat.

Had the opportunity to hurt the Lions as he was able to get Harris Andrews out of position and mark out the back on several occasions.

Converted terribly, with 0.3 to his name – a stark difference to his Round Seven performance. You don’t get many chances to get the better of Andrews; you’ve gotta take them.

Shocking. Like he has never played a game of wet weather footy in his life. With Duncan and Menegola amongst Geelong’s best, much more was needed from him.

EVERY FREO PLAYER WHO TRIED THE EXTRA HANDBALL

Got anyone that should be added to either category? How about someone that needs to be removed. Add your own in the comments below, or hit us up on our socials.