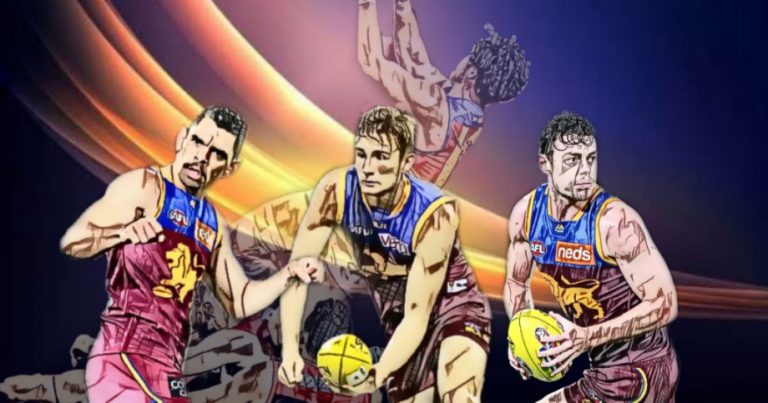 Let us start this review with a question: Have Melbourne regained form?

After two wins on the trot: One against an improved Gold Coast team and then a thorough pantsing against Hawthorn, this was going to serve as a massive test for the Dees, coming up against the Brisbane Lions, who have nestled themselves inside the top two before Sunday night, having won five of their last six games.

So, to answer the question above, Melbourne still have a bit of work to do in regard to their polish in front of goal. But make no mistake, they do look a much better outfit as opposed to the red and blue dreck that stumbled out on the park last year. They looked a bit more confident with the footy, but it was their finishing in front of goal that cost them on Sunday night.

The torrid conditions up on the Gold Coast meant that it was always going to be a scrap, but Melbourne held sway against the more fancied Lions for the most part of the game. They looked the livelier of the two in the opening quarter, despite the fact the scores were deadlocked at quarter time. The smalls of Jake Melksham and Bayley Fritsch looked more imposing at ground level for longer periods of the first term.

Following the first break, however, Brisbane began to flex their muscles in the contested spaces. Being +10 in contested possessions might sound like there’s not much in it, but on a night where it was more important to get first hands to the footy, Brisbane almost won it on the back of smothering the Dees inside their own defensive half. The opening 11 minutes saw the Lions record nine inside 50s and kick 2.2 for their rewards.

The Dees did manage to wrest the momentum away, but it was for nought when a clumsy free kick gave Brisbane a third goal for the term and a 14-point lead heading into the main break. This lead extended to 21 points midway into the third term as Neville Jetta stupidly soccered it out of bounds 20 metres out from goal, with the umpire paying deliberate.

Up to this point, he’d been playing a very good role negating the influence of Charlie Cameron, keeping him under wraps, whilst copping some heavy hits himself. It is okay to bend down to try and pick it up and considering he was under some kind of pressure, conceding some ground wouldn’t have hurt as much as a free kick to Cameron in the pocket. As you’d expect from an All Australian-calibre forward, Cameron snapped truly for his first of two goals.

His second goal later in the term was a gem – a very nice finish on the back of a couple of neat little volleyball taps from his teammates on the wing. It was one that they needed because Melbourne started making a push. The Dees got one goal through Jake Melksham but missed a couple of gettable ones. To be fair, they missed several easy shots throughout the night and I would say that is just as costly as anything else that happened.

People will be quick to jump on the unnecessary score review late in the last quarter, and I agree to an extent. There was only a couple of minutes to go and at that stage, Melbourne got themselves to within three points, keeping Brisbane goalless all throughout the last quarter. Jake Lever marks on the goal-line and switches from one pocket to another, and they are just about out of defensive 50 when the goal umpire calls it to be reviewed, just to make sure that the mark was in fact a mark.

Did it ruin Melbourne’s momentum? Yes. Did it allow Brisbane to set up defensively? Naturally. Did it lose them the game? You’re a fool if you answer yes to that one. It’s not fair to pinpoint one moment. In the final 100 seconds of the game Fritsch gave away a 50 metre penalty for not giving the football back to Zac Bailey and guess where that infringement happened? IN MELBOURNE’S FORWARD 50! The ball was clearly out on the full, and Fritsch failing to give it back in time almost stopped Melbourne’s chances then and there.

Stripping it back even further, there were so many easy misses. Ed Langdon has a shot in the second quarter 40 metres out straight in front, but his shot drifted left. Sam Weideman showed some decent marking hands throughout the night, but missed at least three opportunities from gettable distances. Harley Bennell ran to about 15 metres out after a great gather and dish by Clayton Oliver and hooked it left in the third term. Kysaiah Pickett threw one onto his boot from close range and missed with Ed Langdon begging for the ball running into an open goal square. James Harmes kicked from 45 metres out directly in front in the final quarter and he missed.

Part of Melbourne’s 2019 problematic was that their ball movement going forward and their finishing skills were that woeful, it would’ve made your average reserve-grade football team look like goal kicking champions. They’ve improved their attack and intensity this year, there’s no doubt. Believe it or not, their accuracy hasn’t been too bad over the past month either – they’ve kicked totals of 8.4, 12.8 and 14.7 in the past three games. Sunday night just wasn’t their night in front of the sticks – it happens to best of teams.

As for Brisbane, this win sees them level with Port Adelaide at the top of the ladder. The good teams will find ways to win and Brisbane have showed they can compete with the best of them. However, they kicked five behinds in the final term, and if they couldn’t finish it off, you can argue that they had every right to lose it themselves. But, if you win them, you win them and that’s six in past seven for the Lions.

In a game where it was hard and tough from start to finish, I thought Lachie Neale was Brisbane’s standout. 33 disposals in which almost half of those were contested, along with seven clearances, six marks and seven inside 50s made for a great outing. If he’s not leading the Brownlow at this stage of the season, then he has to be running pretty close. If there was perhaps one knock on his game, it was the fact that he only laid one tackle all game, whereas his mates in the middle had at least six.

One of them was Jarryd Lyons, who recorded a team-high nine tackles, as well as 22 disposals, seven marks and four inside 50s. It is absolutely beggars belief how or why Gold Coast let him go, but he’s playing such a handy role for the Lions. Jarrod Berry was solid with 20 disposals, six tackles and four clearances, but he did give away seven free kicks, which is a bit of a negative, but I loved how hard tough he goes at the footy and I thought Hugh McCluggage was a wingman? Well 10 of his 22 disposals were contested possessions and won a few clearances and four inside 50s for his troubles.

Harris Andrews played a typical Harris Andrews game: spoiling almost everything and anything that came his way, I did see him caught out of position a few times with Weideman sneaking out the back, but lucky for him, the Weed missed all of his shots on goal. Cam Rayner has looked a bit more dangerous and lively up forward and if he held onto that mark where he flattened Max Gawn, we’d be talking about a new frontrunner in the mark of the year race right now. In recent weeks and Dayne Zorko had himself a solid captain’s game, working all around the ground for a nice return.

The last guy I want to mention from the Lions before I swing it to Melbourne is a young man by the name of Zac Bailey. There isn’t much of him in stature, and he has had some hamstring issues in the past. But when fit and firing, he’s not just quick, but hard-working and is capable of playing so many positions around the ground. He had 21 disposals, eight marks, one goal, four inside 50s, five intercepts and seven rebound 50s.

If the Demons had won this game, the first person I’d look to would be the work of Clayton Oliver. I’ve always been a fan of his in and under work – both when he does have the footy and when he doesn’t. 28 disposals, five clearances, five marks, 10 tackles, four inside 50s and four intercepts. He was simply superb in conditions that suit his style of play. Although he missed a couple of costly targets early in the game, his slick hands and clean gathers when others tired made up for them.

Jack Viney is another player in this category. I’ve been a bit of a critic of his over the past month and a bit for perhaps coasting a bit more as opposed to being this bull in the middle that he has been renowned for in the past. However, he looks like he’s almost back to his best form: 24 touches with 13 contested, along with three clearances, five inside 50s and a goal.

If ifs and buts were candies and nuts, then Christian Petracca would be the best player in the competition. There’s been a lot of talk about his 2020 form, and it’s rightfully warranted. After years of teasing football fans with inconsistent brilliance, he has been setting the season on fire. Is he the best player in competition? Cool your jets Shane Crawford. He had ten disposals in the opening term, and finished with 24 for the game, to go along with eight tackles, nine score involvements, five inside 50s and four clearances. After a great start his impact tapered a little during the game, but he finished solidly enough.

Melbourne’s twin towers in defence in Steven May and Jake Lever were strong. They combined for ten rebound 50s and 29 disposals as they repelled the advances of Brisbane in the latter stages of the game. I’m surprised that Jay Lockhart is playing more as a defender this year, after showing what he was capable of as a forward, but he had eight intercepts and four rebound 50s from just ten disposals.

The last player I’ll mention is Max Gawn. In the hitouts against big Oscar McInerney and Archie Smith, he dominated: 41 hitouts with 15 going to advantage. But around the ground, I thought he was kept somewhat honest by the man dubbed as ‘The Big O’. Yes, it was a wet and slippery surface at Metricon Stadium, but I didn’t think his presence around the ground was felt as often as it has over the past few years. He and McInerney were even in the amount of possessions they had at 13 apiece, but Gawn cracked in with five tackles and three marks.

Well, time to get a well-earned rest before this sudden barrage of football on the television – 20 straight days to be exact. Melbourne will be at the Gabba on Thursday to take on Port Adelaide in what will be another big test for the Dees going forward. If this game is any indicator, then we might be in for another beauty. The Lions play an Essendon side that just limped over the line against a winless Adelaide on Friday night – you can sense blood in the water there if you’re a Lions fan.

I’ve never been more ready for this impending festival of football. Hope you’re as ready too.