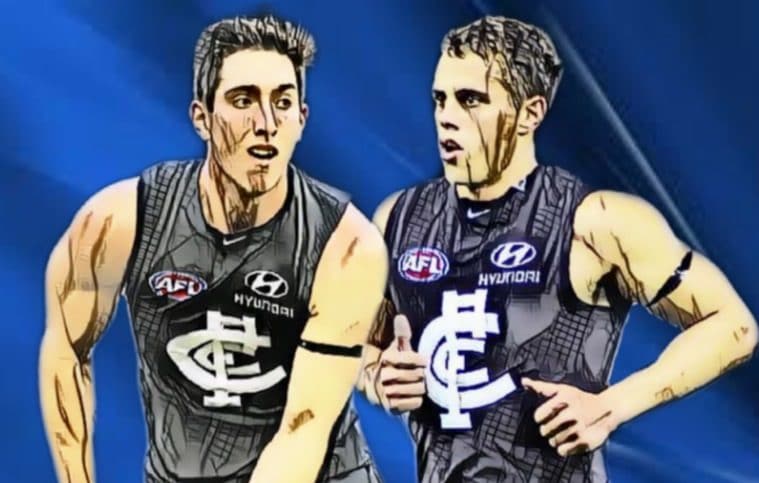 A Not-So-Quick Yarn About The Blues And Kangaroos

Let’s get straight into it this week – welcome to a not-so-quick yarn.

Earlier this afternoon, Carlton clashed with North Melbourne at the Gabba where the Blues emerged victorious by a narrow seven-point margin.

It ended up being a much tighter contest than perhaps it should have been, with Carlton allowing North Melbourne back into the contest after holding a five-goal lead late in the first term.

Following a devastating loss last week, this was a must-win for the Blues in order to make a serious case as a team threatening to claim a finals berth.

While for the Roos, they simply had to show something after five straight losses coming into the contest.

Among the best for the Blues were Ed Curnow, Sam Walsh, Patrick Cripps and Matt Kennedy. While Jared Polec, Trent Dumont, and Bailey Scott all had strong outings for their struggling side.

For a game where so much chaos played out at the end, it was the start that told the tale. After last weeks heartbreak, Carlton came in with a chip on its shoulder and blitzed the blue and white early, kicking six of the first seven goals.

From that point on, the contest tightened up and the Roos narrowly won the arm-wrestle that ensued over the remaining two and a half terms, forcing themselves back into the contest.

Carlton held onto a three-goal lead for most of the day until the Roos surged late in the third term. If not for a silly free kick given away by Jasper Pittard on the siren to steal away a shot at goal for Jared Polec, North may have hit the front at the final break.

The final term was a slog due to the rain and the Blues managed to hold onto their one-goal advantage and eke out a victory.

Although some credit must go to the Kangaroos for the way they fought back, a lot of it came down to the Blues taking their foot off the gas and failing to make the most of their opportunities.

This was a huge mental victory for Carlton. This was a danger-game and it absolutely had to win it to prove it’s moving beyond just a team with a bit of promise and some talented youngsters.

Although the match didn’t play out as prettily as the boys in navy blue may have hoped, they got the result and in the end and that’s what counts.

As for North Melbourne, without being too harsh because they did do well to regain a foothold in the contest, they should be really disappointed with its start. Once again, the Roos immediately put themselves on the back foot. Perhaps it’s a lack of focus, or maybe a lack of desire; either way, they shouldn’t need a quarter-time spray from the coach to get themselves going.

All in all, it was an interesting game that turned into a slog once the rain came pouring down and the Blues fast start gave them just enough of a cushion to hold on and earn a touch victory. One that could prove vital in their hunt for a first finals berth since 2013.

DAVID TEAGUE TAKING IT ON

Contrary to what we’ve seen from most clubs in recent times, Carlton is playing an aggressive brand of footy with more of an onus on the offensive side of things rather than the defensive. Teague is encouraging his men to take the game on and open things up at every opportunity in order to keep the opposition under constant pressure, even if every now and then they concede a cheap goal.

If nothing else it’s exciting, but it also utilises the talent Teague has on hand to the best of its ability and shows just how much faith his backline has earned.

Despite the loss of McGovern and the wet weather impeding the flow of their ball use as the game went on, it’s hard not to respect Teague and his men for how they are going about it.

CARLTON HAD SOME TRADE PERIOD

Immediately following the most recent trade period, all the talk surrounding the Blues was about missing out on Sydney’s Tom Papley. Ever since, it’s all been about Jack Martin and what a star the borderline All-Australian has been for the navy blue. However, the Blues also managed two other handy pickups in Marc Pittonet and Jack Newnes.

Firstly Pittonet; Carlton got him for nothing from Hawthorn – who funnily enough would love to have him back – and in the absence of an injured Matthew Kreuzer, has stepped in and been superb. Today epitomised his role at Carlton. Matched up against the premier ruck in the competition in Todd Goldstein, he battled all day long and nullified Goldstein’s impact across the ground. Pittonet lost the hit-out battle 27 to 41, but kept Goldstein to only 8 disposals while collecting 11 of his own. His effort today was stellar and served as a great example for his teammates to follow.

Now on to Jack Newnes and before you say anything, yes he cost his side a goal with a stinker coming out of the backline, but you’ve got to take the good with the bad. He finished the afternoon with 15 touches, five tackles and two goals. Something he’s brought to Ikon Park is his toughness and unrelenting tenacity around the ball, which he always had at St Kilda. However, in eight games with the Blues he’s kicked five goals, all of which have come at key moments in games and none of which have been gimmes. If wing/forward utility continues to be a goal kicker, Newnes will be another trade period steal for Carlton.

An unsung hero of the AFL, Ed Curnow has spent so much of his 165 game career flying under the radar. Unlike his brother Charlie, Ed is reliable, resilient and happy to go unrewarded. He spent the entirety of today’s match under the armpit of young gun and potential All Australian Jy Simpkin and boy did he give him a bath. Curnow kept Simpkin to just 11 disposals at 54% while collecting 19 of his own and nailing ten tackles to go along with six clearances. Enormous effort.

This was just a really fun match-up. Both players had their moments but Docherty probably got the better of Pittard in the end. It was great to see a forward play more of a defensive role on Carlton’s star defender. Pittard definitely nullified Docherty somewhat, but the man in his 100th game was still able to manufacture three rebound fifties and five inside fifties from his 13 touches.

Pittard, on the other hand, managed to kick a major and look threatening early on, however, his big moment came at the end of the third term when he knocked Marc Murphy to the ground, giving away an unnecessary free kick. The brain fade cost teammate Jared Polec a chance to give the Roos a one-point lead at the final break and proved to be very costly in the end.

ZURHAAR IS BETTER THAN… DE GOEY???

Cam Zurhaar is a talented youngster just oozing potential but today he stank. There’s no other way to put it. Eight disposals, one mark, six clangers and four free kicks against isn’t good enough. When you factor in his shocking miss running into an open goal in the first term, his day was downright deplorable.

Had Zurhaar kicked that goal the Roos would have gained some momentum and come within two goals of the Blues late in the first – perhaps they wouldn’t have then fallen into a 30-point hole? Without wanting to postulate any further, the simple fact is, he needs to be more consistent and can’t go missing for games at a time.

Last sighted kicking a cheap goal in the eighth minute of the first term. Ben Brown is as out of form as he’s ever been and his matchup with Jacob Weitering today didn’t help. He isn’t leading with any direction, he appears to have lost some size around his chest, and his effort is clearly lacking – he just looks gassed. Weitering beat him all day long, particularly in the second half when the young Blue took on the match-up exclusively. Brown was out-marked by Weitering three times in the final term on key occasions and was a non-factor from his seven touches.

Earlier today, one of my Mongrel colleagues stated Brown’s trade value was a mid-to-late first round draft pick. Personally I think that’s generous because the way the league is headed, it’s the wrong time to invest in a key forward. Ben Brown needs to figure something out and fast.