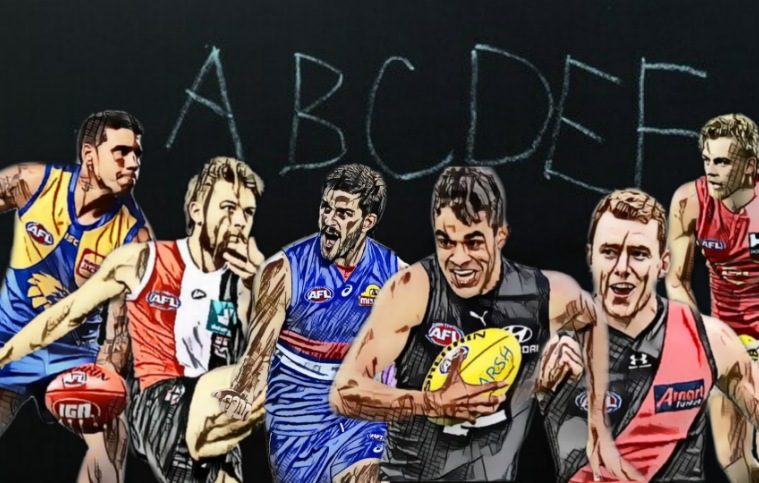 I reckon I could have made a good teacher. I can guide young people to help them learn. I can impart a bit of wisdom.

Are you still allowed to hit them?

If not, I probably wouldn’t make a good teacher.

We’re seven rounds into the season and we’ve probably had enough time to assess who amongst the 2020 recruits are travelling well and who have hit some bumps in the road at their new clubs.

Of course, some may not have been able to get their motor running a yet, whilst others may have driven straight off the road and into a ravine. We’ll assess them accordingly.

I’ve divided those who swapped clubs into the categories I grew up with in school, which is both showing my age and making a lot more bloody sense than the system I have tried to work out for the past ten years at parent/teacher interviews… or three-way conferences as they’re now called. Talk about wanky…

Anyway, enough dissing the school system. I’ll leave that to you guys once you have kids.

On with the grading!

All-Australian form and providing a killer instinct around goal the Saints have been lacking. Knows where the goals are, but rarely fails to do the team thing and bring his mates into the game.

Absolutely everything the Suns have wanted and more. Leads the league in tackles and is second in the league in contested touches. Now with the chance to be the player he was prevented from being in Adelaide.

Really making an impact at Princes Park, Martin has bobbed up at crucial times to be a potential match winner for the Blues. Great hands, excellent goal sense and beautiful vision make him one of the reasons for the Blues’ improvement this season.

Injury has robbed him of a spot in the top bracket, but his run and carry, as well as his versatility in playing inside and outside make him a valuable asset to the Saints.

Almost forgotten, he has reinvented himself as an effective run-with player and is starting to win plenty of the ball, himself. A success story in a success-starved location at the moment.

Started like a bullet on the wing and has now settled back into his more familiar role in defence. Has looked settled and relaxed in his new surroundings.

There were a few that thought Brandon Ellis headed to Gold Coast for cashola, and whilst I am sure he didn’t come cheap, his value to this club has been exemplified by his actions as a hard runner capable of winning his own footy. Have also enjoyed his hardness at the contest – something we didn’t see a lot of at Richmond.

Thrown forward last week in an attempt to fill another hole in the North Melbourne team, Walker was brought in to bolster their defence and has been a valuable asset.

Hard to move off the spot, I hope we see him back in defence this week… North need him there.

I’m surprised by how well Eddie has fit back in at Carlton. This is very much the Eddie Betts retirement tour, but he is pulling his weight and despite a disappearing act after quarter time against the Power, he has shown he still has plenty left to give this season.

Solid and dependable, Keath has been a great contributor for the Dogs and whilst he isn’t being mentioned in All-Australian terms by any stretch, his ability to either hold down a job on a key forward or zone off as an intercept player adds a fair bit to the Dogs.

Starting to round into form, I long believed that Kelly didn’t have to do the things at West Coast that he did at Geelong to be a star – the Eagles already have a very solid midfield. Kelly is there to complement it.

And that’s what he has done thus far.

Starting to become a commanding presence in the Saints backline. Was interesting to see him spray a couple of teammates for their defensive efforts last week. He’s obviously feel empowered enough to do that at his new club.

Currently fifth in the league in spoils; a great outcome.

Has added some real mongrel to the Bomber forward half and after starting the Bombers on the right foot in Round One, has continued to provide a bustling, bruising presence since. Occasionally a little too quiet, you never, ever doubt the effort he brings.

Has become a very good ruckman at stoppages, using his bulk to push opponents around. I have liked his ability to at least break even in the ruck contests but needs to work a bit harder to prevent his opponent having an influence around the ground.

Just going at the moment. Still looks heavy, but he always looked “stocky”, he is improving, however his first couple of outings were ordinary.

Started well but has quickly dropped back into a subsidiary role with the Dees. Not really having his endurance run used at the moment, but I think we will see a huge game from him soon enough. He works too hard on the outside not to be rewarded.

You reckon if he knew the Swans were keeping Papley AND picking up Sam Gray that he would have signed with them? I doubt it. Three small forwards and I reckon there are only two spots available. He is in competition with Sam Gray for that secondary small forward spot and the injury to Ben Ronke has alleviated some pressure.

Really hit and miss at the moment. Some days he has been almost invisible, and then bang – a six goal blast happens.

Some consistency is required and last weekend he started moving further up the ground to get more involved.

Hung in there against Brodie Grundy, was beaten by Todd Goldstein (he was – stop defending him!) and then had Tim English tear him a new one. Yep… Tim English.

Needs to compete around the ground – two opponents in a row have run off him too easily.

Solid but not spectacular, Friost has fit into the Hawthorn back six pretty well. Would like to see a bit more of that burst from half back he showed with the Dees… but with a bit more of an idea of what comes next.

Wasn’t expected to play at all after years of recurring calf issues at Freo. Has now played three games for the Dees, so anything is a positive. I don’t know what that says about the Dockers’ medicos, however…

Similar to Bennell, had not had a great run with injury, so to see him string games together is a bonus. Had his best outing of the season last weekend against the Giants.

Has looked serviceable when he’s got on the park, but two games from seven starts isn’t the greatest. Could end up being a valuable asset if Brodie Grundy needs a rest or gets a niggle.

Started okay for the Swans but suffered a groin injury and is still a week or two away from resuming. Could end up being a steal, but middle of the road for now.

Has added some depth and another solid contributor for the Blues. Not recruited to be a star, playing on the opposite wing to Sam Walsh, he has yet to really fire. Still, he has played every game thus far – I reckon he needs one 20+ disposal outing to really feel as though he is a valuable contributor.

Another club with an established ruck now houses Paddy Ryder. Problem is… not many teams play two rucks, and with Rowan Marshall the number one man, Paddy may end up second option, permanently. Needs to use that huge leap and get the Sainters off and running.

I was a bit iffy about Ah Chee and I reckon that being played as a defender might be a mistake – I don’t trust his disposal. What I do trust is his run and carry and reckon he could play well on a wing – pity the Lions have established wings in McCluggage and Robinson, with Zac Bailey drifting through there as well.

Four games for the lowly Crows has provided a good basis on which he can build. Out of the team the last couple of weeks, he needs to force his way back in and hit the goal per game average to retain his place.

Plenty of potential, but has failed to deliver thus far. Career low numbers in disposals and goals per game do not bode well.

Obviously been injured and is working his way into the team and into form. Ran at 100% efficiency last weekend but needs to start finding more of the footy, particularly as his return saw James Aish move to defence, and Aish was playing good footy on the wing.

The disappointment of the St Kilda season to date. Producing the lowest numbers of his career, but was arguably the highest profile of the five St Kilda recruits.

Is Sam Jacobs was viewed as the answer to the GWS ruck dilemma, we must have been asking the wrong questions. Has looked slow, and ha already lost that spot to the artist foremerly known as Shane Mumford.

I was high on CEY before the season, but not making the team due to not putting in enough work… that’s a worrying sign. Was good on debut, and then hurt soon after.

Was supposed to be the second part of a two-pronged running attack, with Ed Langdon. Well… Melbourne have been left with one prong (still pretty good) with Tomlinson being dropped.

Still plenty of time for Bonar but needs to find his place quickly in a North Melbourne team where nothing appears to be completely settled. With 9.5 touches per game in 2020, he needs to have a big outing soon.

Moved across town and is averaging a goal per game over four goals for the Crows. Not sold on him yet, but has also added to his value by playing backup ruck.

Dropping oil on himself, tearing a string… the big fella just can’t get a run at it. And the Hawks knew injury would be a big risk going in. Fingers crossed for a decent second half of the season.

Plenty to offer but cannot get a run. His one game saw just eight touches and no goals, but I reckon he could be handy as the season evolves.

Two games for the Bombers after being viewed as a possible permanent wingman. Injured, and has seen that chance handed to Brayden Ham instead.

Can’t get on the park. Some might think this rating is harsh, and that’s cool. I am actually a JJ fan, but if you recruit someone and they spend the first half of the year on the sidelines, I’m not sure how you can assess it as any sort of win.

Might end up being a factor at the pointy end of the season.

Moved to a club that had Rowan Marshall AND brought in Paddy Ryder. He is injury insurance at best now.

What has happened to Zac Smith. Buggered off from the Gold Coast to Geelong, saw his career grind to the halt, and then headed back to QLD and is only there in case something happens to Jarrod Witts.

Interesting pick up for Port. Interesting as in “unneeded”. I was surprised to see his name on their list.

So there we have it – I am sure you have your own upgrades and downgrades to add,  but I like to think I am a fair teacher… I look at the available information and don’t play favourites. If you can do the same, I’m happy to listen, and you know… maybe even change a grade here and there. Wink wink…