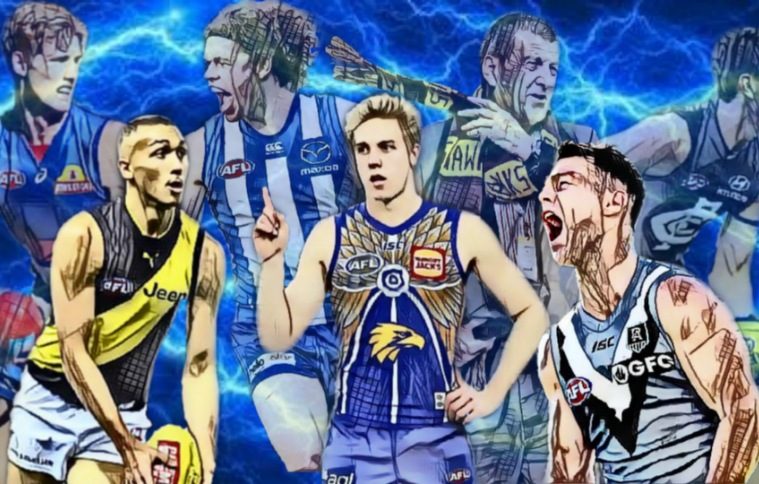 The Winners And Losers Of Round Seven

With that in mind, let’s check out the winners and losers of this weekend.

We rapt up Nic Nat’s big effort in the ruck against the Swans a couple of weeks ago. Grundy was just as impressive this week.

With the Cats pulling to within a couple of kicks in the last quarter, a perfect tap at the centre bounce to Jack Crisp set up a long ball to Jordan de Goey and the sealing goal. It started in the middle. It started with Grundy. And it ended the hopes of the Cats.

He has come so far in such a short time. It was interesting to see the side-by-side comparison with Brodie Grundy at the same age. Whilst I’m not sure we’ll ever see the same level of Mongrel in English that we do in Grundy, he is developing nicely.

A third game this season either setting or equalling a career best of 22 touches indicates that the Dogs’ decision to fast-track his development by allowing him to shoulder the load is paying dividends.

I could have chosen  Harris Andrews, but that would be too easy.

Darcy Gardiner held the fort for the Brisbane Lions and allowed the All-Australian fullback to range far and wide to dominate proceedings. For his efforts, Gardiner picked up ten intercept possessions of his own as he controlled the defensive 50.

There were some who thought that Greenwood and Ellis wandered off to the Gold Coast for cash, I’m sure.

However, what these two have added to the Suns has exceeded expectations already. Greenwood was amazing, with 23 touches, nine clearances and 12 tackles in what is becoming a typically tough effort. Add to that Ellis tearing around the wings to collect 566 metres for the Suns and all of a sudden their jumps to the rising Suns look like masterstrokes.

The injuries and absences piled up for the Tigers, and some questioned whether they could maintain the rage and remain contenders. The presence of young stars such as Shai Bolton makes that kind of speculation seem silly.

He was one of the driving forces as Richmond hammered the Kangaroos early, picking up four clearances and eight touches in the first quarter to leave the North Melbourne mids in his dust.

Nup, I’m going for the bloke that held the Port defence together. He was huge in the last quarter and as the Blues cleared one final time, it was Jonas taking the big pack mark and putting his team back on the path to the win.

How could I not have him in here?

Gray started to show signs of life in the win over the Blues, but with a minute and a half left, he handed the ball off, unselfishly I suppose, to Todd Marshall. The moment got the better of the kid, who missed from 12 metres.

The next time Gray got an opportunity, he had all the pressure on him. And he delivered. It’s what champions do.

He is becoming a bit of a fixture in this article each week.

Another dominant midfield display by the Blue and Red Bull saw him amass 14 score involvements. That’s five more than the next best, Sam Weideman. Everything Petracca touches is turning to gold this season, which is exactly the kind of influence Dees supporters knew he could have.

Potential no more – Petracca has well and truly arrives.

The Glendinning-Allan medallist, Kennedy snagged four of the Eagles’ nine goals and probably should have had more.

Looked dangerous right from the start, using his body perfectly to show that he has plenty left in the tank.

I may not have given him the credit he deserves this season (after wrapping him up all last season, I might add!) but after another stellar effort in defence, he makes the list this week.

23 touches travelling at the lazy 100% efficiency… not a bad day out for Shep.

The Saints’ grunt worker put on a show against the high-profile Crouch Brothers, racking up 26 disposals and adding a huge 13 clearances to his total.

Steele was huge against Patrick Cripps earlier this season and his performance tonight proved that he can match it with, and beat anyone in the guts.

Yeah, the Crows fell again but the stand-in skipper showed that he is ready to assume responsibility for this team.

At 23 years old, Doedee is the future of the Adelaide defence and you have to wonder just how good he’d be if he had not sustained that knee injury.

It maybe a little harsh on a young man, but Miers couldn’t get into the game after quarter time, double grabbing and inviting pressure more often than not. His decision to tap the ball on in the last quarter was a moment he’d like to have over.

When that sort of stuff comes off, it looks great. When it doesn’t, it looks as though you weren’t willing to take possession and take one for the team. Lesson learnt?

Absolute nowhere man at the moment, sitting in his nowhere land at half back, doing nothing… for nobody!

Nick Haynes on Charlie Cameron, Harry Perryman still hanging around in defence and a team full of stars that now sit at 3-4 with a return date against the premiers looming.

Leon Cameron is once again facing scrutiny as his Giants limp into their clash against the Tigers. This coming Friday night will determine the rest of the season for his team.

And perhaps his future.

Blakey looks as though it’s his first year in the league. It’s not – he was great last season, but if the wheels haven’t fallen off his 2020, they’re looking pretty wonky.

He had just four touches against the Suns this week and is averaging just eight touches and less than half a goal per game. With the potential to be anything, this season he is doing a whole load of nothing.

A horror season for the perennial Coleman contender.

Another goalless outing against the Tigers and three misses basically sums up his season. Not exactly aided by the delivery he is receiving… or not receiving, but good players make things happen and Ben Brown isn’t making much happen at all for his Kangaroos.

Once a dour defender who rarely lowered his colours, the Hawks captain is a far cry from the player he was a few years ago.

Unable to influence the play at all, he was led a merry dance by the Demon forwards.

Oh man… how do you cock that one up?

A powerful mark in the goal square, a poor decision and a date with a Tom Cole tackle meant that Tabs will be remembered for the wrong reasons in this game. A shame, because he was THE dominant man on the ground in the first quarter.

THE REPUTATION OF JACOB WEITERING, OR DAVID TEAGUE

I know the Blues fans won’t like this one, but hear me out.

Weitering is a very good defender. Some would call him elite, but when the biggest and baddest forward is getting hold of your team and is the difference in the game, do you think David Teague may have tried his best defender on him?

All-Australian defenders take the best forward when he starts to get on top and Teague opted not to give Weitering a crack at Charlie Dixon. Did it cost them the game? Did David Teague not have faith in his young star?

Was challenged this weekend. After racking up 31 touches in Round Six, he had the Saints’ captain to keep him company.

He responded with just 12 tonight. Geary picked up his second victim of the year, having already put away Sam Docherty.

I’m not a fan. Disposals for the sake of disposals.

He had 26 possessions and did bugger all with them again. Check his metres gained numbers – 133 metres. That’s way too much sideways and backwards possessions.

Finally, just wanted to offer the condolences from all at The Mongrel Punt to the family of Shane Tuck, who passed away earlier today. may he rest in peace.

So there we have it. Have anyone else that needs to be added to either section? Hit us up in the comments, or catch us on our socials.