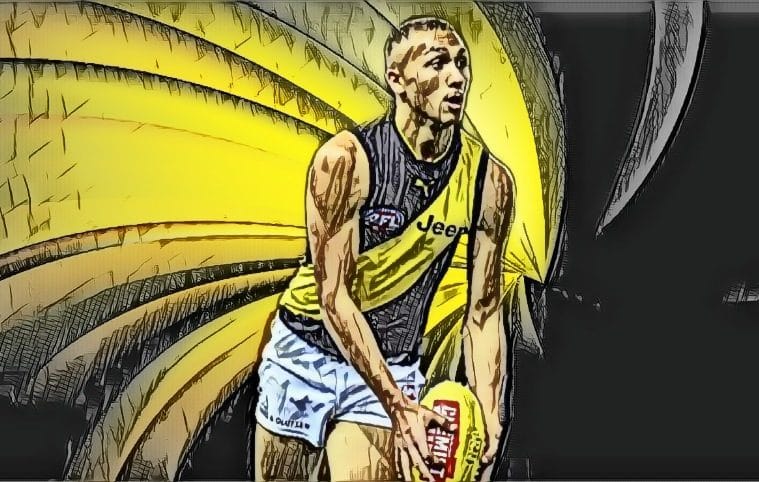 North Melbourne aren’t just facing a downward spiral in 2020, they’re plummeting downwards at a rapid rate I can’t even begin to describe what an unmitigated disaster they are heading down towards.

It’s not entirely their fault. They are not fielding their best 22. Ben Cunnington is out, Jack Ziebell lasted less than half a quarter before his hamstring pinged again. Nick Larkey is more a critical component than outsiders realise, and Ben Brown – confidence and all – is suffering for it. Cam Zurhaar was a late out tonight. But that’s just the tip of it all.

What North will be faulted for is one – the poor skills coming out of half back – and two – the lack of accountability in the first half. Richmond had 10 less disposals than North Melbourne in the opening term, but had 18 inside 50s to one. The result was 4.3 to nothing at quarter time. Credit where it’s due to Richmond, because they suffocated North in their defensive half.

North’s inability to get the ball even forward of centre is the reason why they only had the solitary inside 50 in the opening term. Most of it is through the design of Richmond’s defence. But North certainly gave them a helping hand with miskicks and handballs that went a couple of metres left or right to the desired target, which resulted in some easy shots on goal to the Tigers.

It was the first time since 2010 that North were held scoreless in the opening quarter. The opposition then was a St. Kilda team at the peak of their powers and the Saints ended up drubbing them by over 100 points. A full-strength Richmond team would’ve given the Saints a run for their money in terms of the margin, but with big names out of the team – Cotchin, Prestia, Houli, Edwards just to name some – in conjunction with shortened quarters, it meant that getting a margin of that magnitude was a tough ask.

If you need proof, look at Ben Brown skimming kicks that he would’ve kicked two years ago. He’s horribly out of form and it’s a combination of no Nick  Larkey to take some of the heat and a lack of confidence because North go to him every time and to paraphrase Damien Hardwick from last week: They throw 75,000 blokes onto him.

In the second half, North recorded 19 inside 50s to Richmond’s 21. They also won the contested ball count by 21 and won the clearance count by 12. Inside footy is not an issue, but it’s their ball movement that has been the issue for the past month. Basic turnovers by both hand and foot completely crucified North Melbourne on Saturday night.

I love how Kyron Hayden attacks a contest – you know they’ve got someone who will fight for the cause. Look how he knocked himself out for goodness sake, running back with the flight to a contest between two 200 centimetre-plus key forwards. However, I don’t think he had an effective kick tonight – a lot of them went to Richmond players – kicking is a big deficiency in his game, as it is for a few of his mates. Just thought I’d highlight that as an example – it was a relief to see him walking about after being stretchered off.

So let’s talk Tigers. I mentioned above that they are missing a few of their best 22. They also had Tom Lynch playing with one functioning hand, Josh Caddy hobbling off midway through the second quarter with a hamstring injury and Dustin Martin… okay, he kicked two goals and had 16 touches but had Luke McDonald getting into his head for most of the night, he looked quite frustrated all throughout the night.

But there were quite a few players who I wouldn’t exactly call household names that starred on this night. Derek Eggmolesse-Smith running across half-back was excellent. He had 23 disposals – 17 of those kicks, along with four rebound 50s, six marks and four intercepts at 83 percent efficiency. He slotted into the half back line seamlessly in Bachar Houli’s absence. Jake Aarts played himself a good game, unfortunately a couple of very easy misses in the first half really dampened what should’ve been a good night – 2.3 should’ve really been a bag of four or five, but nonetheless, he looked very dangerous as small forward – leads well and can kick some nice crumbing goals.

Shai Bolton looks a much-improved player in the middle – five of his 19 disposals were clearances and also had seven inside 50s and seven score involvements. Jason Castagna was seen mopping up loose balls across the defensive half and did some very nice things with the ball in hand – 18 touches, six marks, five inside 50s, eight score involvements, six intercepts and a goal – I think he looks better up the ground as opposed to staying at home.

Noah Balta, I saw bully Ben Brown off the ball a fair bit. It was nothing malicious, but just a little bit of roughhousing to heap a bit more pressure on the North spearhead. He played a solid role and enabled the likes of Dylan Grimes and Nick Vlastuin – who had 16 marks and 17 intercepts between them – to shut down North’s weakened forward line with a bit more ease.

I will also point out the work of both Marlion Pickett and Jack Higgins – whilst neither were very flashy with the footy in hand, both knuckled down and had themselves decent, workmanlike games. Likewise Jack Graham – I bloody love him, he’s a tackling machine – another nine from him on Saturday night – and just plays the game, no fuss attached.

Lastly, I will applaud the pair of Ivan Soldo and Mabior Chol for negating Todd Goldstein – who is still a top-five ruckman in the league. It was breakeven in the hitouts for Soldo – 26-23 in the hitouts in favour of the North big man, but Chol’s efforts forward of centre were top notch. He’s another player that will work hard whenever he gets in the team.  He kicked two goals from nine touches, four marks and three tackles.

Before I highlight some of North’s better players – some things I didn’t like. I don’t know why Aiden Bonar is playing in defence and I very much don’t like it. The man is an inside midfielder and in a team that is missing Cunnington, Anderson, Ziebell and with Jy Simpkin battling an ankle injury for the most part of the game – throw him in the guts!

Shaun Higgins had 36 disposals, which shows that he worked hard for his footy. But did he do much with it? He had four clearances, four score involvements, five intercepts and ZERO inside 50s – getting numbers that big should warrant a big game, but I don’t think he actually did much with it. A lot of sideways kicks and one-two handpasses?

Shaun Atley had another game where he doesn’t do much – how many does that mark down for you North fans? That bloke should be suspended for impersonating an AFL player and I’m not even joking about that one. Jasper Pittard didn’t introduce himself to the footy until the second half and the likes of Jamie Macmillan and Mason Wood were also ineffective.

But, looking at the brighter side of things, Josh Walker looked very dangerous in the air in the first quarter as a defender. He went forward and although dropped some easy chest marks late, he looked more threatening than Brown. Five of his eight marks were contested and kicked 1.2 for the evening. Curtis Taylor also looked lively, with 18 disposals, six marks, five inside 50s and four scoring involvements.

Marley Williams got a lot of the footy, which is pretty much expected when the team concedes over 50 inside 50s, but I felt like he worked hard and did what he could to prevent the margin from blowing out even further. He had 20 disposals, six rebound 50s and seven intercepts. I also didn’t mind Ben McKay as the late in for Zurhaar. He played on Tom Lynch for most of the night, and whilst it’s easy to say that Lynch was at a disadvantage, McKay did a good job considering the amount of times it went to his direct opponent.

Trent Dumont played a very solid game in the middle – 25 disposals, five tackles, four inside 50s and three clearances and Aaron Hall also worked hard in the middle and tried hard for most of the night.

That’ll do it from me. Richmond have a couple of wins on the board, and with a list missing stars, will be looking to make it four in a row in Blacktown next week in a big Grand Final rematch with the Giants – if anyone can win with a depleted list, it’s the Tigers. North take on Carlton next Saturday afternoon at the Gabba – hard to see them avoiding six losses in a row the way the Blues have been travelling the past month and a bit.

But 2020 has dished up some weird stuff this season, so expect anything. Until next weekend footy lovers.

Like these reviews? Want more of what the Mongrel can offer? Join as a member and get access to weekly wingman, defender and overall player rankings as well as additional members-only columns, and early access to all Good, Bad, Ugly reviews. It’ll cost you 40-80 cents per day and you’re helping our site grow.