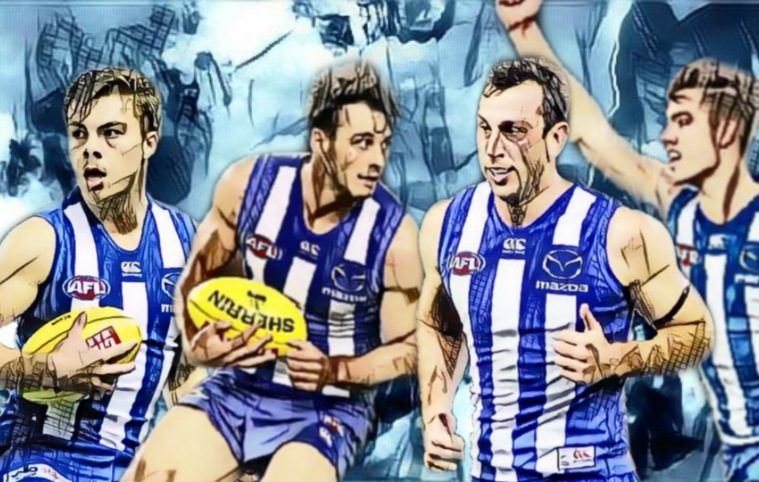 Arden Up! Time For North To Make A Stand

Right, this is not going to be pretty.

I came into the 2020 season keeping a close eye on the Kangaroos. I felt they had a list that was capable of significant improvement and through the first two games, I was feeling pretty pleased with my keen eye, thinking we may see North hit the finals with a bit of a head of steam.

A fantastic come from behind win over St Kilda saw them restrict the Saints to just one goal in the second half, and whilst many were questioning the drastic fade out of their opponents, perhaps the slow start of the Roos should have been under a little more scrutiny.

In Round Two, they compiled one of their more impressive wins of the last few seasons, besting the Giants on the road. Players like Shaun Higgins, Jy Simpkin and Jared Polec showed their highly-fancied opponents a clean pair of heels as they eked out the kind of win synonymous with their culture.

Even in Round Four, we saw a brilliant finish and four goals in a rush almost enough to get over the flat-footed Hawks.

However, since then we have witnessed a team devoid of run, devoid of confidence and devoid of an avenue to goal. In Rounds 5-7, the Kangaroos have averaged a measly 38 points per game. This includes the abysmal total score of just 23-points against the Tigers this weekend where Richmond just strangled the life out of a directionless North Melbourne team.

Where has it all gone wrong?

At 2-5, some may argue that the damage is irreparable done in 2020 and the Kangaroos should close up shop and concentrate on 2021. With just ten games remaining in the shortened season, the Kangaroos would have to win seven or eight of the next ten to have a chance at playing finals. Based on what we saw against the Tigers, you have to wonder if they’re at all capable.

So, what is the problem at Arden Street? Where has this famous shinboner spirit gone, and how do they reignite the fire that always saw them rise to a challenge and never, ever throw the towel in?

As Jack Ziebell limped off the arena, followed closely by Jy Simpkin, the world got a little darker for the Kangaroos supporters. Whilst Simpkin returned to have a minimal impact, the North Melbourne skipper sat the rest of the game out, placing him on a growing injury list that has seemingly crippled the club’s 2020 campaign.

Rhyce Shaw attempted to rob Peter to pay Paul, throwing both Josh Walker and Jasper Pittard forward to provide a marking target and make the Tigers’ expert interceptor, Nick Vlastuin, play accountable football. One move worked and the other didn’t, but in doing so, the moves left the defence horribly exposed.

Robbie Tarrant was left to try to hold things together with the football equivalent of sticky tape and clag as the Tigers swarmed, smelling blood, and attacked relentlessly in the first quarter. Meanwhile, names like Jamie Macmillan, Marley Williams and Ben McKay asked to do huge jobs to hold the fort.

First year player, Kyron Hayden was charged with more responsibility than he was ready for, and his kicking stats indicate that he is a fair way off being a reliable disposer of the footy at half back flank. His courage will never be questioned after he ran back with the flight to incur a sickening blow at the hands of the charging Tom Lynch, but his kicking… if it only it matched his guts.

Jared Polec hacked the footy, as did Jasper Pittard and Jy Simpkin as the Roos continually turned the footy over and ended up chasing tail in a way they haven’t since Wayne Carey took the boys out games all those years ago.

This is not how the season was meant to play out. It is bordering on disastrous for North.

There will be quite a few that will be looking for blood over the coming 48 hours. You can almost sense the vultures circling, looking to pick the bones of the still breathing North Melbourne side as they stagger and look as though they will topple over.

These buzzards will conveniently forget the injuries to key personnel I have listed above.

They will neglect to mention what Ben Cunnington means to this side and how the forward combination of Brown, Larkey and Zurhaar have the potential to be very effective over the long haul.

They won’t mention how Jed Anderson’s crash and bash style releases Trent Dumont to the outside and feeds Jared Polec the easy ball.

And they won’t bring up how North have been forced to ask so much of young players like Curtis Taylor and Jack Mahony well before their time.

And nor should they mention any of that. No one owes North Melbourne any favours.

Football is not a business of excuses. The good teams are able to overcome a raft of injuries. They have a system that sees one soldier fall and another take his place without the kind of chaotic disruption you see at North Melbourne at the moment. They are able to take the injuries and loss of talent and still keep winning. The Tigers sit fourth, for crying out loud.

In the most recent Kangaroo capitulation, Richmond had a list of outs that made North’s look tame in comparison. Prestia, Houli, Edwards, Astbury, Cotchin…and with Josh Caddy going down with a hamstring injury you could give them an out too if you wanted.

But they wouldn’t take it.

Where was the panic from these guys? Where was the disappearing act? It is basically a quarter of their team combining for under 50 games. They handled the heat and applied heat of their own. Why were they capable and the Kangaroos not?

North Melbourne are a professional football team. It may come as a surprise to many after watching their efforts against Richmond, but they are. It’s time they started carrying themselves as such.

I understand the pride they carry in being the underdog and being the team that’ll prove everyone wrong with their “shinboner spirit” but the time for wearing the perennial battler badge with a sense of pride is over. It is weighing them down like an anchor. And their ship is sinking in 2020.

In six days, North Melbourne face off against a Carlton side that can be very, very good or quite ordinary; sometimes in the same game of footy. If they plan on making any noise in 2020, the Kangaroos have to make a stand and stop hiding behind inexperience and injuries as an excuse. Their efforts against an admittedly good Richmond side were embarrassing, the result… deplorable.

For a team that came into 2020 with finals aspirations, North are looking down the barrel of another bottom eight finish and it is going to take a concerted team effort to drag them out of this position.

There has to be a time this club makes a stand. Sometimes you have to be hit hard in order to find out whether you have what it takes to get up and keep going. The Kangaroos have been knocked down by the Tigers – hard. They have been hit by injuries – harder. They have limped away from a two-goal performance beaten and with their pride wounded.

Forget what happened against the Tigers; it is how this club responds that will be interesting.

Who thought that in Round Eight we would see a club fighting discover who they truly are? That is the challenge that is before North Melbourne with the Blues on the horizon.

We’re about to find out.

Hey, how about jumping on board and joining The Mongrel? 40-80c per day gets you access to all our player rankings as well as additional, members-only content weekly. Click the pic below and join us…. join us… join us…