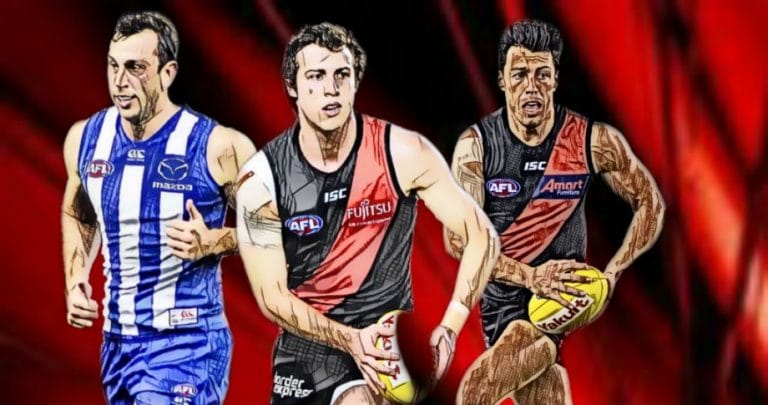 Footy at Metricon Stadium at lights often means ugly footy. Indeed, this was the case in another slippery affair, this time between the Dons and The Roos. However, despite the conditions creating an error-ridden game, the Bombers shot into the top four due to a case of taking their chances and being a lot more sure of hand than their opponents.

Here are the players who delivered and disappointed.

This kid can play, and dare I say he is a roughie for a half-back All-Australian gig. Ridley is composed, collected and clean; all hallmarks of a gun defender. Accumulating 18 bites of the Sherrin at 83% efficiency, Ridley injected spades of transition movement for the Bombers, launching forays forward with his good foot skills.

But most excitingly, Ridley matched his foot skills with seven superb marks, proving his aerial pursuits are just as canny, particularly given the slippery conditions. The Dons have found a winner in Jordan Ridley, here’s hoping for their sake that he continues his top notch form. What this means for the Bomber defenders waiting in the wings remains to be seen, but given his form this position in the back six looks like his for the foreseeable future.

Ever consistent, ever composed, Andy McGrath continues to cement himself as one of Essendon’s best with another trademark performance. 25 touches, eight huge tackles and ball use at 84% efficiency on a dewy track is not bad at all for a bloke who has only played 70 odd games in the big league.

Earlier this season, many speculated that McGrath would be the player the Bombers needed to lift most and he has not disappointed. There is always a lot of pressure on number one picks and after a couple of years finding his feet in the Essendon system, McGrath is looking every bit the potential star of this team.

I sniff a Brownlow in the not too distant future.

Goldy has gone from looking as though he may sign elsewhere last year, to producing some of the best football of his career this year. How times can change. North’s first-choice ruckman destroyed opposition big-man Andrew Phillips with an all-round game. Racking up 19 touches, winning 30 hitouts and steering through a nice goal were just some of Todd’s highlights, but it was his gut running throughout which impressed me the most.

The man may be aging, but like fine wine, some things get better with age…and North will hope that is the case for their number 22.

It appears as though he has found his calling. Often a whipping boy of the North Melbourne faithful, his role as a lockdown midfielder/defender have produced excellent results. Dylan Shiel is a star, but McDonald managed to turn the lights out on him in this one.

Probably could’ve done without the Covid-taunt to Conor McKenna, though.

Had a party playing on Ben Brown, destroying the North spearhead in virtually every one-on-one encounter they tangled in.

In many ways, Brown is the ideal match-up for Hooker. He can match him on the lead and can overpower him body-to-body. You’d have to think he had a big smile on his face when there was a bit of dew on the grass as well.

It was a night made for Cale Hooker.

He played a pretty decent game, but it was the parting shot that was best. In regard to the rivalry between the clubs, Smith gave the Roos a backhander as he was interviewed after the game.

“It’s a bit of a rivalry build up for them, but for us it’s just another game.”

I will not be the first to say Ben Brown struggles in dewy, slippery conditions, and I won’t be the last. We all know North’s key forward is one of their premium assets when it comes to applying scoreboard pressure, but he simply struggles to adapt to conditions which are not ‘just right.’

Brown’s ability to outplay his opponents is mostly reliant on his strong hands, and naturally marking is harder when the ball is slippery, however the delibery to him has been appalling this season and the North Melbourne mids have a lot to answer for.

That’s not to take the shine off Cale Hooker’s efforts. With Essendon’s defensive lock shutting down Brown from start to finish, Brown struggled to find space anywhere near goal. Indeed, big Ben needs to work harder to become more versatile and a forward, ensuring he is not a ‘one trick pony,’ only capable of firing under good conditions in a closed Marvel stadium.

A late inclusion, the former Magpie had a shocker. In a game which required quick and constant defensive transition, Williams was hardly sighted, finishing with a measly five touches across four quarters. I’ve always believed Williams has the potential to become a Dane Rampe-like player in terms of his impact with the footy, with his dart-like kicking capacity, but the more I watch him the more I question that belief.

If Williams churns out similar performances at top level as seen tonight, his days may well be numbered by the end of the season.

Arguably an unnecessary and silly inclusion given the conditions, Tom Campbell provided very little to North’s outfit. To me, Campbell has always been a polarising player – is he best suited to the ruck or the forward line? Who knows? Although, it would be harsh to give the man a zero in his own right, given his height and size simply created a bleak scenario given Goldstein being on primary ruck duties.

So, perhaps the zero should go to North’s selection team instead.

I can see why he was frustrated. Luke McDonald was diligent in his work to curtail his influence, but the hip and shoulder Shiel hit young Roo, Curtis Taylor with was both silly and unnecessary.

It was a day of big hits, and Shiel’s on Taylor should probably earn him a short holiday. Maybe he could take a lesson on how to bump from Cam Zurhaar?