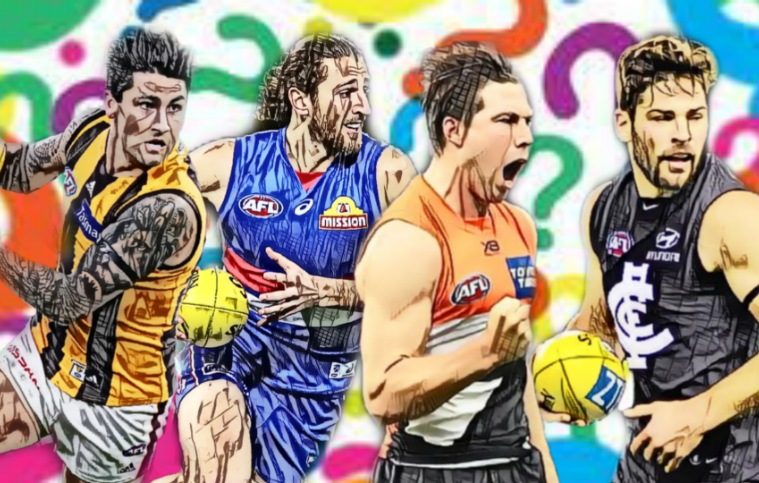 Ten Things I Learnt After Round Four

TEN THINGS I LEARNT AFTER ROUND 4…

I’m not sure I can listen to a Western Bulldogs game if I know Bruce is commentating. Don’t get me wrong. Bontempelli played a cracker of a game, but every time Bruce mentioned his name you could hear that same inflexion in his voice that was once reserved for past loves of Bruce such as Chris Judd, Jason Akermanis, and more recently “Cyril” (note that he only ever referred to Cyril Rioli by his first name).

There were even a couple of passages of play where “The Bont”, as Bruce likes to call him, was certainly on screen but didn’t get hands on the ball but that didn’t stop Bruce mentioning him. Bruce has never been good at hiding his feelings. I wonder whose next. I’m nominating Matt Rowell and possibly Connor Rozee as Bruce’s next loves.

2 – Toby Greene may never be awarded a freekick again for the remainder of his career.

Observing the Giants v Magpies clash was amusing to see just for the decisions made which involved Greene. It’s so obvious now that the umpires always think he’s up to no good and will always err on the side of paying a free kick against him. For the most part, they’re probably right in their assumption, but I digress.

There was an instance where he made no contact in a clash with an opponent but his mere proximity to the player in question was enough to award a kick the opposition’s way. Even Toby has resigned himself to this newfound infamy and simply smiles when it happens, probably because he knows he’s so good that he’ll still wind up being one of the best players on the ground. Sadly for him, however, it probably won’t be enough to earn Brownlow votes.

3 – Alarm bells ringing loud for the Eagles as they managed just 6 goals for the 3rd week in a row.

The much fancied Eagles coming into 2020 seem all at sea. The lack of scoring power has to be the main concern. Once again, they managed under 40 inside 50’s (36) and with a midfield that boasts the likes of Gaff, Shuey, Yeo, Kelly, Sheed and Naitanui, things are not making sense. These guys are all A-graders but the level of output from the team is anything but.

I’ve been harping on about the fact it appears that playing a month of football in Queensland conditions clearly has not been to their liking, but it would be a sad state of affairs if their form line suddenly reached the heights we’ve come to expect once they begin playing football in the Perth hub. Whilst 2020 has been a crazy season like no other, I’m certain their fans would be frustrated to learn that their form on the road isn’t a true reflection of their capabilities. It will certainly be interesting to see how they go in WA, and provided no Victorians sneak in and spread COVID-19, it seems very likely they’ll be doing so before a decent sized crowd of fans.

4 – The Tigers’ reign of superiority appears to be over.

Am I wrong to write the Tigers off a little prematurely? Perhaps, but they don’t look great. It’s a similar story to the Eagles with their A-Grade midfield in Cotchin, Prestia, Edwards and Martin, yet the Saints ran rampant and never really gave the Richmond boys a look in on Saturday. And the Richmond back line were soundly beaten in more contests than what I would deem the norm by their lofty standards in recent times.

And speaking of West Coast, these two teams are set to meet this Thursday in Queensland. I feel the Tigers should fancy themselves as the Eagles aren’t scoring heavily. The loser of that game can almost say goodbye to 2020. This is another game I won’t have a clue as far as knowing which way to tip.

5 – Has Levi Casboult taken longer to reach his peak than any other AFL big man in history?

Taken as a rookie in the 2010 draft, there weren’t huge expectations on Levi. For many years Carlton fans saw glimpses of his talents. His contested marking has always been a feature, but so too was his awkward kicking style that was often very wayward. His career seemed to be drawing to an early end in 2018 under Bolton as he spent most of that year playing for the Northern Blues during a year in which Carlton managed just two wins. It wasn’t until he was given an opportunity down back in 2019 where he all of a sudden found himself enjoying his footy, taking pack marks and possibly relishing not having the pressure of kicking for goal.

He turned 30 earlier this year, and now his importance to Carlton has become immeasurable. He’s a high marking forward who has kicked eight goals in his four matches this year. He also has the role of backup ruckman and his improved kicking has now made him truly dangerous. As a Blues man myself, I have deep admiration for his perseverance and passion. He seems to be smiling on the football field more than ever. I’m sure there are many who now take him seriously that never would have before. Carlton people have learned the art of patience, and watching Levi making his mark is a nice reward. He was once a laughingstock due to his poor kicking, but I don’t think too many would be laughing now.

6 – Fremantle may be better than their 0-4 start suggests.

Looking through all the Fremantle games, one thing is clear, and that is they’re not a terrible team. They could’ve easily snatched a victory in at least three of their games, the other being against Port who, on current form, seem to be the measuring stick of the competition right now. I believe Jesse Hogan will still prove to be a very handy pickup, and may just be the missing ingredient up forward for now. They still have Fyfe, Walters, an aging but reliable Mundy and I also rate Lobb in the ruck.

Any teams coming up against the Dockers should never assume the four points. They’re fighters and have some good kids. They seem to be running into teams who are in peak form with losses to Essendon, Port Adelaide, Brisbane and now the hot Suns. That’s a pretty tough draw. They come up against the Adelaide Crows next week so I expect Freo to open up their account. And once they get a taste of victory, I’m certain there’ll be more to come.

7 – Adelaide may be a worse side than their 0-4 start suggests.

The 37-point loss to Brisbane on Sunday was made to look more respectable than it should have been due to the Lions’ inaccuracy in front of goal. The Crows showed some fight in the 3rd term with the likes of Taylor Walker getting involved and the hope was that if they carried that into the final stanza the result could have gone their way. But, as a lot of underperforming teams tend to do, Adelaide faded in the last quarter with the Lions managing an inaccurate 3.8 in front of goal .

The scary part for the Crows was they conceded 61 inside 50s while only managing 28 themselves. That’s a smashing in anyone’s language and it’s a great concern. So many of the stars from their 2017 year who remain on the list seem a shadow of their former self and it’s as though the soul has been ripped out of the club. They just seem to be going through the motions without purpose. Matthew Nicks has a monumental job trying to resurrect their fortunes. Surely the powers that be at the Adelaide Crows Football Club must now be contemplating that dreaded “R” word??

8 – There’s something not quite right with Geelong.

Am I wrong to be thinking Geelong should be so much better than they seem to be? Or have I simply over-rated them? They still have Dangerfield playing great football. Ablett is aging but an aging Ablett would still get a game for most clubs. There’s Selwood although maybe he’s past his best. They seem to be lacking in the ruck department. I’m fairly certain Chris Scott has high expectations for his club this year, but from what I’m seeing so far, they’ll be very lucky to make the eight.

Yes, they won in Round Four, but I’m certain Melbourne won’t go far this year. If they fall short, it’ll be interesting to see what they do with the likes of Ablett, Taylor, Selwood and even Hawkins. It sounds harsh, but if you finish tenth with an aging list, tough decisions have to be made. And I would be looking squarely at the coach’s box as well. Let’s face it, they haven’t exactly been flying that high since 2011, and this is his tenth season.

9 – Chad Wingard might be back to his Port Adelaide best.

Look out everyone, the Chad is back! It was always going to take a little while to settle into a new club, and he has suffered a few injury setbacks along the way, but Hawks fans would be loving what they’re seeing now. He’s got his flair back and watching him outrun Tarryn Thomas in the last quarter and then kick the goal tells me he’s lost none of his pace as well. Any teams coming up against Hawthorn would be wise to make him the man to keep in check.

It seems he’s the most dangerous forward running around at the Hawks these days. And with Mitchell and O’Meara both firing, there’s enough supply going in there (45 inside 50’s to just 33). Clarko has his men winning three out of the first four. There is simply no bottoming out under his tutelage. The man’s a freaking genius. They’ll probably play finals and Chad will be their highest goalkicker.

Two separate incidents on the weekend saw what appeared to be innocuous contact resulting in broken bones. The first one was Zach Merrett’s clumsy punch to Jack Silvagni’s ribcage which resulted in a broken rib and a pierced lung. Looking at video of the incident, it is surprising to say the least that the result was so severe. It’s the sort of thing that seems to happen several times a game. Player gets chased, lays off the football, and contact is made shortly after. I’m sure Zach is as shocked as anyone with the result.

The other incident involved Tom Stewart and Tom McDonald. It was a centre bounce scenario where players at either end are jostling and bumping into each other as they do, and next thing you see Tom Stewart trudging off with a broken collarbone. Once again, the bump was reasonably strong, but it’s the sort of bump that happens several times a game with little or no consequence. So my suggestion is no more water in the drink bottles. It’s time to fill their drink bottles with milk, preferably the high calcium varieties