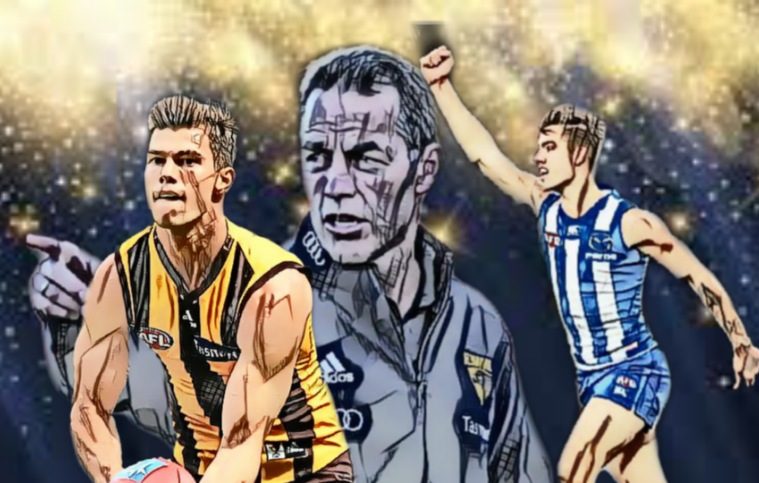 A Not-So Quick Yarn About The Hawks And Kangaroos

It’s been a strange start to the season, commensurate with such a strange year.

The first four weeks have been a tipster’s nightmare and at the conclusion of Round Four, it’s impossible to pick who is going take the chocolates come season’s end.

But all that’s for later. Right now, there’s a game that needs a review – welcome to a not so quick yarn.

It was a bizarre game, this one. The Kangaroos dominated possession for the majority of the match-up, yet failed to effectively penetrate Hawthorn’s stalwarts down back until the last ten minutes of the final term, and when that dam finally broke the blue and white wave washed over the Hawks and almost kept them under.

Sadly for North, it was too little too late, with Hawthorns five goal fourth term lead just enough to sustain the late North onslaught and allow the Hawks to limp away from a contest they should have won easily and give their coach plenty to think about, including the state of the game, itself. The final score was Hawthorn 8.10 (58) to North Melbourne 8.6 (54).

Among the best for the Hawks were Chad Wingard, James Worpel and bizarrely, Ben McEvoy, despite only collecting two possessions for the entire game (more on this later). Meanwhile, the Kangaroos were led by emerging star Jy Simpkin, an ever bashful Shaun Higgins and a reborn Todd Goldstein, continuing his excellent 2020 form.

It was all set for a routine Hawthorn win. After a slow start, the Hawks were first to establish scoreboard pressure and, despite North’s stubbornness, their defence consistently mitigated the Roos’ forwards throughout the first three terms.

North Melbourne dominated possession but lacked creativity. The North Melbourne plan of going long to their talls failed too often to score consistently with Ben Brown barely able to get a touch and the rugged Cam Zurhaar  struggling to break the shackles.

Hawthorn was far more effective in their ball use, penetrating the forward fifty at speed and were rewarded with a myriad of opportunities.

With ten minutes left in the final term, the Kangaroos finally looked spent and you had to wonder whether this would be a nice percentage boost for the Hawks. However, the Roos persisted, and suddenly converted a pair of goals to cut the margin to under 20 points. At this stage, Hawthorn had clearly mentally packed it in and taken the four points – and they was very nearly punished for this hubris.

The vast majority of the games excitement was packed into this ten minute period. The Hawks were caught napping and once North made it three goals in a row, the Hawthorn composure was nowhere to be seen.

However, the old adage held true – it was too little, too late. The Roos got within four points and looked set to overrun their opponents, but in a shortened quarter, the clock beat them and that was all she wrote.

18 touches in the shortened format to go along with three goals for the third time this season. Chad is looking like his former dual All-Australian self and Hawks fans have to be excited about it.

He popped up in key moments last night, including a blistering goal on the run early in the last quarter with Aaron hall hot on his tail and was clearly Hawthorns best.

Big Boy too much for Big Ben

Ben McEvoy put together perhaps the most influential two possession game we’ve seen in years. He held North’s leading man, Ben Brown to only three touches, no marks and a cheap goal. The match-up raised some eyebrows pre-game, but McEvoy quickly alleviated any doubts. He consistently stifled Browns aerial abilities and prevented him from getting a clear run at the Sherrin. However, North’s delivery inside 50 also has to take some responsibility for just how poor they were.

It’s been great to see McEvoy excel down back early this season and credit has to go to Clarko for consistently getting the best out of him after some early hiccups with the experiment, particularly against the Cats.

Simpkin is a star

Up from 20 possessions a game last season to over 25 this year in the shortened format and three goals in the first four weeks – young Jy is going from strength to strength. North has been hunting an elite player via free agency for a while now, but perhaps it’s next big star will rise through its own ranks.

The way he lifted this team in the final stanza, with Tarryn Thomas and Curtis Taylor doing their utmost to drag North over the line should be commended.

YOU JUST CAN’T HAVE IT

There’s only one way to describe North Melbourne’s season to date: up and down. The young-ish side has shown flashes of their true capabilities, particularly against the Giants a fortnight ago, however, they have fallen flat in the past two weeks. The Roos’ late comeback proved once again that they capable of quality football (albeit against a half asleep Hawthorn), but players like Zurhaar and Thomas can’t go missing for three quarters of the game.

This is more of a league-wide issue, but Hawthorn was nearly another casualty of poor kicking in-front of goal. North Melbourne had no right to make the game as close as it was, but the Hawks left the door open when it failed to convert some sitters in the second half. Unlike Collingwood, it didn’t cost them the four points this week, but next time they might not be so lucky.

As a quick side note, I’d be remiss not to mention the Lions and their 23 minor scores this round. You’d think without fans the conversion rate in front of goal would be up across the board, but this hasn’t been the case and I’d love to know why.

Remember after Round One when the media was pumping up shorter quarters and no crowds being the reason behind the more accurate scoring? Guess that is well and truly out the window now?

North Melbourne had more disposals, contested possessions, clearances, marks and a higher disposal efficiency than Hawthorn. More than anything, this game was one for the “stats aren’t everything” folks.

–  Are we sold on the Hawks? Four weeks in and we’ve seen two great games, one stinker and whatever last night was. They’re now perched in the top four and going 3-1 against a tough draw is nothing to sneeze at. However, it’s clear the Hawks are far from flawless – how realistic are their premiership hopes?

– Shortened quarters and longer breaks – are we serious? I’ve never seen so many players standing around having a chat before the start of a term. Would love to see more footy and less waiting around.

– And what do we make of Alastair Clarkson’s post-game lamentations about the state of the game? Is this one of the game’s pre-eminent thinkers having enough of league honchos toying with the game in terms of not rewarding the tackler, or were these the words of a coach who was venting after his team almost coughed up a five goal lead half way through the last quarter?