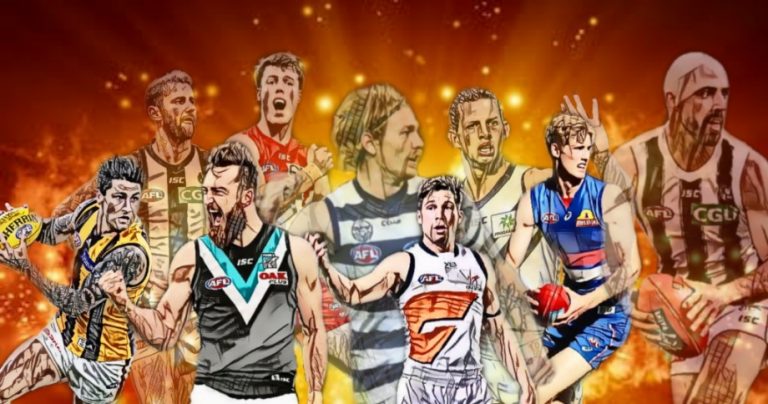 Winners and Losers of Round Four

Every round of footy has the winners and losers on the scoreboard, but what about the individuals?

Yes, we’re all aware it’s a team game, but looking a little more closely at the game you can identify just who really won the round, and just who lost it.

Here’s The Mongrel’s winners and losers of Round Four.

So this is the player the Dogs have been waiting for?

English has been the best ruck on the park for successive weeks. Last week he took old man Sam Jacobs to school, and he was back this week to dispense of the Naismith/Sinclair combination. It seems he is now using that big tank to simply run people off their feet.

Not a moment too soon for the Dogs.

Kicked four out of six goals and was one of the few genuine winners for his team. The Swans are also winners here, inasmuch as they were losers, but the play of Papley means that should he elect to try to run away to Carlton again, the price continues to rise.

Papley looks like he is the main threat to the All-Australian small forward slot, currently held by Charlie Cameron.  How these two duel for the spot will make for one of the more interesting storylines of the year.

It’s happening. He is going from infamy to genuine fame.

Greene was the difference in the Giants’ win over the Pies, and his ability to beat his man in one-on-one contests was pivotal in the contest. You know when your direct opponent applauds you that you’ve done something very, very right.

Would be nice if he could get a free kick at some stage.

After threatening for so long, maybe this is the season Big Charlie delivers. Currently averaging over three goals per game, he is looking like a man who knows he is going to take a mark when he flies for it.

He did it against a very good defender, in Tom Barrass and if Dixon stays healthy and confident, Port Adelaide will take some beating.

You’ve gotta love this story. He was an afterthought for many in terms of the St Kilda recruits, yet after Round four he has seven goals to his name and many of the Tiger smalls he left behind are struggling, or sitting games out.

The St Kilda set up is a different one than he was used to seeing at Punt Road, and he looks to be relishing the chance to have a little more freedom. Maybe the recruit of the season to this point.

The hits just keep on coming. This wasn’t my game to cover, but there was his name again, right up there in the votes again.

That’s three consecutive weeks we’ve seen Rowell’s name up in lights as one of, if not the best player on the park. Can he make it four? And who do we start comparing him to if he does?

Did a mountain of work against Brodie Grundy and had a point to prove after looking like he couldn’t jump over a piece of paper in the Preliminary Final last season.

Applied great pressure on the Collingwood big man around stoppages and limited his clearance work as a result.

Sam Docherty continues to deliver for the Blues and it seems as though opposition coaches are completely willing to let him.

He had 32 touches in this one at a whopping 92% efficiency and has been absolutely killing it all season.

Shifted onto Zach Merrett at the commencement of the last quarter with the specific instructions to keep him quiet.

The bloke sin this position for the Cats this arvo were Cam Guthrie and Sam Menegola, and they were matched up on two blokes brought to the Demons to fill the wing roles and provide run and carry.

And it was the Cats’ pair that held sway in this, and in a way influenced the result. Gurthie and Menegola combined for 49 touches in this one, outdoing their opponents, who had just 35.

Having a bit of a forward career renaissance early in 2020, with three bags of three goals and is looking very dangerous around the contest.

Might be the leader of the Hawthorn best and fairest at this stage.

Two in particular  – Curtis Taylor and Tarryn Thomas as they put the Kangaroos on their back in the last quarter and almost pulled off one of the best comebacks in recent history.

Both young fellas pulled down soaring grabs in the last stanza as their flat-footed opponents could only watch on and hope they could run out time. It turns out they could – bloody shorter quarters, huh?

Nick Blakey had an overhead mark cleanly spoiled by Caleb Daniel on Thursday night. No ladder, no lifts in his shoes… just a spoil, and it is indicative of where Blakey is at this season.

With so much potential, where is John Longmire going to play him permanently?

I feel bad writing this, because he is such a great player. Four games into his best season, it might be all over for Howe. A huge collision with Jacob Hopper (who went hard and low – just like you’re taught) saw his knee bend at an angle that is not natural.

His loss to the Pies is huge and will test the resolve of this group. We wish him a speedy recovery.

Not a good afternoon at the office for Will or the Eagles, and it is probably harsh to single him out. However, his headbutt to the increasingly annoying (in a great way) Zak Butters was the kind of poor discipline that would have Adam Simpson tearing his hair out.

And at that point, had Schofield had any hair, Simpson may have pulled that out too.

Geez, after a withering 2019 blast, the storm known as Sydney Stack has fizzled to a drizzle. Maybe he could rap that?

Made a few horrible, fumbly errors on Saturday and looks like he is missing that which made him special last season.

The last chance of the Dockers getting over the Suns and getting their first win ended when Nat Fyfe’s hamstring went twang!

Limping into a bottom of the table showdown against the Crows next week, Fyfe would have been odds on for a BOG performance. Alas…

Who takes the wrap for this one? Sam Docherty left alone in the back half ALL GAME by the Essendon coaches, and he tore them to shreds. Not once was there a player sitting on him making him work and beat an opponent for his possessions. And he had 32 of them!

Wow, was that a glass AC join? Or a glass clavicle?

I’m definitely not going to be putting my hand up to engage in a bumping contest/test of strength any time soon after seeing what happened to Tom Stewart. I guess that ends his run of All-Australian guernseys.

THE LAST SIX MINUTES OF ‘FOOTBALL’ FROM HAWTHORN

Cue in the rack stuff from Clarkson’s boys, bordering on arrogance, with North Melbourne coming home like a train on the Craigieburn line and The Hawks stuck in traffic on Macaulay Road.

Embarrassing and weak. Lucky to get the win.

I’ll make this one brief because they were both pretty bloody good except for this point.

Between them they had 13 shots at goal.

Between them, they kicked one goal.

If they kick straight, this game is an absolute blowout.

Starting to look like a player who definitely cannot handle close attention.

Had Just 12 touches with Matt de Boer to contend with and was sent forward to break the tag. It didn’t work.

Has history of falling in a heap when confronted with a defensive-minded mid, such as Mark Hutchings in 2018.

Got any winners and losers of the round you’d like to add? Feel free to add them. Keep my name out of it, though.