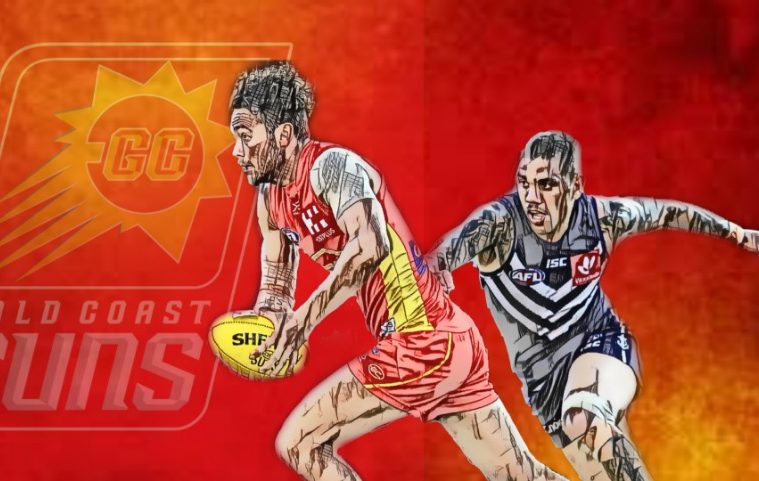 Truth be told, I couldn’t think of a time in the short history of the Gold Coast Suns that I, or anyone outside of Queensland, actually gave a flying fig about the organisation. That was before they shocked everybody and toppled the West Coast Eagles with relative ease. Now this was before the Eagles starting going downhill with the results on field, talk about them being fed up of the quarantine hubs and everything else sandwiched in between.

Since then, the Suns have been playing football that have made everyone stand up and take notice. Last week they completely dismantled an Adelaide team that is already up to their neck in problems both on and off the field, and on Saturday night, they added their third win on the trot against a Fremantle side that, whilst still winless, have been more competitive than what 0-4 might suggest.

With this win, the Suns are sitting outright second on the ladder (pending results on the Sunday). Season 2020 is delivering some of the most bizarre results in recent time, but this is pretty much taking the cake so far. The Suns have been the early fairytale team of the season – from Matt Rowell’s prominence, to the improvement of players such as Touk Miller, Lachie Weller and Wil Powell to the finds such as Brandon Ellis, Connor Budarick and Hugh Greenwood. This Gold Coast team has been arguably one of the more fun teams to watch from the restart.

I was keen for this game from outset. I’ve mentioned my reasons for the Suns above. Whilst from the Dockers perspective, under Justin Longmuir, Fremantle have been very competitive in all of their games this year – and yes, I’m even counting last week, as they held their own against Port Adelaide for three of the four quarters.

It was pretty much all systems go from the outset. Rowell (my god I’m going to love writing about this kid in the next 10 years) set the tone early, breaking a Nat Fyfe tackle and then dancing around Fremantle players on the wing. The stats by quarter time indicated that it was the Suns dominating general play. They were well on top of the clearances and centre clearances and were +10 in inside 50 entries. The only thing that was letting them down was their efficiency early.

As a result, the Dockers were able to capitalize on the Gold Coast turnovers – the Suns had four more in the opening term – and held a one goal advantage at the first break. After Brandon Matera kicked the opening goal of the second term, we got to witness the Gold Coast Suns at their most awesome. When they run and spread, they are a thrilling team to watch – No Gil, I’m not going to use the term ‘sexy’ to describe them.

The Suns kicked the next five goals in the space of ten minutes. Ben King was on the end of two brilliant pieces of play – I love watching him gallop out on the lead and taking a mark with his arms extended – there’s something about that I just can’t get enough of out of him. Jack Bowes was electric running down the wing and his deliveries inside 50 were just simply sublime. And then Matt Rowell, with a snap on the non-preferred foot to send them three goals clear.

It should also be pointed out that neither team had kicked a behind at this stage of the game, and there were rumblings about whether this would be the most accurate half of footy in the history of the game. Whilst we were all worrying about that, Freo were worrying about not having another second-quarter fadeout and pegged the deficit back to a goal before half time, kicking two majors in quick succession

A first half without a blemish on the scoreboard. 7.0 to 6.0 – in no game in the history of the league have we witnessed a first half as accurate as this. As a bonus, we got treated to a big scuffle at half time. Just some points I took out of it: The first being Matt Taberner untucking Matt Rowell’s guernsey before putting Sam Collins in a headlock was priceless. Secondly, Michael Walters punching the back of Charlie Ballard’s head whilst he was in amongst the scuffle was gutless to say the least. And finally, watching the veteran Pearce Hanley butt heads with first-gamer Caleb Serong was fun to watch – maybe that is because I like a good all-in push and shove.

The second half in its entirety was tightened up as the surface of Metricon Stadium became more dewy as the evening progressed. With the scores level heading into three-quarter time, the Dockers were dealt a blow when captain Nat Fyfe was seen with ice on his hamstring. Whilst his performance to this point was nothing to write home about, with Hugh Greenwood standing him at stoppages, he made a huge effort to smother a kick which led to Brett Bewley kicking his second goal of the evening just moments before coming to the ground, so you could sense that could’ve been a game changing moment to the good of the Dockers.

But it all changed as Fyfe’s hamstring went kaput. The Suns went ahead early in the final term following a lovely kick on the boundary from Jack Lukosius and then followed up with a beautiful snap in the pocket by Ben Ainsworth – it’s no coincidence that it is the high-ranged draft picks that delivered here. You could see the Dockers make a push to get back into the contest, but defenders like Sam Collins and Charlie Ballard held the fort in defence in those closing moments.

The Suns were 3-1 this time last year as well. The only difference between this year and last is that while last year – well in the first half of the season at least – they were just a defensively stingy unit. Whereas this year, not only do they have that rock-solid defence, they look more polished and more prepared to take the game on. Their kicking skills have also improved dramatically and they look like they’re going to be capable of running out games this year.

One last thing about Rowell, because I feel like I’ve raved about him enough. I don’t think I’ve ever felt so hyped about a first-year player since Michael Barlow playing for Fremantle a decade ago. Can he win the Brownlow in his first year? Well 2020 has already delivered a plethora of bizarre results, so don’t be surprised if he’s thereabouts at the end of the season. He’ll probably get the three votes out of this game

Jarrod Witts is the third best ruck in the league. He dominates the hitouts (38 hitouts), covers ground exceptionally well (five marks and 12 touches) and isn’t afraid to get his hands dirty in the contest (three clearances). I also thought Touk Miller was super impressive in the middle, he was such a presence and a big reason why the Suns won clearances with such ease – 20 disposals, seven of those coming from clearances.

Brandon Ellis played a beauty, rotating between half-back and the wing, with his 20 disposals and seven marks – hard to believe he’s continuing to win games up on the Gold Coast while his former teammates drop them. Wil Powell did plenty of nice things with his 17 touches – please don’t sleep on him, the kid has pace and often knows what he is doing when the football is in his hand. Darcy MacPherson was lively around the contest and the veterans in David Swallow and Jarrod Harbrow were solid without playing a starring role.

Oh and I’m just going to say that Sam Collins gets underappreciated so damn much as a key defender and it’s time to stop it and recognize that he is just as every chance of getting an All-Australian as Jacob Weitering, especially if the Suns keep winning games of footy. Charlie Ballard will be in a similar boat in a few years as well – watch this space on the Suns as they rise the ranks in the coming years.

As for the Dockers, I will start by saying how much I enjoyed watching Hayden Young in just his second game. He had a couple of moments where he held up strong in defence, taking a few intercept marks, which was then followed by fluent kicks out of defensive 50. Serong – when he wasn’t in the middle of the half-time scuffle – did a few nice things in the middle, five tackles and 12 touches is a nice return on debut.

Darcy Tucker (20 disposals, five tackles and four marks) played a very strong game in the middle. I like Tucker, he’s like your traditional inside midfielder – not the flashiest player by any means, just someone that digs in with little fuss and more often than not, gets the job done. Matt Taberner busted hard up the ground and found plenty of the footy – took plenty of marks too. Likewise to Jesse Hogan, the two Freo bigs combined for 20 marks. Michael Walters also played a very nice game, and did everything from kicking goals to winning clearances and contested ball.

Ethan Hughes and Griffin Logue stood tall down back. Logue had the job on Ben King for most of the night and except for that five-minute period he was on the receiving end of a couple of luxury hits on the lead, he held him well. Hughes did his best to rebound the ball out of the defensive half, with Luke Ryan and Nathan Wilson having pretty off-nights by their standards.

Where to for the Suns? How high can they finish this season, and how will they fare when the inevitable long road trip occurs? Do the young legs start to tire, or has the maturity they’ve added given them the experience they need to fight through when the going gets tough on the road?

In a season unlike no other, the Suns have added another element and the league is better off for it.