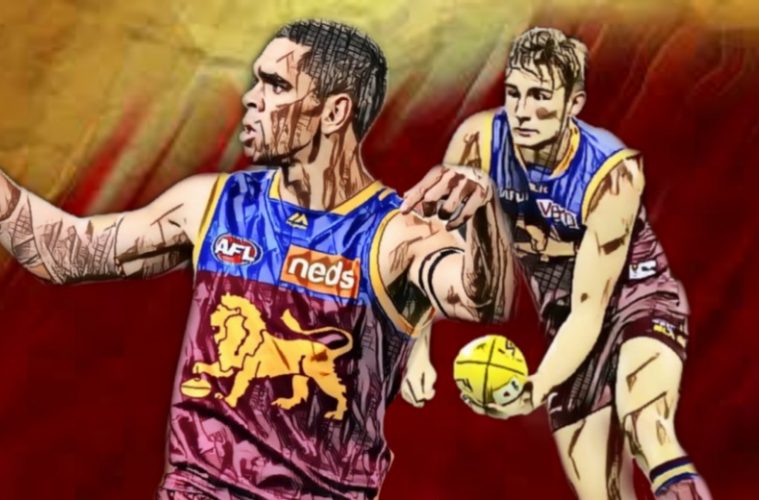 The winless, bottom-of-the-ladder Crows took on a strong Lions outfit at the Gabba, in front of fans for Cam Rayner’s 50th game. Brisbane should’ve put the game away early, but a Taylor Walker-inspired third term saw Adelaide work back into the contest; however the youthful Lions sit pretty in third while the Crows appear to be still adjusting to life in the hub and in the cellar of the AFL.

When wanting to kick along the ground its important not to give away a free kick but Charlie Cameron, who does little wrong, saw the opportunity to get a clean toe poke away in congestion on the wing in the fourth term. The lobbed kick found its way to Daniel McStay who looked inboard to Hugh McCluggage. Daniel Rich, as he normally does came bolting past for the handball receive and sent a long bomb from 65m out, into a semi-open forward line that saw the ball bounce once and through for a goal. It was a play that started with Cameron and finished with a defender running forward.

Archie Smith with the centre clearances

Brisbane ruckman Archie Smith at times collected his own ball and kicked it forward, largely to a positive result. One such instance saw him hit Eric Hipwood right on the chest. Hipwood sprayed the kick for his second behind of the afternoon but it should not diminish the work of Smith.

When he wasn’t crumbing his own tap, he was tapping it to the advantage of his midfield. With Neale and Rayner often combining, one play in the second term that saw Cameron slot a goal on the run, 40m out, starting with the good ruck work of Smith.

Charlie’s Mark of the Year winner?

The buildup to that moment was good, as Brisbane looked to continue their momentum. However, seemingly frazzled and caught up in his own moment, Cameron didn’t elect to go back for a set shot, instead handing it off to Hugh McCluggage, who added to his total of behinds for the day.

The problem with Charlie Cameron being so electric is sometimes he can produce moments where things don’t go quite as planned, such as when he ran onto a loose ball and was parked tight in the pocket. He attempted to centre it to a waiting three-on-one contest and an advantage to the Lions, but should’ve given the ball a bit more elevation. Instead, he dribbled it along the ground and despite the outnumbered nature of the contest, the Crows were able to rebound. Maybe his mind is a little too quick for his feet at times.

Lions looking out for each other

Players from both Brisbane and Adelaide were prepared to put their bodies on the line, whether it was laying a bump, shepherding or only having eyes for the ball as they ran back with the flight. Lincoln McCarthy did it a few times for the Lions.

While both sides looked the get away to hot starts, McCarthy’s first half, registering two goals, was great. Also, his willingness to put his body on the line and make something out of nothing, especially close to goal added to the Lions’ attack.

It was nice to see Cam Ellis-Yolmen chipping into to provide a subtle block later in the game, allowing McCarthy a free run at another mark with the flight – Lions working together.

Neale had four disposals (including just one kick) to quarter time and 11 at the half as he was well held by Ben Keays. Neale then broke through the tag and inserted himself into the game in a massive second half, ending the match with 31 possessions, with 13 of them coming in the contest. He was involved in 13 of the Lions scores, although six of those were his own. The only downfall of his performance – six behinds, possibly seven if Oscar McInerney wasn’t ruled to have marked it on the goal line after a score review.

Despite his team’s woeful performance across most of the contest, Walker inserted life into the Crows camp when he was involved in their first three scores after the main break. The former Adelaide captain kicked two goals himself before setting up Billy Frampton who converted from the square. The latter goal proved just how useful Tex can be in a one-on-one contest. As his opponent went to ground, Walker stood tall to tap it to his advantage and kick towards goal. Frampton took a necessary mark just centimetres from the goal line.

There are few hard-nosed, big-bodied players in the competition and Robinson is one of them. His attack on ball, and opposition players is evident and often gets rewarded by creating turnovers. He has great awareness and a tenacity and is unafraid in the modern game to still lay a bump, as he was ready to do on Rory Sloane as the two headed towards the ball from different angles. He ranged to all areas of the ground in this one as he recorded  17 disposals, 12 of which were contested. He’s a bull.

McCarthy lit up the Gabba in the first half with two almighty grabs, including one running back with the flight. Both big marks resulted in goals to give the Lions a continuation of their first-half onslaught. The crafty forward can leap and should’ve reined in some more marks, and even had multiple chances to add to his tally with a few wayward toe pokes deep within their forward line.

Largely going unnoticed, Berry is an important factor in the Lions lineup, leading the match with ten tackles after he too had a slow start to the game with just four disposals in the first quarter. Eventually ending with 19, Berry is a player who instills plenty of pressure intoo the Brisbane midfield, evidenced by his 18 pressure acts and ability to keep the ball inside 50. He laid three of his tackles in the forward arc, rewarding his teammates too as he was credited with nine score involvements and two goal assists.

Charlie Cameron’s kick around the corner

Why, oh why Charlie? It’s no surprise that Cameron is able to create plenty of magic in a game but this decision to kick around the corner in the third term was dreadful from the livewire. Cameron got Luke Brown wrapped up in a tackle for holding the ball and from 15m out on a 30 degree angle, Cameron, as many players do these days, chose to set up for a kick around the corner. It didn’t work out for him as he put too much on it for it to hit the closest goalpost.

That is drop punt territory. Do players not learn from previous games, such as Rayner’s miss against North Melbourne last season? The miss saw Adelaide go coast-to-coast and Ben Crocker snag a goal at the other end. Costly

Daniel McStay all by himself as Adelaide caught in a fracas

Eric Hipwood doesn’t have the best frame for a key forward but his can still outmuscle his opponent out of the contest, as he did in the first quarter. Despite marking 20m out, Hipwood saw McStay running into an open goal with Daniel Talia too late to react to the lone Lion. McStay was able to get clear as most Adelaide players were off jostling with Rayner as Hipwood was setting up for a kick. The result was an easy goal to McStay and some red faced Crows.

Push one way, not the other

Through the first term, a throw in deep in Adelaide’s forward 50 saw Oscar McInerney push Billy Frampton in the ruck contest, the Crow earning a free kick. He may have milked it a little but it was certainly there and the big man slotted Adelaide’s first of the afternoon. Later that quarter, there appeared to be an identical push, this time on Adelaide’s forward flank where Tom Lynch was pushed from the one-on-one contest from Brendon Starcevich. The Lion marked unopposed as Lynch went sprawling, – that one should’ve been overturned.

The score review called in for another marking attempt

It seems to appear every week, a call for a review on a claimed mark. This time it was McInerney taking the ball on the goal line. It what looked to be two attempts at the mark was adjudged a mark, following a Neale set shot. Perhaps it could’ve been better for the decision to be judged a behind as McInerney sprayed the kick around the corner from the tight angle, out of bound on the full, on the other side of the goals.

Brisbane really need to address their goalkicking during the week. 10 goals, 23 behinds is not a pretty score and despite a cruisy win, this had the makings of a 12+ goal win, as was their dominance throughout most of the game. Easily gettable goals too alluded the Lions, as even in open looks, the kicks were sprayed. It’s certainly not what Chris Fagan would like to look at from his star players – Neale and McCluggage kicking six and five behinds, respectively.

Brisbane provide moments of brilliance all too often

The Lions are a team filled by young stars and emerging talent and when they string together beautiful passages of play, it deserves to be recognised. Brisbane’s first goal came from a smart toe poke from Jarrod Berry to Hugh McCluggage that allowed him to react quickly and run into goal. Charlie Cameron is an excitement machine and really got the Gabba crowd buzzing, whenever he has the ball you know something good is bound to happen but it’s the small things that should see them fare better this season and through finals.

Adelaide’s lack of… anything

Adelaide had two scoring shots to half time, one from each quarter as the Lions ran rings around them early on. Repeat inside 50s from the Lions had the Crows on edge and the constant pressure saw Adelaide falter. For the first ten minutes of play, the Crows had no possession in their forward half. It’s a similar story to last week against the Suns where they had three first half inside 50s. This week it was five. It was the same situation in the second quarter too for the Crows, unable to find the ball in their possession in their half of the ground for large patches.

The dominant Lions of first half of the game were equal-to or improvements from their form across the season so far, both team-wise and player-wise. Four minutes into the second term, Brisbane had eight contested marks, where they averaged 7.7 in the three previous rounds. They finished with 21 for the game. Seven minutes into the second quarter, Brisbane had scored 22 points from stoppages, an avenue where they average 21 for the season before this match. And also in the second quarter, two of Brisbane’s goals had come from centre bounce stoppages, a number they average across the season.

Taylor Walker still has a lot of fight in him

Even though he handed over the reins as captain to Rory Sloane, Walker is still as much the leader he was in seasons gone by.  He was the in-form player of the third term, helping the Crows to be within 18 points at the final break. Walker lead up at the contest, took strong grabs and held his own in one-on-ones.

Whether he was drawing a free kick or bodying himself out of traffic for the ball, he can still use that big frame of his. Under fire recently, Walker still spearheads the Adelaide attack and with Tom Lynch in a new role on the wing, this game could’ve been the one to reignite Walker’s back-half of his career. Still, one or two grassed attempts at marks that he should’ve eaten will haunt him.

Overall, the Lions played footy for three quarters and the Crows for just one. Inaccuracy probably flattered the Crows in terms of margin – I am not sure how often Lachie Neale and Hugh McCluggage will miss goals like that.