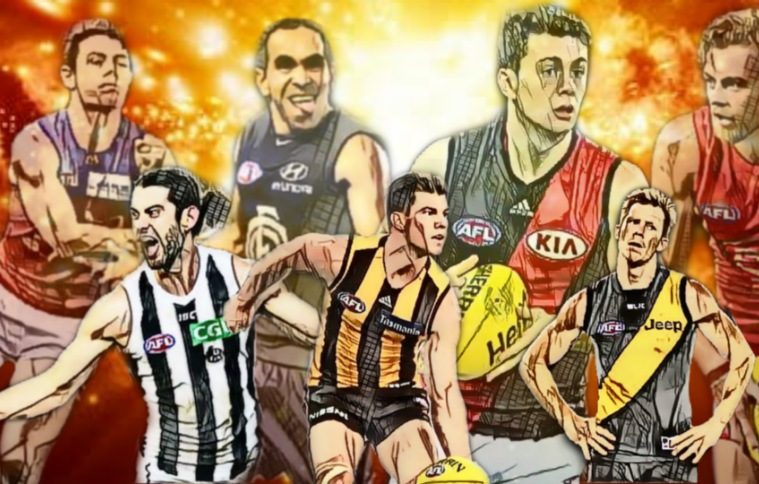 The Winners and Losers of Round Three

The AFL season provides many twists and turns. One week, you’re the star and the next you’re incurring the wrath of supporters for a huge error.

It’s the way of things, and whilst we don’t like to focus on the negative too much at The Mongrel, what we will do it point out the bleeding obvious here and there.

As such, let’s launch into the Round Three version of the Mongrel’s winners and losers.

We saw a beast unleashed at the MCG on Saturday afternoon. Rising to the challenge of the player many assume will be the next big thing in the ruck department, Grundy responded with the sort of game he made his regular gig in 2019.

With 20 touches, 12 contested possessions and four tackles, Grundy quickly established himself as the dominant big man on the park, taking down both Rowan Marshall and veteran, Paddy Ryder in the process.

Did you hear people during the week, talking about how long a premiersip buys you as a head coach? They were talking about Bevo, and more than any coach in the league, he needed to win against the Giants.

They didn’t just win – the Dogs stood up physically, endured all that the Giants could dish out, and gave a bit back en route to their first win of the season.

Following on from Bevo, the second winner of the Dogs-Giants clash was the returning Libba.

One must wonder how the Dogs would have responded with him in the line-up last September when the heat was on. Liberatore is built for the scrap, and when the argy bargey started on Friday night, he was one of the Dogs leading the way, not only in standing up for his teammates, but in winning the hard footy.

The Sydney forward line without Buddy Franklin was supposed to look ordinary, but with their 2019 leading goal kicker, Papley, and the young powerhouse, Heeney now the focal points, things are not looking all that bad for the Swans.

Papley was involved in some brilliant sequences to set up goals, and the marking of Heeney in the third quarter in particular, was excellent. With Nick Blakey and Lewis Taylor adding their own influence, the Swans are by no means out of the finals race.

Yep, Hewett did this week what Matt de Boer was unable to do last week – shut down Shaun Higgins.

With Ben Cunnington ruled out of the game, Hewett turned his attention to the Kangaroos’ prime mover and slammed the handbrake on the Rolls Royce. Higgins finished with just 11 touches as Hewett refused to give him any space at all.

He’d have to be leading the Brownlow after this round and was the standout midfielder as the Lions put the Eagles down on Saturday night.

As many of the high profile Eagles mids fumbled and hacked their way around the Gabba, Neale went about his merry way, handling the footy like it was the middle of the day as he amassed 32 possessions and controlled the middle of the ground.

Harris Andrews, Darcy Gardiner, Tom Jonas and Tom Barrass got to kill contests like they were Twitter killing off the accounts of anyone who isn’t a left winger. Ohhhh, political stuff from The Mongrel. Stay in your lane, right?

Andrews, Gardiner, Jonas and Barrass all controlled the air and absolutely destroyed their fancied opponents as they made taking a contested mark inside 50 rarer than a clean body in Joe Ganino’s house.

Ah Eddie… nice to see you back.

Matched up on regular Betts-killer, Jed Bews, Eddie started well snagging two goals in the first quarter, but it was late in the game that Eddie made his presence felt. With the game on the line, it was his efforts to get the ball forward and then lay a game-saving tackle on the no-left-foot Jack Henry to ice the game.

I’ll be honest – I don’t expect a lot from Betts this season, but if he can bob up and offer what he did for the Blues on Saturday night, I’ll be glad to sit back and watch him turn the occasional clock back.

Geez, the Hawks missed him last week, and he was back to his bustling, fending best against the Tigers.

O’Meara took on the pressure of the Tigers and dismissed it, travelling at 91% efficiency for his 21 touches. As Tom Mitchell continues to work his way back into form, O’Meara could be the key to the Hawthorn midfield.

There are a few forwards that could take a contested marking lesson from the big Port full forward, who not only outmarked his opponents, but did it in pouring rain as well.

Dixon ripped the game apart in the second quarter as the rain came down and affected every player on the ground. Except Dixon, who managed four contested grabs in the wet.

Not only did the former Crow register an equal career-high in tackles (yes, he has had 13 twice before), but he did it against his old team in a performance indicative of the two teams passing each other – one on the way up, and one on the way down.

Greenwood found it difficult to squeeze into the Crows midfield at times, with the Crouch Brothers and Rory Sloane largely occupying the contested mid roles. His move the Gold Coast seems to have come right at the perfect time, as the Suns look to be a side on the charge.

And as if his hard work on the ground wasn’t enough, Greenwood then gave a bit of a Twitter lesson to the Crows as well.

It had to be someone, didn’t it? After an off-season of “will he/won’t he?” and a season that saw him depart for Ireland and play a game of Gaelic footy without informing the club, McKenna went one better and became the first AFL player to contract Covid.

On form, the only Bomber more likely to contract it, given his last 12 months, was Orazio Fantasia.

At this stage it appears McKenna broke several AFL rules in terms of activities, I think he may be on the sidelines for longer than just 14 days. he won’t be a popular fella.

I didn’t like his game at all, and after talking him up to start the season, I almost feel let down by his lack of impact on the contest against the Swans.

The Roos will come to rely on his run and carry, and in the first quarter he was a non-factor, picking up just one touch. He had plenty of mates who were down on the day, but Polec had just 12 touches for the day, and so much more is required.

Another poor performance for the young Tiger.

Maybe he is unfairly labelled and assessed due to the famous name, but back-to-back six disposal games at a time when the Tigers are really needing a spark speaks volumes about where he’s at.

With both Jason Castagna and Jack Higgins have mixed bags in terms of their games (at least Castagna made an effort in the last quarter) could we see Rioli dropped from the side, or will Hardwick and co. opt to keep the faith and hope he repays it?

The complete opposite of the listing in the “winners” section. Jack Darling, Josh Kennedy and Daniel McStay were as useless as a hat full of arseholes for the most part.

Whilst McStay managed to snag one goal for the game, the real worry is with Josh Kennedy.

In 2020, the two-time Coleman Medallist is averaging 4.7 touches per game, which is by far the lowest output of his career. And goals? He has just two for the season. if he cannot get going against the Power next week, I’m afraid a “rest” against the Tigers in the dewy Gold Coast evening has to be on the cards.

Of course, I wrote this bit before Charlie Dixon taught a few of them what COULD be done by a big forward in the wet.

The 2018 Coleman Medal seems so far away now, doesn’t it?

Jack hasn’t had a great start to the 2020 season, held goalless for the past two weeks and looking a little like the petulant Jack of years gone by.

The Tigers have a date with the Saints under the roof at Marvel Stadium this coming weekend. The time for Riewoldt to bust out of the slump is now. Failure to do so will increase the level of chatter about his form, and his place in the side.

Brought to the Giants to offer a solid ruck presence and an upgrade on the ailing Shane Mumford, the form of Sam Jacobs has to be a huge concern for GWS.

He was soundly beaten by the AFL’s most recent ruck whipping boy, Tim English in a performance that can only be described as embarrassing. Jacobs won the hit outs but was completely exposed both forward and back as he failed to impact the contest and also allowed English to range far and wide, largely unimpeded.

Was it a wise investment, Giants fans?

After an Covid-enforced break that didn’t go all that swimmingly, the Cats showed a bit of faith in the former Saint. And he is yet to repay it.

Look at what he’s signed up for. A bunch of one-pace players who look like they don’t give a shit.

I reckon he heads back to the hub tonight, watches the tape, cries a little and then starts wonder about who he can offload after the 2020 season in order to give this team something.

Til then, he is stuck with this rabble.

AND TO FINISH OFF…

Matt Rowell will be captain of the Gold Coast Suns by ……..

In the off-season, the Adelaide Crows will trade ……..