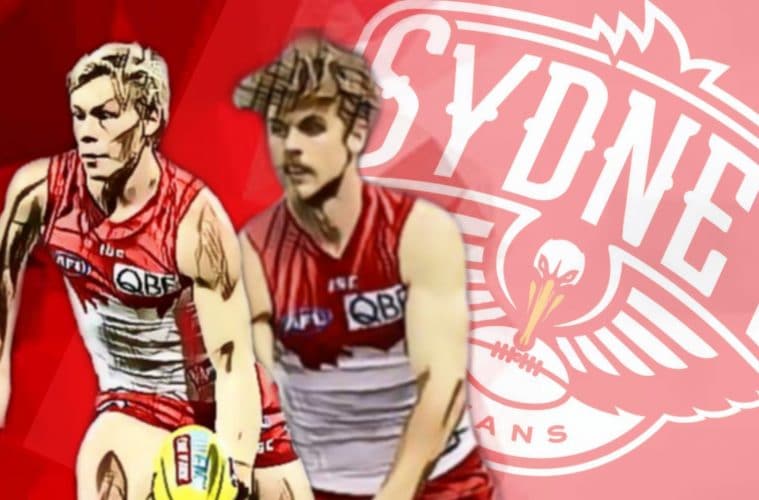 The Sydney “bloods” spirit was on show in their victory over North Melbourne at Marvel Stadium. Driven by a more consistent midfield effort and solid defensive output, Sydney proved too strong for a sloppy Roos outfit. Here are the heroes & zeroes from the game:

Arguably best on ground, North’s young midfielder came of age today, delivering a premium midfield performance across all four quarters in the absence of North’s powerhouse, Ben Cunnington. Simpkin racked up 26 touches and a goal, but most impressively, 14 bites of the Sherrin came in contested play.

It’s no doubt Simpkin has the grunt required to be a future Shinboner leader. In fact, he has the potential to be a future skipper. Hard at the ball, a hard runner and with a smooth kicking ability to boot, Simpkin is deserving of three Brownlow votes for today’s effort.

With Cunnington out, the focus of the North midfield shifted to Shaun Higgins, and so did the attention of George Hewett. Last week, under considerable attention from Matt de Boer, Higgins broke the shackles, but he was unable to do so against Hewett, who restricted him to just 11 disposals for the game.

It was a class tagging performance from Hewett, who has demonstrated the ability to win his own ball when required.

Ben Brown burst out of the blocks with two early goals and it looked as though he was set to lead the Roos to a big victory. Enter Dane Rampe. Brown could have had four goalsin the first quarter, but following that Rampe wore him like a glove for the next three terms. Always clean, calm, cool and collected, Rampe provided plenty of link-up options for the Swans midfield brigade, patrolling the backline with composure.

It was also testament to Rampe’s ability to come back from a situation where he had his colours lowered, to take control of his direct opponent and have a big influence on the outcome. Well played, Dane!

Heeeeeney…how good is Isaac Heeney? I’ve always been a fan of Isaac and still find it hard to believe that he is only 24 years of age. Heeney’s aerial talents were on show today, with the blonde number five clunking eight marks, with several of them coming at crucial points of the game. But it wasn’t just Heeney’s marking which impressed me – it was his gut running too! Heeney was all over the park for the entirety of the game, constantly providing a marking option higher up the field. Mr consistency, Isaac Heeney, delivers again, and now that he has been established as the Swans’ number one forward target, we can expect some big games from him this season.

One has to wonder whether, if he had his time over again, if Rhyce Shaw may have left Jasper Pittard on Heeney instead of allowing youngster, Kyron Hayden to be victimized by his bigger, stronger and more experienced opponent?

After Luke McDonald did the job on Toby Greene last week, this match up had huge potential. And it was the dangerous Tom Papley that came out on top.

He finished with just two  goals, but his ability to create resulted in seven score involvements and two direct goal assists. when Papley touches the ball, good things happened.

It’s not harsh to accuse the former Sun of being greedy, just look at the source of his three behinds today. Hall’s knack of blazing away without considering more appropriate marking options was all too obvious, with the enigma taking wild shots at goal multiple times. North actually looked great with Hall on the run, and indeed, he nailed a lovely goal on the eve of three quarter time, but he needs to remember that AFL is a TEAM game. If I’m Rhys Shaw, Hall is out next week.

Barely sighted, the Swans forward had a shocker today. His poor match was summed up when he gave away a silly free kick for shoving Jasper Pittard toward the boundary fence with the footy already well out of play. Hayward is incredibly talented, but needs to work harder on the outside. With just six touches and a goal, Hayward needs to add to his skillset and diversify from being just a “small forward” and become more agile across the half forward flank.

The “bull” has become a cult figure at Arden Street in recent times, but he was sloppy and silent today. Zurhaar’s biggest weakness, his left foot, became apparent today, with some errant kicking costing his side several scoring opportunities. I’m a big fan of Zurhaar’s willingness to crash the contest, but he just seemed “off” today. There wasn’t the usual grunt that has become a mantra of Zurhaar’s football in today’s game, maybe he just had one of those days. I’m sure the bull will be hungry for success next week.

Well below his best, the North runner could not get into the game in the first quarter, registering just a solitary disposal. He finished the game with 12, but could not get any of his trademark run and carry, collecting just 90 metres for his team for the entire contest.

He is capable of so much more.