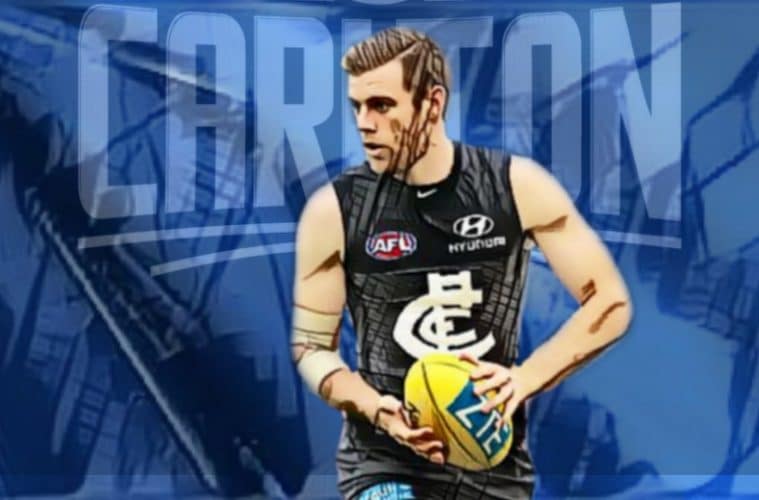 A Star Is Reborn

Does it look to you as though there is one player at Carlton relishing the chance to be out there again in 2020?

Win, lose or draw, Sam Docherty’s return to the Blues after two seasons on the sidelines would be cause for celebration, but really, did anyone expect him to be playing at this level so quickly?

I didn’t, and I am more than okay admitting it.

Not that I wished him any ill-will at all; I am as thrilled as anyone to see him playing at an elite level across half back and using those foot skills to turn defence into attack with the kind of ease that makes you question if he’d  actually been gone from the game at all. I just thought it would take a lot longer for him to recapture the form that saw him secure an All-Australian berth in 2017.

It seems so long ago that we watched Docherty patrolling the defensive 50 for the Blues prior to this season. He was 23 years old with the world at his feet in 2017. He looked like a footballer, carried himself like a footballer and more than that, was a leader at the Carlton Football Club. Whilst the footy world has gone nuts for Patrick Cripps, it was Docherty the Blues chose to lead them into the future at that point. They saw the oak tree in the acorn.

But they didn’t see the axe chopping him down. Twice. No one did.

In 2017, he led a Carlton team to a 6-16 record. However, that would be the last time he would lead the team for a while, on-field at least. For the next two years, their captain was forced to sit out and rehabilitate his knee. If 2017 feels like it was a long while ago for me, it must have felt like an eternity for Carlton supporters. And even longer for Docherty, himself.

However, as we head toward Round Four of the 2020 season, we are seeing some signs that the Blues are now more settled with their leader back inside defensive 50. His combination with star backman in the making, Jacob Weitering and the enigmatic contest destroyer, Liam Jones has the potential to provide three pillars on which Carlton can build a solid defence.

Round Three demonstrated just what a potent combination they could be.

Liam Jones led the competition in spoils last weekend, recording 15 one-percenters as he floated across contests and spiked the ball at will. Jacob Weitering wrestled and tussled with Tom Hawkins and did not take a backward step, gaining the points in their match up as well. And then there was Docherty.

Recording an AFL season-high 14 Rebound-50 disposals, the general of the Carlton defence provided the composure the Blues have been sorely lacking for several seasons, with 23 disposals – nine of which came as the result of intercepts.

Watching Docherty slotting into the role he was so good in around 2017 has conjured images of Luke Hodge at Hawthorn. The influence Hodge had in his “general” role was the driver in three Hawthorn premierships, and though Docherty has had his premiership dreams… postponed, if not derailed by injury, the value he provides to Carlton may the ingredient that leads them back to the Promised Land.

The Blues are in the midst of the longest premiership drought in the club’s proud history; 25 years and counting.However, with this current nucleus – and I know you’ve all heard it before, could the Baggers be about to turn things around? For good, this time? Is this group better positioned and better balanced than the teams that boasted a young Marc Murphy, Bryce Gibbs and Matty Kreuzer?

And how important is Sam Docherty in the grand scheme of this pending reversal of fortune?

Statistically speaking, Docherty is obliterating the competition this season. In his three games, he is at the top, or not far from the top of several categories as we head into Round Four.

Docherty is ranked first in the competition in Rebound 50s. Averaging ten per game, he is 11 clear of the next best defenders in this category – James Sicily and Jeremy Howe.

He is ranked fourth overall in intercepts, with 8.67 per contest. The leader is the reigning All-Australian full back, Harris Andrews on 10.33 per game.

Doc also sits third in average metres gained, behind only Ed Langdon and Michael Hibberd, though it should be noted that Hibberd has played just one game. Doc has been able to maintain his high standard across all three matches to date.

Finally, he sits fourth overall in marks per contest, with 7.3 per game to his name.

With his name in the top handful of five distinct statistical categories, there is no other player in the game who can boast an output to rival Docherty at this point of the season. Maybe he should head into the ruck and bump himself up in hit outs to truly astound everyone?

Looking from the outside, it quickly becomes apparent that those around Docherty are getting nowhere near enough credit for the jobs they are performing to insulate their captain. The Carlton defence has worked incredibly hard ensure the returning captain hasn’t been placed in situations where he is isolated too often. Instead, as a team they have worked diligently to free Docherty up to the point his best weapons – his decision making and delivery – can be deployed to the betterment of the team.

However, even then there have been moments of uncertainty amid the positives. His aimless disposals in the dying minutes of the game against Melbourne – a game the Blues should have won – had Carlton fans burying their heads in their hands, with many questioning whether this team actually knew how to win. However, out of the negative came the positive of Docherty raising his hand, as a leader should, and taking responsibility for those errant disposals.

Those were the actions of a leader. Even when things do not go to plan, you step up, accept responsibility and let the media cards fall where they may. His actions as a leader were also prevalent in the response to the most recent racist abuse leveled at Eddie Betts. Again, Docherty was the one stepping forward to support his teammate.

Docherty’s support in defence has been outstanding, but if you were to remove him from the mix, how would the rest of the Blues backmen fare? Weitering and Jones will still form a formidable big-man duo, and if Nic Newman remained healthy, he could have been serviceable in Docherty’s role. As good? Probably not, but serviceable as he was in periods last season.

Asking any more of Kade Simpson at this stage of his career is a bridge too far, and as great a servant as he has been to this club, the clock is now ticking quite loudly for him. Caleb Marchbank is still a couple of weeks away from contending for a spot, and Will Setterfield has shown promise. The jury, however, remains out on him. That leaves Sam Petrevski-Seton, who has been thrown into a half back role this season. Whilst he could develop into a good run-and-carry player he lacks the composure of Docherty at the moment. He also lacks the presence.

There are few players who command the footy in AFL defences. When Sam Docherty calls for the ball, the Carlton defenders give it to him. Occasionally, this may sell him into trouble, but it is trouble the Carlton co-captain will gladly take on.

And to this point of the season, he is passing every test with flying colours. He is taking on the responsibility of being the man in the Carlton defensive 50, and he is relishing the opportunity. Two years on the sidelines will have that effect on a player.

In game one of the 2020 AFL season, the Carlton supporters I know seemed relieved that Doc had simply made it through without re-injuring his knee. How he played didn’t seem to matter. You can understand why. To see a player cut down in his prime not once, but twice, would be heartbreaking. For it to happen to one of the players you’re building your team around – doubly terrible.

However, with three games under his belt in 2020, I reckon expectations on Docherty may have risen considerably since then. I cannot see it fazing him at all.

Compared to his 2017 AA year, Docherty looks to have lost very little. If anything, he has got better in ways that matter. Quality over quantity.

The only thing that could be conceived as negative is that he is -3.53 in disposals, but there are positives to outweigh that.

He is +2.4 in intercept possessions

And he is +82 in metres gained per week.

This, in a season that boasts 20 minutes per game less actual game time.

It is easy to jump on a bandwagon. Look at what happened last year with Sam Walsh and what is happening with the Gold Coast and Matt Rowell right now. It’s a run ride as the Suns start their climb out of the AFL cellar, but with Sam Docherty once again wearing he navy blue, Carlton may start to show that this “forever rebuild” may finally be ready to be complete.

One player does not make a team. If that were the case, the Blues would have already won a flag on the back of Patrick Cripps’ one-man wrecking crew efforts in the middle of the ground, but with Sam Docherty re-joining the fold, the Blues’ top-end players look significantly more solid.

Can the Blues make a run at finals in 2020? Can Sam Docherty provide the stability and poise that has been missing so often over the last couple of seasons? And how will the rest of us put up with Carlton fans if they manage to get a bit of a run-on this season?

We heard it for the first time in 2020 last weekend, and I think we may have to start getting used to hearing it a bit more.

Da da-da da-da… it’s music to the ears of Sam Docherty, his Blues, and the army of supporters ready to jump back on as the Blues turn the corner.

And if they keep Doc healthy, it could be sooner than many think.