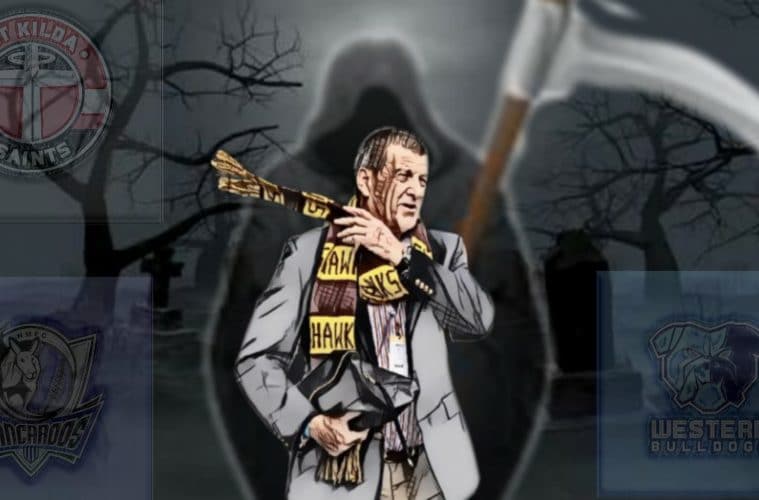 Good suggestion Jeff, let’s do that.

The Hawthorn president has stated that the AFL needs to create some off-field KPI’s for clubs to meet in order to remain in the competition or be relegated to the VFL in future years (Apparently all 18 clubs come from Victoria), which would effectively doom those clubs to a continued cycle of failure, relegation and possibly extinction in relatively short order.

After claiming that he would not be a loud president at one stage, the former Victorian Premier has remained one of the more outspoken figures in the game – almost as vocal as Collingwood’s Eddie McGuire, which is amazing given McGuire has a media platform to espouse his views. Kennett just seems to yell them from the rooftop.

Still, people tend to listen to him – that’s undeniable. Thankfully, they don’t listen all the time.

So, given Jeff was actually serious about his suggestion, why don’t we go about our own little experiment of creating some of these KPI’s.

I think we should follow the Kennett school of thought, from his previous examples of solving this problem when in power. Let’s get clubs and the league to sell off all of their long-term assets to have an injection of funds to fix any current financial issues. There’s no need to worry up about these other, private entities taking control of these assets. They won’t take advantage of us or our members, and we’ll meet the current criteria and stay solvent and remain in the AFL.

Again, we look to the almighty teachings of Kennett. Let’s scrap all the extra talent pathways and development programs into the AFL like the way Jeff ripped the guts out of the technical schools. It won’t matter if we fall into a dearth of talent in the future that will need to be rectified. We have a national under-18’s competition which will feed us all the relevant potential players we need. Why bother with other styles of development except for the one that will ultimately lead the most successes. And while we’re at it, let’s do away with any extra development coaches or extra services offered to players. I’m talking hard cuts. The only players coming in should be ready-made to play in the competition.

You need members to run a club, yes? NO! the only members you need are coterie members and sponsors. If you can throw in a state government which can compensate for the amount of low-end memberships you sell every year, that’s perfect. Offer them a pittance and demand absolute loyalty and premium returns, whilst denying them an opportunity for a team of their own. It’s not a long-term solution to assist the game, but that’s not what this is about. This is about not being relegated right now. If you fall short on members don’t worry – we can always bump up the numbers by offering them to people’s pets or just handing them out as part of your clubs’ school programs (that’s if you haven’t cut those programs already).

Finally, investment for the future.

Not Kennett’s strongest attribute, but we know he definitely favours certain industries. Let’s invite our mates the gambling companies, privatised parking and commuting companies, to take up a seat on every AFL board and invest in the technology available to push further outside revenue into the AFL coffers. It’s the way to do big business.

This has been an obvious piss-take, as I originally thought Kennett’s suggestion to relegate clubs was – I mean seriously, how can he relegate the Fremantle Dockers, or GWS Giants to the VFL? It was an obvious shot at several Victorian-based clubs from a bloke that NOW happens to sit at a club that isn’t a financial ruin. Short memories…

In reality, we’ve really only experienced the downfall of one club in Victoria. That was Fitzroy. And 25 years later it still draws an emotive response from fans about the bitterness of how it all unfolded.

Kennett’s push for once again reducing the number of Vic clubs is as stupid as it is reckless. And it’s an easy call for a president of currently “strong” club to make. I wonder if he knows how many clubs have faced the idea of extinction over the last 50 years.  I wonder if he realises how many clubs have stared the reality right in the face, only to be saved by their fans, members, sponsors, power brokers, other clubs, or even the league itself.

For crying out loud, it happened to his club!

When this topic has come up in recent years, we usually hear three clubs mentioned (outside of Gold Coast which has barely had time to develop a core fan base). Those clubs are North Melbourne, the Western Bulldogs and St. Kilda.

Clubs like St. Kilda, North Melbourne and the Western Bulldogs offer the AFL something that the likes of Essendon, Hawthorn, Collingwood and Richmond, and interstate powerhouses like Adelaide and West Coast can’t…

They offer a unique character.

Actual Australian character of the underdog rallying against the powerful and refusing to be pushed around. It’s what makes the North Melbourne teams of the 90s special, and should have made that powerhouse St Kilda teams of the late 2000s and 2010 so memorable. It’s why the entire footy world, possibly sans Sydney rejoiced with the Dogs as they won the flag in 2016. Triumph over adversity is one of the key components of what makes sport so bloody great!

Presidents should be allowed to talk about footy. But Kennett really needs to stop pushing these agenda’s when his own track record shows that they don’t really work all the time, particularly in the long run, and particularly for rank and file members of the public and his organisations.

“Here’s a comment I’ve never heard at a presidents meeting; ‘Good suggestion, Jeff, let’s do that’.”

Whack… and deservedly so.