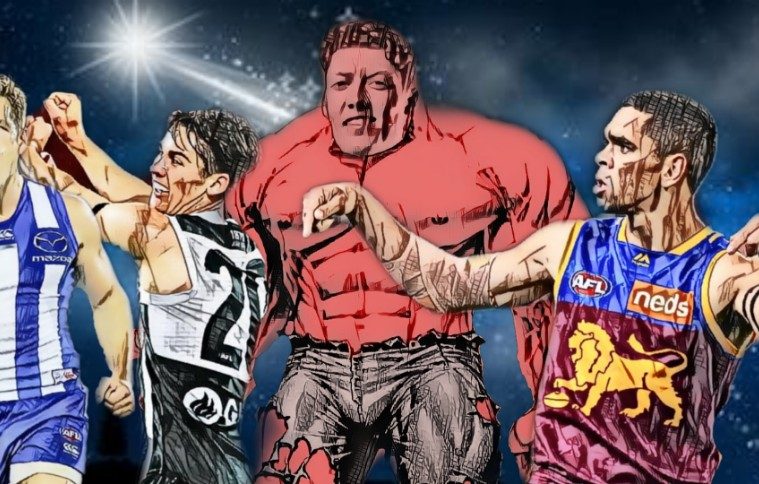 Ten Things I Learnt After Round Two

TEN THINGS I LEARNT AFTER ROUND TWO

This is bizarre, to say the least. I’m trying to understand the rationale behind this decision but have come up empty. The season is already shorter than normal by seven games, so player welfare can’t be the reason.

Do they think maybe the long lay-off might leave players open to injury late in the quarter perhaps? Did our illustrious Victorian CHO Brett Sutton tell the AFL that the last four minutes of each quarter is when you’re most susceptible to COVID-19??

All I know is, that I don’t really get it.

In what was another bizarre set of circumstances, two sides who many believe will be in contention for 2020 honours managed just five goals apiece in what was the scrappiest affair of the round. In fact Collingwood managed just one goal after quarter time and just three behinds for the second half.

Kevin Bartlett was scathing in a tweet suggesting the game has gone backwards and is a poor spectacle, but he may have jumped the gun as the Cats came out and smashed 17 goals out on Friday night.

The Magpies and Tigers played out a draw in the end, but it was possibly the single most boring tied game in sporting history. When the siren sounded, instead of the usual feelings of exasperation one feels after watching a draw, I was just happy the game was over.

3 – Geelong will be the team who have benefited most from this pandemic.

Geelong already have the most enviable home ground advantage of any of the Victorian teams. They have three out of this Four- Round block at home and their players have not been inconvenienced in the slightest thus far.

They play Carlton at home, Melbourne at the MCG, then the Suns at home. They should be 4-1 after Round Five and sitting pretty. They’ll be praying that Dopey Dan remains on his power trip and doesn’t ease restrictions too much through July so this can continue.

4 – Is Charlie Cameron the best small forward in the competition?

In the first half, the guy was on fire. At one stage I was wondering if he was going to kick eight or more goals. After half time his influence was quelled and Freo were able to stay close enough to almost pinch a great win on the road.

I still rate Cameron very highly, but it does seem that, like many small forwards, he plays in bursts. The concern for me as far as Brisbane goes is that it seems that stopping Charlie goes a long way to keeping Brisbane to a losing score. I think the key to any side playing against the Lions this year is to make sure Charlie is held. If you let him off the leash, he’s going to hurt you.

5 – Carlton should just dispense with formalities and give teams a five-goal start and skip the first quarter.

As a Blues fan, I can’t tell you how frustrating it was to watch that first quarter. And as bad as it looked, I still got the sense we would come back at them. In the end, the Blues should’ve won the game, but that losing culture developed over the last 20 years is just too strong, and poor decisions by Sam Docherty and Sam Walsh in the dying stages handed the Dees a narrow win.

For Melbourne fans, it’s a shame that the home and away games will run through September. That old cliché of the Dees fans going to the snow has taken a real hit this year, although by Round 12 they may be chucking it in and inviting their Blues fans along too. This shortened season will still be a long one for these two teams.

6 – The Eagles and Dockers are probably the two worst off teams as a result of the pandemic.

The Suns were impressive. But when you consider a side with a playing list like the Eagles managed just one goal after half time against a side that hasn’t won a game in over a year, you have to factor in travelling and playing under lights in slippery, tropical conditions. Those circumstances left them vulnerable to a side who always seem to start seasons well.

I’m pretty sure that the WA Premier is now considering re-opening their borders to allow football to be played in Perth before the season gets away from West Coast. Standby for an announcement shortly…

Footnote: If people thought Sam Walsh was impressive in his first year, I’d say they’re about to be blown out of the park by Rowell. WOW!!

7 – It’s an early call, but Port look the goods with no signs of second-year blues from the kids.

Port Adelaide have only had 64 points scored against them in the first two rounds. Many thought nothing of their smashing of the Suns in Round One, but after the Suns’ performance last night, followed by the absolute dominance over Adelaide this week, it would be a brave man to suggest the Power won’t be thereabouts come Round 17.

Their kids haven’t missed a beat. Connor Rozee is a star! Then you have the likes of Duursma and Marshall being among Port’s best and you have a very “Rozee” future indeed.

It’s great to see a club that can develop its high draft picks into solid contributors well before they hit 50 games. It’s no coincidence that cellar-dwellers like Carlton have failed to do that time and again and have failed to make any marked progress.

On a side note, wasn’t it great to see Port wearing the prison bars on Saturday night, if for no other reason but to piss off Eddie Maguire. I hope he follows through on his threat to sue the club for wearing the black and white stripes. I hope it sends him and Kochie broke!!

8 – A total of 47 TV workers went to Giants Stadium to watch GWS take on the Kangaroos smashing previous attendance records.

Yes, it’s low hanging fruit to pick on the Giants’ inability to draw a crowd, but after capitulating in the final term to a hungrier Roos outfit, if this is the sign of things to come from the GWS playing group, attracting fans in the Rugby League stronghold that is Western Sydney will only be made harder.

Shaun Higgins was again at his brilliant best, and at age 32 just seems to be aging like a fine wine. The Roos all of a sudden find themselves 2-0 facing a struggling Sydney outfit in Melbourne next week. Rhys Shaw would love a dream start with three wins to open this strangest of all seasons no doubt. Big win on the road.

9 –  Teams that fly together win together!

The Bombers and Kangaroos apparently shared flights to Sydney today and both performed admirably. Sydney and GWS fly together to Melbourne next week so it might be worth having a sly bet on dual victories there.

Essendon’s season has got off to a good start in what has been two narrow wins against sides many think probably won’t contend for the finals. McDonald-Tipungwuti seems to be the spark, and Merrett was outstanding in a best afield performance.

I fancy the Bombers’ chances next week against a Dees outfit that don’t seem to be capable of reaching great heights in 2020. Just like the Roos they may well find themselves 3-0. As for Sydney, they’re far from terrible and had chances to pinch the match today. What they would give for a fit Lance Franklin is anyone’s guess, but I’m guessing the result may have been different if he were out there.

10 – Is Bevo the coach under the most pressure right now?

It’s been a pretty lean period since that freak 2016 Grand Final win. I’m beginning to think that Luke Beveridge has no credits left in the bank from that one. Sitting at 0-2 in what can only be described as fairly insipid performances, many who expected the Bulldogs to build on last year’s finals placing would surely be reconsidering right now.

In a season of just 17 games, the four winless sides have a mountain to climb to be in contention. It may be a strange year, what with COVID-19 and all, but will that save the Dogs’ coach from the chop if they missed the finals? I’m sure the club will consider all options come season’s end – if not, sooner. Am I jumping the gun? Maybe. But I’ve seen coaches moved on for less