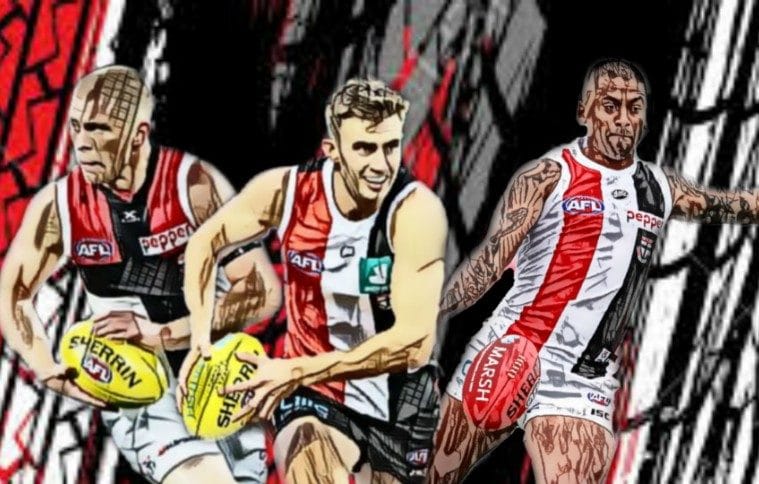 Two losses in two games and sitting plum-last on the AFL Ladder for the Dogs. One thing for sure is that it makes Friday night’s game against GWS even more important now.

It’s been three months apart from the round one loss to Collingwood and the 39-point loss to St. Kilda on Sunday night, the nucleus of whatever style of play that Luke Beveridge is running with is still pretty apparent. The fast-handball approach has been figured out, but still, he remains insistent that it’s a core piece to the plan. The plan for what, I do not know, but it sure as hell doesn’t involve being in the premiership calculations this year

Much like the Collingwood loss, St. Kilda went out and did as they pleased for large portions of the game. The only difference being that the Bulldogs had control for the largest part of the opening quarter, and had some moments thereafter, but it just wasn’t good enough for four quarters. After the Saints kicked the opening goal of the game, the Bulldogs had their opportunities to make the most of having the game on their terms.

Unfortunately, the common theme of butchering opportunities in front of goal came back to haunt them. How much difference would it have made? Well your guess is as good as mine. But watching the likes of Sam Lloyd, Laitham Vandermeer (I’ll get to him) and Bailey Dale all miss shots from straight in front and Aaron Naughton also missing a snap from close range from a tight angle, was painful. Meanwhile, a bloke that could barely hit the scoreboard in 2019 slams through three goals straight. Billings was on a mission in this one, and Saints fans who have waited what seems an eternity for him to break out would have been smiling after this game.

Then there was the horrific Bulldogs defensive transitions. I reckon the Saints must have kicked at least seven, eight, nine – probably more – goals from turnovers from their defensive 50, and I’d say all of them were met with very little resistance from the boys wearing red, white and blue. That was perhaps the one thing that ticked me off the most. The Saints had 17 more disposals than the Bulldogs yet had eight more tackles.

In simpler terms – St. Kilda wanted it more; much more than the Bulldogs, who looked more comfortable rolling through the motions when they didn’t have the ball. The Saints were much more direct, and when the opportunity to ‘go’ presented, they certainly made the most of it. The number of poor tackles the Saints broke through – I’d love to get a final number on that, because I reckon that was astronomical and worthy of a side that should be sitting on the bottom of the table.

The next thing is Dogs’ trouble with selection. I’ve heard it being dubbed a few things as of late: Selection Bingo, Chook Lotto – I even saw a GIF on Facebook of a darts player with Luke Beveridge’s head taped on it, throwing darts at a dartboard that had the names of Billy Gowers and Ryan Gardner. After Sunday, I wonder if that’s what actually happens at the selection table on Thursday night, because it’s an absolute debacle.

Gardner was already copping some big criticism for his skills in round one. This game did him no favours whatsoever and Gowers is a real goer, make no mistake, but lacks the finesse and the football IQ to be a mainstay in any best 22. He hardly got near the footy. I could not tell you why players like Tom Liberatore, Jackson Trengove, Josh Schache and Toby McLean are getting overlooked in favour for players like these two.

I was also a bit skeptical of Laitham Vandermeer getting a game ahead of the names mentioned above, but he did show some positive signs around the ground. I also thought it was pretty daring not to kick it to Bontempelli in the second quarter though – the kid’s got some moxie. He was also often dangerous whenever the ball went near him, and he kicked his first career goal, which is a positive. I wouldn’t mind seeing him in the team for next week.

Should these horrible trends continue on into the coming weeks, then Luke Beveridge should be facing some serious heat. We are now four years removed from the premiership and it feels like this team is stuck back in 2018, and that was one big diabolical mess. The club, as an entity, should not be stagnant at this stage – Covid-19 or not, just watching it all unfold on Sunday night was embarrassing and the fans need to know why.

Bulldogs fans are loyal to the cause, but right now, they are ropable because now it’s three very bad losses in a row and with the Giants coming up on Friday night, it’s looking like it’ll be another bad loss on the horizon. Is it a mentality issue? Is it something more?

I could talk on and on about the Doggies that struggled, there were many. But I’ll just quickly highlight two players. I think Tim English is a good player around the ground, he gets in the right spots and has capable marking hands, but I wouldn’t mind seeing what Jordon Sweet has to offer in terms of ruck craft – we don’t have much else to lose do we?

So what about the Saints? They won, right? I’ll admit that I might have underestimated them in the lead up, but after Sunday, there was plenty to like if you’re a Saints’ supporter. They needed to bounce back from their second half meltdown in round one, and they did that superbly. I guess we’ll know more about where they are really at in the next two weeks: Collingwood and Richmond at the MCG and Docklands respectively – win at least one, and plenty might actually stand up and take notice.

Recruit Zak Jones was mighty impressive on the wing and, at times, in the centre bounces – so strange that the Saints gave up only pick 32 for him, he’s proving to be an absolute bargain already. Speaking of bargains, Dan Butler was very dangerous as a forward. The Saints got him for pick 56, he looked very good. Jack Billings was very strong, floating between forward and midfield – 24 disposals and three goals will tell you that the number three pick in the 2013 AFL Draft had a better game than the bloke taken a pick later in Marcus Bontempelli.

Jade Gresham, Seb Ross, Jack Steele – all three were also instrumental in beating the Dogs in the middle. Dan Hannebery showed plenty of class, Hunter Clark and Bradley Hill were damaging on the run. Dougal Howard’s job on Aaron Naughton was very good and whilst I will argue he did a lot of holding off the ball, if you get away with it, more power to you.

Callum Wilkie had a strong performance down back as well. Rowan Marshall had the better of English in the hitouts and Max King kicked a couple of goals and had good looks at the footy at various stages – He is going to be such a player in a few years’ time, as three contested marks indicate.

Before signing off, I have to gravitate back to the Dogs – I’m sure you can feel the angst I have at the moment.

I was very disappointed with Jack Macrae. He couldn’t get anywhere near it until the end of the game and when he did, he got ambushed by Saints players – probably the first time, he actually got some close attention and lost out, which could actually speak more about the problems this club faces internally.

In terms of positives, Josh Dunkley responded to a very poor showing in round one and he looked back to his best in terms of what he is capable of in contested footy. He had eight tackles, 28 disposals and a goal in the final quarter and he had some support in the form of Bailey Smith (29 disposals, 15 of them contested and five tackles), who I thought didn’t stop trying all game long. Marcus Bontempelli had his 24 touches – and you can definitely see he was trying to make things happen, but couldn’t get anything clicking.

I’m happy that Lin Jong is back playing footy again. It’s been a good 660-odd days since he’s played a footy game, and he showed that he deserves a spot in next week’s team. He had 17 disposals, and whilst he made the odd mistake or two, he wanted to get himself involved in the contest. That’s the kind of effort I want in all 22 players. Ed Richards also made his way back in the side this week and tried taking the game on at numerous phases on the wing, I

Also, Patrick Lipinski, looked good early, getting his hands on the footy eight times in the opening quarter, and whilst he finished with 22 disposals, I thought he looked pretty good whenever he had the footy in his hands. Him and Richards on the wings will have an important few weeks to prove their worth with Lachie Hunter not in the team. Bailey Williams too, who I thought did plenty of nice things with his 14 disposals.

The recruits at St Kilda made a real difference in this one. Butler was great inside 50, Hannebery was serviceable, Jones was electrifying and Howard’s defensive positioning was very good. They’ve done some great work in the off-season, and reaped the rewards on Sunday evening.

The Saints come up against Collingwood this week, and if they can bust through that solid Magpie defence across half back, their zippy players like Lonie, Billings, Gresham and Butler could cause some havoc.

Round Three just got really, really interesting for both the Dogs and the Saints.