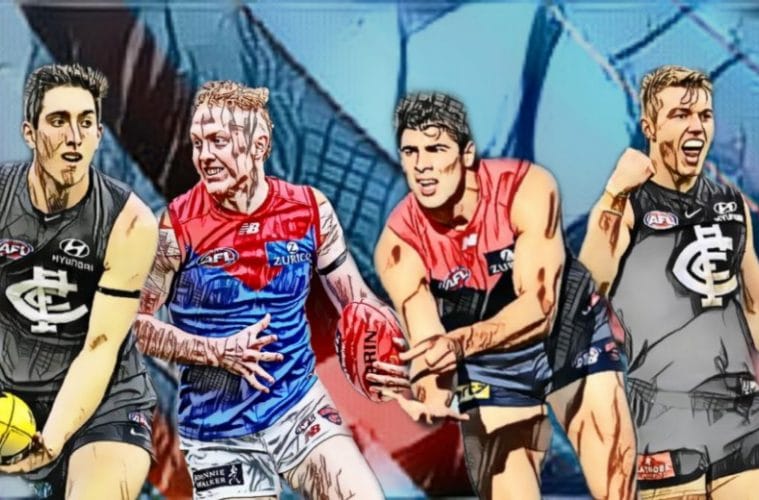 It’s been an intriguing return to footy to say the least. Two of the competitions top flight teams dishing up utter drivel, some questionable reviews and an interesting mix of artificial crowd noise and on-screen graphics.

However, some things remain constant no matter what, and Carlton dishing up a goalless quarter is one of those things – welcome to a not so quick yarn.

An up and down game for both sides, only one-point separated the two sides after the final siren, Melbourne emerging victorious 8.6 (54) to Carlton 7.11 (53).
Among the best for the Demons were Max Gawn, Christian Petracca and Clayton Oliver. While the Blues were fuelled by Sam Docherty off half-back and although he was quiet to begin with, Patrick Cripps as the game turned more in their favour.
THE TALE OF THE TAPE
This was perhaps as predictable a game as we could have had. Carlton got off to a poor start, completely overrun by Melbourne thanks to the likes of Gawn and Petrecca – who perhaps has finally arrived. However, in typical Demons-fashion, their 42-point lead quickly dissipated and as the pressure mounted they had no response other than dumb luck.
Fortunately for Melbourne, they were playing Carlton. Once again the Blues had their moments and produced passages of footy that would really excite fans, but when push came to shove, they didn’t have what was necessary to take the four points.
The Demons trounced the Blues early with five first-term goals courtesy of the dangerous duo of Bayley Fritsch and Jayden Hunt.
Things went from bad to worse for the Blues, who lost backman Nic Newman to a patella tendon injury midway through the second term.
Melbourne dominated the half because it played with confidence. Sure, the Blues weren’t great, but credit where it’s due, Melbourne came to play – albeit for only a half.
The Demons biggest issues are mental. As pressure builds, they crumble far too often.
The Blues have plenty of talent, as the second half demonstrated. They fought back admirably and had some periods were they played really good footy, they just need to learn how to string four quarters together. Too little, too late, too often.
The match ended in a comedy of errors, highlighted by a Bayley Fritsch behind from a gimme set shot that ultimately proved to be the difference.
Melbourne walked away – arguably – undeserving victors. Not to say Carlton was any more deserving, but I think a draw would have summed this one up nicely.
At the end of the day, the Demons were accurate in front of goal, while the Blues let too many opportunities go begging. There wasn’t much in this one and accuracy in front of the sticks made all the difference.
WE LOVE TO SEE IT
Petracca up and about
Fine, when the game was on the line, he went missing – but let’s not ask for everything all at once. Petracca did exactly what we’ve spent years hoping for and it’s a great sign for the rest of the season. 24 touches, 11 contested, seven score involvements and two goals. About. Damn. Time.
In all seriousness, congratulations to the youngster on a great game and all the best for the season ahead. Difficult not to root for someone constantly under so munch scrutiny (myself included).
Docherty healthy through two games
Say what you will about his last two minutes, I’m just enjoying watching this man back out on the park. 24 touches at 83% efficiency and once again, he served as a consistent rebounder for the Blues in tandem with Kade Simpson.
The road back hasn’t been easy for the 26-year-old and he deserves all of our respect for that way he’s gone about it.
Bennell back on the park
The long-awaited return came and went and it was…pretty good I suppose. Essentially, Bennell gave us all we could ask of him, nothing spectacular, but an honorable and solid return. A great story that’s far from over, hard to love seeing him back out on the park and in a similar vein to Docherty, I wish him all the best.
YOU JUST CAN’T HAVE IT
Harry McKay needs to do more
The poor set shots, the lazy free kicks – McKay is taking too long to mature. He’s an exciting prospect, full of talent but too often hurts his side. All this time to refine his shots on goal and seemingly very little change. It’s worth investing time and games into the youngster, but you’d love to see him grab this season by the horns and tonight didn’t bode well.
Against any other team, it’s a loss
Melbourne are weak mentally. Ever since the 2018 preliminary final, they’ve failed to show any ability to stand up against adversity. Maybe it’s the coach, maybe it’s the locker room, maybe it’s a little bit of both. Either way, the Demons were fortunate to get off the hook tonight and if they continue to drop leads, they will be found out and exposed very quickly against stronger sides.
KEY STATS
Shots at goal: Blues – 18, Demons – 14
Shooting accuracy: Blues – 39%, Demons – 57%
This sums it up pretty clearly.
OTHER THOUGHTS
Eddie Betts – Are we sure? Nostalgia aside, this makes little sense for the Blues. Look at tonight. He kicked a big goal, but only after he missed a sitter moments before. Eight touches in these shortened quarters is barely passable for a small forward and he saved 100% of his impact for a five minute period in the fourth. I love Eddie as much as the next guy, and I’m rooting for him – but he needs to do more if he’s going to justify his selection.
Finally, it’s awesome to have footy back – boy have I missed it. It’s such a staple of so many Australian lives and although it’s not exactly the same, I’ll take anything we can get.
Hopefully we can roll on through the season from here and you’ll all hear from me again next week. Fingers crossed.